What's the best way to teach kids about money?

That question has haunted folks for decades — maybe centuries. There are dozens of financial literacy programs in the United States right now, but none of them seems to be effective. Why is that?

I've written before about why I think financial literacy education fails. Here's the short version: Most financial literacy fails because it focuses too much on mechanics — how bonds work, the magic of compound interest — and not enough on behavior. While mechanics are key (they're the foundation, after all), they're not the most important aspect of financial success.

Financial literacy is not the answer. We've got to do something more if we want to teach our kids about money. 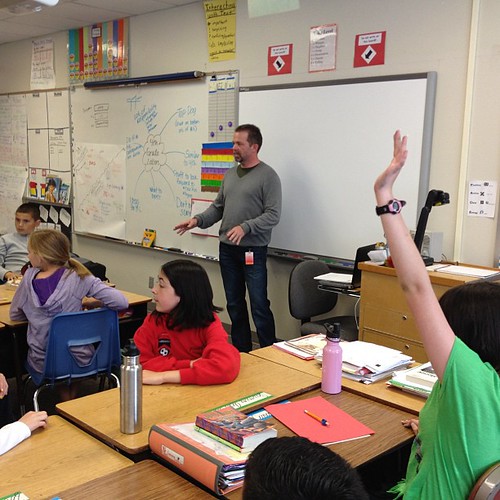 Last year, I spoke to a group of fifth-graders about money

John Hancock
Recently, I've had two great conversations about this topic. The first was with John Hancock, the president of the Portland chapter of Junior Achievement, a non-profit group focused on helping kids learn about money and entrepreneurship. He and I met for coffee last week, and we chatted about his own efforts to improve financial literacy.

Tip: Teach children the importance of creating an emergency fund. You can even go so far as helping them open their own online savings account, or one with a local bank to get started.

Like me, Hancock thinks it's important to focus less on the “how to” and more on the “why” when it comes to money. He wants to change behavior. His goal isn't to just educate young people about money, but (as he puts it), “to change habits of the hands and habits of the heart”.

Hancock thinks it's important to put people into active simulations, such as role-playing. To that end, his group puts on an annual event for kids called Biztown, which lets them experience a simulated city environment. The children take on the roles of various business and professional leaders in an interconnected community, and they learn how to manage their own personal finances. I know several kids who've done this program, and they love it. So do their parents. The experience seems to have a positive effect on their attitudes toward money.

The local chapter of Junior Achievement also produces The Money Jar, a weekly podcast about kids and money. (Last autumn, I appeared on an episode of this program to talk about how to build savings.)

I applaud Hancock's efforts, and hope to work with him in the future to improve financial education in our area.

Ron Lieber
Earlier this week, I had a long phone call with Ron Lieber, who writes the “Your Money” column for the New York Times. He's currently on sabbatical to write a book called The Opposite of Spoiled, in which he hopes to teach parents how to raise children with financial maturity.

Note: This was the first time Lieber and I have ever connected, though we've been aware of each other for years. After all, I write the “Your Money” column for Entrepreneur magazine, and my first book was called Your Money: The Missing Manual.

Lieber has some great insights about financial education. “Financial literacy works best when it's delivered in the moment on an as-needed basis,” he told me.

As an example, he talked about how sixteen- and seventeen-year-old kids make six-figure decisions about education with very little guidance. “The fact that these kids are making major financial decisions in complete ignorance is a crisis,” Lieber said. “We need a financial Americorps to go into high schools and help kids address important questions. Why go to college? Why do different schools cost different amounts? How does financial aid work? What about delaying school for a year or two?”

Lieber agrees that financial literacy efforts have largely been ineffective. He says they should focus on “feelings, behavior, and emotion — all of the things we've realized over the past decade that are at the crux of getting money right.” We talked about his book, and about raising children to be financially mature.

Note: Lieber is midway through writing The Opposite of Spoiled, and he's looking for more people to interview. If you have a great story about kids and money, he'd like to talk to you. Drop me a line, and I'll connect you.

“How do children become spoiled?” I asked.

“They're not born that way,” he said. “We do it to them. Nobody wants to raise a spoiled child, yet it happens all the time.”

One issue is what Lieber calls the “first-generation affluent”. When you were raised poor (or lower middle-class), there's a real temptation to give your kids the things you never had. You remember what it was like to feel deprived, and you don't want your children to experience that — even if a little deprivation might be good for them, might build character. (After all, it helped make you who you are, right?) “Kids should, at the very least, have to earn things,” Lieber says.

In writing about spoiled children, Lieber tried to think of what it meant to be the opposite of spoiled. Because the word “spoiled” was originally used to describe food, the opposite is “fresh”, which isn't a good choice in this case. “When we talk about spoiled children,” Lieber told me, “the opposite qualities are modesty, patience, thrift, generosity, perspective, perseverance, courage, grit, bravery, prudence, and so on.”

“That sounds like the boy scout law,” I said.

“The thing is,” he continued, “you can use money as a central tool to teach kids about every single one of these. Instead of shying away from the topic, what if we put money at the center of family conversations? What if we assumed not that money subverts values but contributes to them? Because it does. This is the path to financial literacy and financial education.”

Note: Lieber also loves the idea of opening a money store — some sort of business where folks can come in and get cheap, objective information about how to better manage their finances. He's done more research into the practicalities than I have. Neither one of us is actually ready to move forward with such a business, but we like the idea of it…

The Bottom Line
As always happens with these discussion about financial literacy, I don't have any answers — only complaints. Over the past few months, I've chatted with Flexo from Consumerism Commentary. He want to start a financial literacy non-profit, and I want to help him make that a reality. But neither one of us really knows what that organization will look like and how it will accomplish its objectives.

I'm not sure we need to have the answers right now, though. Maybe it's enough to simply be asking the questions. I think that's the first step in finding a way to children become masters of their financial futures.

Do you have experience with financial literacy programs? What methods have you found to be effective? What does not work? If you were to teach kids about money, where would you start?

There are 61 reader responses to "The Opposite of Spoiled: The Right Way to Teach Kids About Money".