I must begin this tale of consumer conflict — both internal and external — with four caveats: 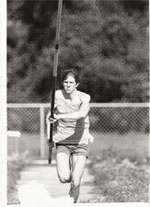 As a result, I recently spent $2000 — two-thousand dollars! — on this Catrike Trail recumbent bike: 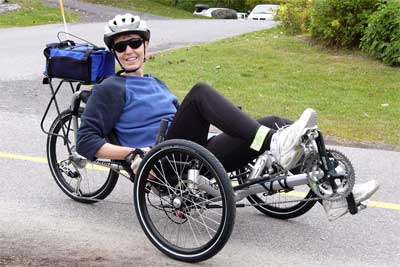 This isn't Robert, but this is what his expensive bike looks like!

It almost pains me to write that I spent $2,000. Except for houses, cars, and kids, I've never spent so much money on a single item.

That likely amazes you. It's certainly caused me to wake up in the middle of the night in a cold sweat (no kidding). The last two cars I bought were used and cost less than $10,000, so I'm not one who usually splurges on transportation. (This morning, I cut my lawn with a reel mower—the kind you just push — that I pulled from the garbage yesterday.) But if you look at the prices of similar-quality recumbents—trikes or otherwise—you'll see that this one is “budget-priced,” as Catrike says on its website.

Yes, I looked for used bikes on Craigslist and eBay (no luck, because these bikes are relatively rare and not mass-produced — they're hand-assembled here in the U.S. of A.). Yes, I visited several stores and tried out several makes and models, some that were cheaper. And yes, I absolutely love this bike. It's a blast to ride. So I bought it.

I rationalized this large purchase thusly:

If this article were following a classic dramatic structure — such as Freytag's pyramid — we've gotten through the exposition. Now, on to the conflict.

Pricey Wasn't Perfect
The day after I bought the bike, I rode it to work. It was a bit noisy, and a few times it shifted gears all by itself. I showed it to my bike-expert colleague at work (who, along with his wife, has several bikes, including two recumbent trikes), and he pointed out that the bike was damaged: a few scuffs and scratches, a chain too long for my height, and a bent rear derailleur (that thing the chain goes around before it gets to the gears on the wheel—mine rubbed up against the tire when in higher gears). While I was riding it around the office, the chain just fell off.

Note: Yes, you can ride your bike in The Motley Fool. It's not officially listed on our benefits page; it's just kinda part of the culture.

Now, I knew I was getting a demo bike. I was aware of the scuffs. The option was to take the demo, or have the shop order the bike, wait for it to get delivered, and drive back to the shop to get it (a 45- to 90-minute drive, depending on which of their two shops it was delivered to). Were I able to do it over again, that's what I would have done.

But I didn't. So I emailed the owner of the shop, explained the problems, and said I expected it to be fixed — or the bike replaced — plus something extra for trouble (either some money back or extra accessories). He offered to have it fixed it ASAP, but didn't offer anything else.

I asked again about getting something in return for the problems, and he replied, “These things happen to us all. They happen to all bikes and trikes, some for twice as much, not that it's easy when it does.”

And so I took the bike back to the shop. They worked on it and tested it for 90 minutes, and replaced the derailleur. Including travel time, the process took me three hours and a few gallons of gas.

I should note that, aside from this episode, the service at this shop was excellent. They're friendly, informative, and they let my son and me try out all kinds of bikes. But I still feel like I got a sub-optimal deal, especially given the amount of money I spent. The bottom line, for me, was that I paid full price for what turned out to be a damaged bike, and I had to spend time to get it fixed.

Determine the Dénouement
So that's the conflict. How should it be resolved? Or has it already?

If you were me, would you demand a discount or some additional accessories at this point? If you're a bike expert, does this sound like a big deal to you, or just part of buying a bike? Let me know in the comments below. I'll use your advice to decide what to do next, and report back on the resolution (if any).

And if you live in the Washington, D.C., area, please don't run me over.

Robert is a Certified Financial Planner, the author of The Motley Fool's Guide to Paying for School, and is the editor of the Motley Fool Rule Your Retirement newsletter service.

There are 95 reader responses to "The Perils and Pangs of a Pricey Purchase".