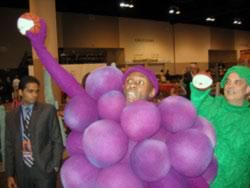 From what I can tell, there were no drugs, no free love, and just a little rock-n-roll. But the “Woodstock for Capitalists,” as the Berkshire Hathaway annual meeting is known, offered its own ways to expand the mind. This past weekend, I was joined by 35,000 of my fellow shareholders — a record crowd — in Omaha, Nebraska, to soak up the wisdom of Berkshire's chairman, Warren Buffett, and co-chairman, Charlie Munger. They didn't disappoint. Despite their ages (Buffett is 78 and Munger is 85) and recent performance (Berkshire's stock was down 31.8% in 2008), the two multi-billionaires had plenty to say, which means there was plenty to learn.

I attended the six-hour meeting on Saturday and the two-hour press conference on Sunday, so it would be difficult to boil it all down to just three lessons. But I'll give it a try anyhow. (Keep in mind, however, that no recording devices are permitted in these events, so when I quote Buffett or Munger, it's a close approximation of what they said, based on how fast I could type as they talked. And that goes for any other “transcript” of the Berkshire meeting you read.)

Lesson One: Everyone Suffered Last Year

Did your portfolio plummet in 2008? Don't feel bad. Most everyone's did, including those managed by some of the greatest investors in the world. Berkshire Hathaway posted its steepest decline in book value ever. And the people in line to succeed Buffett and Munger (when they eventually join the Great Holding Company in the Sky) reportedly didn't do so hot, either. Not that we know who the potential heirs to the thrones are; Buffett has people in mind, but he's not naming names.

But a shareholder did ask how they performed in 2008. Here's the response:

Buffett: All four are still on the list. We have three internal candidates for CEO, and four for the investment managers position; we could have one take that job, or all four. They did no better than match the S&P last year, down 37%. They didn't cover themselves in glory, but I didn't either, so I'm tolerant of that.

Munger: Practically every investment manager in America that I regard as intelligent and so on, they all got creamed last year.

Buffett: The four have a better-than-average record over the long term. There were a lot of things that didn't work [last year].

Munger: I don't think we'd want an investment manager who would want to go to cash based on macro factors. We think it's impossible.

Buffett: In fact, we'd leave out someone who thought he could do that.

I don't know about you, but it gives me some solace to know that we were all in the same boat last year. If 2008 was kryptonite to the super-investors, then I shouldn't feel so bad about the 25% to 38% drop in the model portfolios of my Rule Your Retirement service.

If you know Buffet's and Munger's biographies, you know they're wicked smart. In college, Buffett would read a chapter from a book and then recite it word-for-word from memory to impress his fraternity brothers. But you may also know that Berkshire's chairmen don't attribute their success to big brains. At this year's annual meeting, they once again returned to this theme. 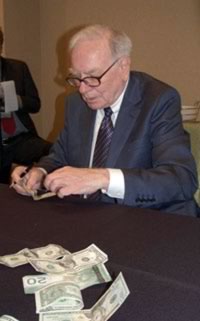 Buffett: You don't have to know how to value all businesses. You have to stay within your circle of competence, and pick companies that sell for less than what they're worth. Some don't lend themselves to valuations, so you should ignore them…If you are in the investment business and have an IQ of 150, sell 30 points to someone else. You do have to have an emotional stability and an inner peace about your decisions. It is a game where you are bombarded by minute-by-minute opinions. It's not a complicated game. It's simple, but it's not easy. You have to have an emotional stability.

Munger: There's so much that's false and nutty in modern banking and academia. If you just reduce the nonsense, that's all you can reasonably hope for. If you think you have an IQ of 160 but it's 150, you're a disaster. It's much better to have a 130 IQ and think it's 120.

In fact, Buffett and Munger often argue that high intelligence can be a hindrance, especially when that brainpower generates complicated mathematical models that purport to predict the future. In his recent annual letter, Buffett phrased it as “Beware of geeks bearing formulas.” Here's what they said at the annual meeting:

Buffett: False precision leads to Long-Term Capital Management [a hedge fund associated with two Nobel Prize winners in economics that almost brought down the global financial system in 1998]. It only happens to people with high IQs. Those of you with an IQ of 120 are safe.

Munger: Some of the worst business decisions I've ever seen are the consequence of complex calculations and projections. They do that in business schools because, well, they have to do something.

I won't tell you what my IQ is. It's higher than 120, and I suspect that's true of most GRS readers as well. But there's no way I could match the intellectual firepower of Buffett and Munger. It's heartening to know they don't think I have to in order to be a successful investor.

At every Berkshire annual meeting, there are shareholders who ask questions with an agenda in mind. This year, a fellow gratuitously promoted his hedge fund (Buffett eventually said, “We'll bill you for that commercial later”), and then asked this question: “If you owned 10 stocks, and five doubled, would you sell and buy the others?” To which they replied:

Buffett: We would buy the half-dozen stocks that we like best. Our cost basis, except in rare cases, doesn't have anything to do with [the decision]. We don't worry whether it was up or down. We worry about what it's worth compared to what it's selling for.

Munger: He's tactfully suggesting that you adopt a different way of thinking.

Buffett said later, “When we buy a business, it's for keeps.” That's how they think of the investments they own, and how they want investors in Berkshire Hathaway to think, too. It's best expressed in the first principle of the Berkshire Hathaway Owner's Manual (how many companies have an owner's manual?): “Although our form is corporate, our attitude is partnership.”

Charlie and I hope that you do not think of yourself as merely owning a piece of paper whose price wiggles around daily and that is a candidate for sale when some economic or political event makes you nervous. We hope you instead visualize yourself as a part-owner of a business that you expect to stay with indefinitely, much as you might if you owned a farm or apartment house in partnership with members of your family. For our part, we do not view Berkshire shareholders as faceless members of an ever-shifting crowd, but rather as co-venturers who have entrusted their funds to us for what may well turn out to be the remainder of their lives.

These guys clearly advocate buy-and-hold investing, even after a horrid year like 2008. They will and do sell, but not often, and only when the fundamentals change or they need to raise cash for better opportunities. It's certainly not based on what happens in the market. As Munger said at the press conference, “Judging how things are going by [what] the stock price [does] in a year is the wrong way to do it.” It's tough to argue with two of the richest guys in the world.

If you're not inclined to pick individual stocks, then just own a diverse group of businesses in a low-cost way, starting with an index fund (something I do with a good part of my money, and what Buffett recommends for the majority of investors). In this case, you're benefitting from the long-term growth the world's corporations (and they will grow over the long term — eventually). Holding on to a varied group of these types of investments, and buying more when they're down, sure beats chasing only what did well over the past decade.

On the plane back to D.C. from Omaha, I didn't leave completely reassured about the near-term. Buffett and Munger are skeptical about a lot that transpires on Wall Street and on Capitol Hill. But that doesn't mean they're selling their stocks and waiting for the perfect time to buy. In fact, they put $20 billion of cash to work over the past year. We'll give the concluding words to Buffett:

Buffett: I'm going to be buying investments for the rest of my life, and I like paying half of X more than paying X. It just makes sense that when things are on sale, you should be happy to buy…Any chance we have to do something that makes sense, we do it. If it makes even more sense the next day…there's nothing you can do about it. Picking values is easy. Picking bottoms is impossible.

This is the first of what I hope will be many articles from Robert Brokamp and The Motley Fool. If you have topics that you'd like to see Robert write about, please let us know. We'll do our best to get to them!

Are Pre-Nuptial Agreements For Everyone?