I suck at making plane reservations. That probably sounds ridiculous, but I'm not joking. Whenever I travel — which is fairly often — I put off booking flights because I find the process so tedious. As a result, I miss out on the best deals.

Turns out, I'm accidentally in luck. According to the research arm of the travel app Hopper (about which, I know nothing except it looks similar to Kayak), tomorrow is “Travel Deal Tuesday” — the best day of the year to shop for flights.

Based on its archive of “several trillion prices from the past several years” (!?!?!), Hopper writes:

Fare sale activity significantly spikes on the Tuesday after Thanksgiving.

The airlines offer major discounts because travel demand tends to die down following Thanksgiving. Most travelers have already booked their holiday airfare, but haven't started planning their winter getaways yet.

This chart form Hopper shows the number of sale fares in the weeks after Thanksgiving 2016: 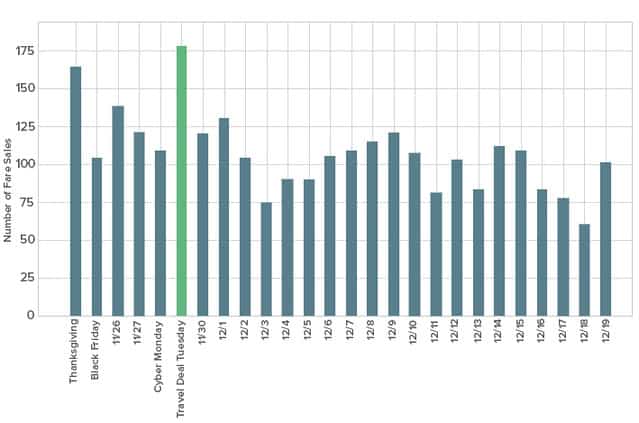 Right now, I need to book a January flight to Orlando, an April flight to Virginia (then Orlando or Nashville), and possibly a February flight to someplace sunny. Instead of putting off the process any longer, I think I'll take advantage of “Travel Deal Tuesday”. (But I'll probably use Kayak to research prices unless you guys have a better recommendation. Should I give Hopper a shot?)

I track flight prices on Google Flights. That might give you an idea of where the cheapest flights may show up as well.

I booked a flight to Australia using Hopper. It was easy to do and they sent me notification when the price hit what they consider “the lowest fare”. I setup the destination so they monitored and sent me intermittent price updates as well as expected trends. Their travel fee was $10 which isn’t bad on a $1100 flight and they easily added my flight reward number when I forgot to put it in at checkout. I haven’t taken the flight yet, but so far all seems pretty good.

If you want to find good travel deals Hipmunk is a great app.