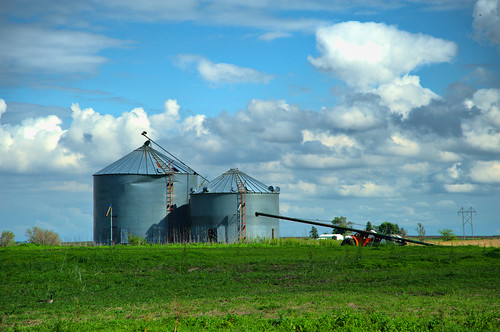 I'm a fan of unusual homes. From tiny homes to recycled homes, I'm fascinated by unconventional ways one can build houses that save on construction costs and future utility bills.

Our own house plans are for plastered walls with straw bale infill, and we're close to breaking ground. But when I picked up the latest issue of granola crunchy Mother Earth News, for a minute I considered scrapping our plans. To live in a grain bin.

You really have to click that last link and check out the photos to see how architects and builders are taking the big round structures pictured above and turning them into stunning homes. I had never heard of such a thing as a grain bin house, but I was intrigued.

You might be wondering, as any rational person would, what would possibly drive someone to turn a grain silo into a house. Turns out there are quite a few reasons grain bin inhabitants chose the structure. Consider the following features:

Another beautiful example of a high-end grain silo home is M. J. Gladstone's 450-square-foot, octagonal living room and bedroom combo with and attached angular shed that holds the kitchen, dining area, home office, bathroom, and a closet. Both Gladstone's and Stein's homes cost about $200 per square foot.

On the other end of the spectrum is an owner-built grain bin home constructed with mostly locally sourced materials. A 3,000-bushel grain bin was converted into two one-room apartments with plenty of cost-saving features, such as the following:

The owners chose a grain silo home because it could be inhabitable in about three months (before winter). In fact, the speed of assembly makes these structures ideal for emergency situations in areas hit by natural disaster. Final cost wasn't listed for this home, but it's fair to say it's at the low end of costs for a grain bin home.

Grain bins aren't just being converted into homes, either. People have made offices, workshops, playhouses, storage buildings, and guest apartments out of them. Considering expense, strength, and maintenance, they're an ideal building material. Unusual? Most definitely. But when you start to think outside the box, they make a lot of sense, too.

What do you think about unconventional homes like these? Would you ever live in one? What about building a workshop or office out of a grain bin?

The best $20 you’ll ever spend

Dress yourself for free: How to host a clothing swap

Lessons About Money from the World of Warcraft

The Get Rich Slowly investment philosophy and strategy

Yes! Sign up and get your free gift
40 Comments
Oldest
Newest Most Voted
Inline Feedbacks
View all comments