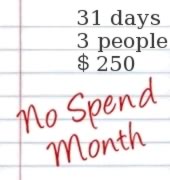 Yesterday, Amy Jo pointed me to a site called SmallNotebook.org where Rachel is nearing the end of a self-imposed No-Spend Month. Though the name is something of a misnomer — this exercise is more of a Spend Less Month — it's still an interesting concept.

For the entire month of July, Rachel's family of three set a budget of $250 to spend on food, gas, clothing, household items, and entertainment. They're doing this “to stretch ourselves to become more mindful and disciplined about the money we spend, and to save some extra money in the process.” Rachel has been posting her progress every week:

This project appeals to me because Rachel's approach is sensible. It isn't extreme. She's examined her family's habits and constructed a budget that forces them to make some sacrifices and to be creative, but which doesn't cause them to feel deprived. In one post, she explains her rationale:

The goal isn't to avoid spending any money, because that's impossible. Money is a tool, and it's main purpose is to spend it. If you didn't spend any money, there would be no use for it at all. And there's nothing grand about being miserly or cheap.

The true goal for No Spend Month is to practice making expenditures planned and purposeful, rather than impulsive and temporarily satisfying. Because it's not about the $250, or whatever the budget may be, it's about good habits and a clear perspective.

I hadn't heard of SmallNotebook before Amy Jo sent me the link yesterday. It's a lovely little blog, and a worthwhile addition to my RSS reader.

There are 45 reader responses to "Use a No-Spend Month to Become Mindful of Money".