Using an allowance to teach kids about money

This is a guest post from Nickel, who writes about personal finance at Five Cent Nickel. Since that and his four kids don't keep him busy enough, he's launched another site more narrowly focused on credit card offers.

Though small was your allowance, you saved a little store; and those who save a little shall get a plenty more. — William Makepeace Thackeray

Just over three years ago, we decided to start paying our kids an allowance. While the decision whether to implement an allowance is highly personal, I thought I'd pull together some thoughts on the subject for those of you with kids of your own.

For us, the decision whether to institute an allowance came down to one thing: a desire to teach our kids how to handle money and make good financial decisions.

Because of this, we decided to provide them with a basic allowance free and clear, as opposed to tying it to household chores. While some may disagree with our reasoning, we expect our kids to help out around the house whether or not they're getting paid for it. That's just part of being a family.

When they go above and beyond the call of duty — like the time our ten year old (he was eight or nine at the time) spent the better part of a Saturday crawling around under the house helping me improve the vapor barrier — they get paid something extra. To us, this strikes a nice balance between teaching them family responsibility and teaching them that money ultimately has to be earned.

When Should You Start?

One of the first issues you'll face is determining the right age to start an allowance. Of course, the “right” answer will vary on a case-by-case basis.

When we first started, five years old seemed perfect. Since then, however, we've come to realize that three years old is even better (for us). By that age, most kids are old enough to count, and nearly all of them are interested in buying things in a store. Since we scale our kids' allowances based on age, starting early gives our three year old a chance to get his feet wet without letting him do too much damage. 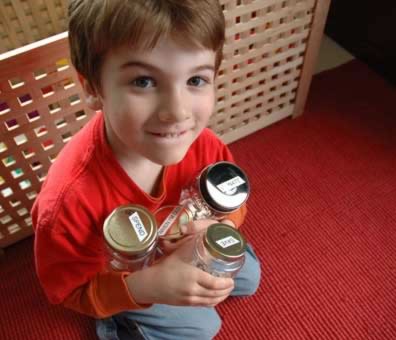 At first, we paid our kids $0.50 per week per year of age, which meant that our then seven year old received $3.50/week, and our five year old received $2.50/week. This worked well, but the weekly aspect of our allowance system was somewhat problematic.

With four kids running around the house, a full-time job, and a side business, time has a way of getting away from a person, and all too often we found that we were forgetting to pay their allowance (despite their persistent reminders) for weeks on end.

We've since moved to a monthly system wherein we pay each child $3/month per year of age. Since transitioning to monthly payments, things have really smoothed out. We typically sit down on the first weekend of the month to dole out their allowance, and the kids have also had to learn a bit more about budgeting, as they're responsible for making their money last for four weeks at a time.

In order to teach the kids not only about the value of money, but to also instill in them a sense of civic responsibility, we divide their allowance into three components:

The kids have free reign over the spending portion — they can blow it as they get it, or they can save up for something a bit bigger. Their long-term savings (destined for college, or something equally worthy) goes into an online bank account, and we let the charity contributions accrue throughout the year before letting the kids each pick a charity for their donations.

Our current bank choice for their long-term savings is ING Direct, as they offer a reasonable interest rate, and they make it painfully easy to create subaccounts. The kids love logging in on allowance day to check their balance, transfer their next allotment into their account, and see how much money they've earned.

Benefits of an Allowance

Basically, this system has worked well for us. Aside from teaching our kids how to handle money responsibly, a huge (and somewhat unexpected) benefit has been that they no longer ask or beg for things in stores. They know that it's up to them to save up for something if they want it, and they're astonishingly good at it.

So far, our oldest has saved up for things like a Nintendo DS and a digital camera — purchases that involved months of no spending, saving birthday money, etc. And at the end of the year, they even have a great time picking out their own charities.

Birth of a travel hacker

Ask the readers: Can you use positive reinforcement to train smart money habits?

The sheep and the wolves: Smart investing made simple