This is a guest post from Joseph D'Agnese who, with his wife Denise Kiernan, wrote The Money Book for Freelancers, Part-Timers, and the Self-Employed, which sets forth a personal finance system for people with not-so-regular jobs. You can follow them on Twitter: @The_Money_Book.

Hey you! Yeah, you hunched over the smart phone. How about giving the opposable thumbs a rest and joining the real world?

No, I'm not advocating renouncing your phone forever. (God knows, I'd be lost without my iPhone.) But I am suggesting that buying apps is financially illogical. With each purchase, you're training yourself to do what you should never do: buy on the fly.

In short, you're becoming a full-fledged member of Generation App. 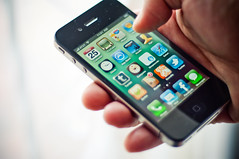 Some purchases alter your definition of prudent spending. Apps — those little bite-sized programs you can buy for your phone or computer — are a perfect example.

Look at it this way: When a smart spender considers a major purchase, he or she shops around, gets the best price, tests the product if possible, and inquires about warranties and guarantees before taking the plunge. If you were about to buy a book or a piece of software online, you'd read reviews. Shop for the best price. Maybe talk to a few people you trust who have used the software or read the book. Then you'd buy.

But people do very few of those things before buying an app. Why? Because Apple and its developers price apps so low that no one seems to care if they're getting good value for their money. If the app turns out to be crap, you delete it and move onto the next app. All you've lost is 99 cents.

I was talking about this recently with J.D. Guess what he confessed:

I'm a perfect example of Generation App. I've bought a couple dozen $0.99 or $2.99 apps because they were so cheap that it didn't matter if I ended up deleting them, which I did. And I think this is why Apple is so successful: With the iTunes store model and the App Store model, they've basically gone for micro-purchases, which cause little pain individually, but which can add up over the long haul.

And add up, they do.

But that's not my chief objection to buying-on-the-fly. I hate how it subverts financial best practices, so to speak. The person who gives himself a pat on the back for stopping to pick up a penny thinks nothing of springing for a shiny, untested app. Why is it smart to save a penny one minute, but okay to discard ninety-nine of them the next? Because mobile app pricing trains us to think: “Prudent spending is the way to go for some purchases — just not this one.”

I'd argue that once you make that concession, you're relinquishing some hard-won frugality. If $1 is trivial, what about $2, $3 or $5? That sounds like shopping momentum to me!

Resisting the urge
How do you fight back? Three ways:

So here's what you do: Make the effort to unplug. Tell yourself that you'll take the weekend off from technology. No screens. No high-tech.

Pulling the plug
When I do this — even for two days — I am a totally different person. An unplugged day always feels like a longer, richer day. I work in the garden. I hang with my wife. We spend time in the kitchen, and the simplest things seem like a profound act of discovery. (“Oh, so that's what it's like to bake a peach tart!”) If I write at all, I use paper and pencil and notice that I concentrate better.

If I don't use my car for that weekend, and force myself either to walk or bike to my neighborhood stores to shop, I buy less — and not only because I have to carry it all back home. I buy less because I crave less. I'm getting exercise, I'm loving life. I don't need to spend to get a consumer high. Nor am I in the grip of a twitchy, digital emptiness that longs to be filled by the next new app.

Hopefully, on those days, I'm retraining myself to commit to the things that matter to me, such as saving money and spending slowly and wisely. Come Monday, when I start fiddling again with the little screen, I hope to see the device in my hand for what it is: a tool for taking to people not in the immediate vicinity. And nothing more.

J.D.'s note: I'd like to point out another insidious way in which apps encourage spending. I call it in-app spending. iTunes is a perfect example. Sure, iTunes is free — but the music and movies are not. I can't recall if I paid anything for my comic-book apps (because, as Joseph noted, I've become used to this spending), but I do know that I spend a few bucks a week to download digital comics. In-app spending is an added danger. Photo by Jorge Quinteros.

There are 51 reader responses to "Welcome to Generation App".