This is a guest post from Amanda, a Colorado tech writer and an activist for children with congenital heart disease. This article is about Amanda's personal experience with insurance. It's not a prescription for other people, but insights into the value of insurance in her own life. It's her hope that it will get you thinking.

There was a time in my life when the thought of insurance made my eyes glaze over. I've never been one to want to read details in insurance contracts, license agreements, etc. I also don't always enjoy thinking through potential unpleasant situations. So, when it comes to buying and using insurance, I've learned some lessons the hard way. 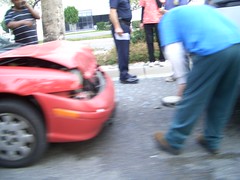 I've made some mistakes with my car insurance, for instance. When I bought a second car to drive to grad school several years ago, I thought, “No, I don't want to pay $3 extra a month for rental car coverage because we have two cars.” A few months later, I rear-ended a woman on the highway going 45mph. It took a while to get my car back, and my insurance went up a lot. But it also made it difficult for my husband Jim to get back and forth to work while I used the other car for work and school.

Insurance details can be a pain:

Recently I got a notice that wet- and dry-rot are no longer covered in my homeowners policy — do they know something I don't? I'm still trying to figure out what this means to me, but I did notice that the price didn't go down. Also, it took me five months to update the beneficiary information with the insurance company; I finally got it done right before Christmas. So, I'm not an insurance expert by any means, but I am a consumer and I have to make choices.

You've got my back — right?
In the early 1980s, my dad had his left foot crushed in a construction accident, and he nearly had it amputated. He couldn't work for two years, during which our family of six lived on workers' compensation wages of less than $1000/month. My sister was still a toddler and my dad couldn't walk, much less care for her or pick us up from school, so my mom couldn't get a job that paid enough to cover daycare.

When I was 19, working at McDonald's I spent two months on workers' comp after a pot of McHot McCoffee broke open and burned the skin right off my left foot. I was paid 75% of my wages, but did not have to pay taxes. Still, it was really hard to live on what amounted to less than minimum wage that summer.

When I was 21, my dad was diagnosed with esophageal cancer. For nine months, he lived off of his paid disability insurance through work. For his last nine months, he lived off of Social Security. There was a substantial difference in coverage. I have never been confused by an AFLAC commercial — I know exactly what that duck is quacking about. I don't buy their product, but I appreciate what they're selling.

When they offer disability insurance at work, I buy the maximum allowed. It's a few bucks out of my pay check, but I ate enough government cheese in my childhood to know the value of this coverage.

At least I've still got my health
I could write a book on health insurance. (Maybe someday I will.) When my dad fought cancer in the mid-nineties, he had over one million dollars in medical bills. At the time, all but $4,500 were covered by his insurance. From 2003-2007, my own nuclear family paid out about $58,000 for insurance deductibles, copays and prescriptions; yet our insurance company has come closer to $3 million dollars (before their contractual discounts with hospitals and doctors). There are a lot of open-heart surgeries and a couple of c-sections, and an ambulance ride and a lap-coli in that tally, but as much as I might complain about my part: 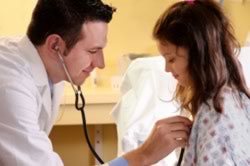 It was early in my cardiology adventures, but now I could tell her it's roughly $900-$1200, with another $200 for the cardiologist visit and $300 facility fee; so at least $1500 to tell her where her son's murmur was on the spectrum of “let's watch this” to “he needs a transplant or he'll die.”

This woman, who ran a small business with her husband, had no insurance on her eight-year-old son. She had to talk to the finance department before she could decide whether she could afford to have this ultrasound to learn the secrets in her son's heart. I don't know what happened to her after that, but from what I know about congenital heart disease, she could easily be owing the hospital and doctors over a million dollars today. If their business was remotely successful they would not have qualified for Medicaid until a year after they went completely bankrupt. Today's bankruptcy laws make it even harder for families to recover from these setbacks.

Your money or your life
Growing up, my father always emphasized the value of insurance. I knew our family's insurance agent personally — he came to our house twice a year. When my dad was ten, his own father dropped dead of a heart-attack. My grandma lost the house, and they were forced to stay with relatives until she remarried. Like his father before him, my dad died young. He was only 48 when his battle with cancer ended — clearly cancer won.

My parents never had a lot of money, but my dad always made room in the budget for life insurance. My mother, who had been a stay-at-home mom since she was 17, had no work experience or job skills, but when my dad died, she was able to pay off their modest home and create retirement accounts for herself. Eventually, she used the care-giving skills she acquired as a parent, and taking care of my dying father, to start a career caring for the elderly. If my dad hadn't obtained solid life insurance, my mother would have struggled to keep her house, and wouldn't have had the luxury to try out a few different jobs before she found the right fit for her.

Those were my early life- and disability-insurance lessons. So, when we were 21 and 22, Jim and I bought our first life insurance policies. It's no coincidence that my dad was going through chemo at the time. We started with $100,000 each. For a 21-year-old non-smoking woman, that was pretty cheap! Now I have a little over $1,000,000 and Jim has about half that (work doesn't offer as much for the spouse as the employee). We pay about $80 a month for all of that life insurance.

I've worked it out, and with my son's heart condition and the cost of our mortgage, we may be slightly over-insured for me, but not for Jim.  If he died and I took a leave of absence (or worse if I were in an accident with him and incapacitated) that money could handle our mortgage until I was able to get back to work and childcare after it, but that's all. Also, if we both died, a trust would be created for our kids that would not be eaten up by our son's medical expenses, so at least our kids could still go to college and have essentials during the rest of their childhoods.

I think I'll always carry enough life insurance to pay for my funeral and settle immediate, because insurance usually pays out faster than investment funds. I learned this when both of my grandparents died last year. The insurance check came six weeks before the investment money. They had actually pre-paid for their funerals, but they were both in their late-70s and did that as a favor to their grandchildren (my dad was their only child) so we wouldn't have to deal with those details or expenses. This I wouldn't do at age 33, but I'd start thinking about it when I get north of 70.

We finally had our wills done last year, and it feels good to take care of that too. It cost $500, but that buys a lot of peace-of-mind knowing my kids will never end up in foster care while a court takes several months in probate to settle our estate.

Pick your poison
Everyone has unique insurance needs. These are my own family's experiences. If I had two cars again, I'd buy a used one and carry liability based on it. If I were a single woman with no kids, I would probably rent or own a small condo, and have only enough life insurance to pay for my funeral and settle my estate so my mom wouldn't have to do it for me. If we didn't have dependent children, I wouldn't have as much life or health insurance coverage as I do. When we're older and have more money in retirement, we'll carry less insurance.

None of this stuff is fun to think about. But it's a simple and unavoidable fact that we all die.

You may die from a car accident, a work accident, cancer, heart attack, infectious disease, or just old age. Most of the time, you don't get to chose when or how you check out. You also don't get to choose whether or not you or your children will get seriously ill. I've known lots of healthy people who've lived well and still gotten cancer, and I know great parents whose children have died from brain tumors, leukemia, and heart disease. You can control what you eat and whether you exercise, and that will mitigate your risk, but it doesn't eliminate it.

I think the trick is to choose all of your insurance coverage options carefully based on where you are in life today, and who would be impacted if you were hurt, fell ill, or died. But do not forget to update your coverage based on your own needs and circumstances as you move forward and experience changes. Sometimes you will need more; sometimes you will need less.

I didn't share all this to scare people into wasting money on insurance, but to encourage them to think seriously and realistically about what would happen if the roof caved in, the car got wrecked, a foot got lost, you find a lump somewhere it should not be, or you just never make it home one night. The most expensive mistake we can make is believing it won't ever happen to us or someone we love.

Amanda's previous articles at Get Rich Slowly include:

Look for more from her in the future.