Most readers of this blog are from the United States, Canada, or the United Kingdom. We have an extraordinarily high standard of living compared to most of the world, and I feel there are a lot of lessons to be learned from how people live in developing countries.

I have traveled a bit, mainly in Latin America, southeast Asia, and India. In most of these regions, the middle class earns $500-$1000 per month, and this is considered quite a good income. At world standards, income of $1/day brings you above extreme poverty. $2/day puts you above poverty level. Something to think about.

Driving in India
I spent a month working in Bangalore, India, last year, and it has had a tremendous impact on how I view the way I live. At the time I had been driving my SUV eight miles each way to work, alone. In Bangalore, there is a system of buses, and the employers all operate buses to go from the main residential districts to the offices. Every day in Bangalore I took the bus to and from work, for free. In Bangalore most people take the bus to work. 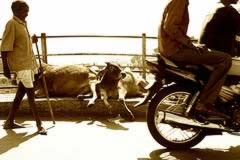 Public transportation is good, and you can also get a ride on auto-rickshaw very cheap, maybe around $1-$2 to anywhere in the city. Some people have cars, but even more people have motorbikes, a nearly forgotten mode of transport in developed countries.

A motorbike costs about 1/10th the price of a car, and costs maybe 1/5th as much to operate. Say all you want about how the cost of living is cheaper in India than in developed nations, but gasoline costs about 2x what it does in the U.S. and any imported car costs 2x as much as the US due to the 100% import tax. So how do Indians get away spending so much less on transportation than we do? When I went to Bangalore I realized immediately that my American lifestyle of driving to work in my SUV alone every day was a total waste, an enormous waste, an enormous inefficiency I cannot begin to describe.

Living in Mexico
For three years I have been dating a Mexican girl. She lives in the country's third-largest city, which is a two-and-a-half hour drive from the U.S. border. She has a Master's degree in psychology, and earns $600 a month. This is a solid middle-class living. She lives well, easily pays all of the bills, and when she comes here to visit me is able to spend more money at the luxury malls in the U.S. than I can even though I earn almost 20x more than she does. In Mexico, imported name-brand clothes from the U.S. are much more expensive than in the states, and carry much more social significance.

What's the secret? Probably the biggest is that she lives with her parents. This is a common theme throughout almost every country on the planet. In most of the world it is not normal for single people to live on their own. People will live with their extended families and save a hell of a lot of money on living expenses. Free housing? Sounds good to me. Housing is cheaper in many parts of the world than in the U.S., but not by that much; I pay $700 a month for rent here in the US, but in in most major world cities it still costs several hundred dollars. Not nearly enough of a difference to make up for the 10x-20x salary differential. Those in developing nations are just a hell of a lot smarter than we are about how they spend money.

One can also look to the “undocumented immigrants” in the US. The third-biggest component of the Mexican economy (behind oil and tourism) is money sent home from Mexicans living abroad. They do the work that we refuse to do, in many cases earning less than minimum wage, but yet live so frugally they have enough money to send home to make an enormous impact on a major world economy. While you are drowning in debt up to your ears paying off your mortgage, the guys who did the actual work to create your house have no debt and their income so far exceeds their spending they are able to save big time and send money back home. How do Mexicans spend so much less on living in our country than we do? I'd love to see statistics on this, but I bet the average Mexican immigrant spends a hell of a lot less money living in the U.S. than we do.

Coming from Laos
My best friend in college was from Laos, one of the poorest, most corrupt, and most fucked-up countries on the planet. His family were refugees who came to the U.S. during the problems that country was having in the mid-to-late 1970s. His parents speak no English, and literally have less than an eighth grade education, and never earned more than minimum wage. But between the two of them, they worked three, or four, maybe even five, full-time jobs, including positions none of us would ever do, such as forklift operator.

They easily paid off a house in the U.S., and put three kids through college and achieving the American Dream many times over what I will ever achieve. Out of all my friends, my Laotian friend is the most spoiled, and his parents always got him the latest and greatest gadgets, 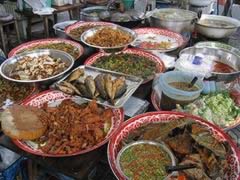 and I was shocked when he told me they sent him $100K cash as a down payment for a condo in downtown Chicago.

I've never been to Laos but I've been to other southeast Asian countries which neighbored Laos. In any of them you can have a hearty meal at a restaurant for less than $1. So why are we spending hundreds of dollars a month on grocery bills spending all sorts of dollars on our fancy organic name brand food, when we can eat well and eat more for so much less. I've priced food in many developing nations, and for basic ingredients the prices are approximately the same worldwide. How we Americans manage to spend more than a hundred dollars on food per month I will never understand — yet I do it every month!!

Happy in Colombia
My favorite country to visit in the world is Colombia. It has the most beautiful and most awesome natural beauty I have ever seen anywhere on this planet, and has the truly nicest, most generous, and most kind-hearted people in the world. When I retire I want to live in central Colombia and live on the coffee plantations, whose mountain scenery is so crazy gorgeous it cannot even begin to be expressed in words.

Colombia is a very poor country, and has been torn apart by violent civil war for the past four decades. There are more internally displaced persons here than any other country in the world, except for the Democratic Republic of Congo. Bogota is a major world city yet in the vast suburban slums just outside the capital, many people are starving to death (literally), and lack running water and functional sewage systems.

While we can afford the latest iPhone and various other luxuries, a mere four hour plane ride away from the richest country on the planet, some people cannot even afford to feed themselves. Yet the people of Colombia are happy. They place extraordinary emphasis on family and friends, and are not defined by the size of the house they live in or the gadgets they have.

The average Colombian I have met seems a lot more happy and content than the average American I have met whose life is consumed by go-go-corporate-takeover lifestyle. I don't know about you, but I spend one-third of my life sleeping, and I can vouch that it is more enjoyable when I know people care for me, than when my only concern is the latest rat-race of the week, bucking for the latest promotion. When you walk down the street anywhere in Colombia, people will smile at you, you can strike up conversation with any stranger, and they project happiness. I think the Colombians are on to something.

Spending in the U.S.
What the hell is wrong with us??

Here we are living in the most prosperous parts of the world, earning $50K-$100K per year, which is truly a fortune by world standards (literally more than the “average earthling” will earn in a lifetime), yet we are up to our ears in debt, and can barely make ends meet, and seem to be generally unhappy. We complain about fililng our car with $3/gallon gas, but the truth of the matter is that 90% of the world cannot afford to buy a gallon of gas let alone even dream of affording the car in the first place.

Meanwhile, our counterparts in developing nations are living the high life, saving money, and helping others out on 5% or 10% of our salary. Are we the most spoiled people who have ever walked the planet? Are we living unsustainably beyond normal world means? Or is our economy built on an enormous house of cards? I'm very interested to hear other's opinions about the dichotomies which exist in the world economy between the rich and the poor. I'm particularly interested in how people in rich countries have been influenced by the economics and lifestyles of developing nations.

There are 108 reader responses to "What Developing Nations Can Teach Us About Personal Finance".