This is a guest post from my friend Kris, an American writer living in India. She and her husband recently arrived in New Delhi to participate in an educational exchange program. The juxtaposition of cultures has been interesting for Kris and Jeff: every day, their hosts bring ample meals to their rooms, but just a few blocks a way, people go hungry. Kris comments, “We're from a small, rural community in the United States. Poverty is a real concern there, and we feel its impact every day. But it looks very different in this urban setting. Seeing so many street-dwellers on a daily basis is an intense experience for us.”

At the head of our road is a major intersection leading toward one of Delhi's commercial hubs. Traveling in our direction takes you to cultural centers and schools, while to the north is an international five-star hotel and to the south a number of large, colonial-style homes.

So a lot of traffic converges here, at the stoplights, in the dedicated turn lanes, and so on. Indian and international tourists also pass by on foot, coming and going between the hotel, metro, banks, restaurants, and shops. 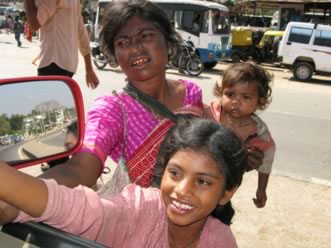 Several small troupes of children work here as well. Each has staked a claim on its own corner or stretch of wide median. The group we see most frequently includes a little girl with braided pigtails who waves, smiles, and turns cartwheels between the stopped cars or at your side as you walk along; a tiny person of ambiguous gender who spins a wingding on her cap and performs backbends and contortions with her arms; and an older girl with a drum who keeps time for them both. They carry out their short routines and then ask for a tip.

Both before and after our arrival in Delhi, many people advised us not to respond to begging in the streets: As soon as you give even one rupee, you'll be swarmed by a whole crowd. They aren't as desperate as they seem, and you're only encouraging them. If you even look at them, they won't go away. And so on.

But it is so hard to be hard. The little girl in pigtails was the first ever to approach us, and how could I not look? Her cheerful ‘Allo! and big grin of white teeth, her flipfloppy braids, and my-goodness-her-cartwheels are all irresistible. That first day, she completed her tricks and then followed along for a bit chattering in Hindi, until we crossed out of her territory. Oh, it was hard.

We've been here for six weeks. Whenever we head in her direction, I hope to see her, and I dread seeing her. You all know the words that must follow here: she's beautiful, she's innocent, she's suffering, she's sad, she's abused, she's barefoot, she's dirty, she's adorable, she's neglected, she's a little girl, she should be in school. Can I talk to her? Can I take her picture? Can I make her mine? My friend?

We're local now
Last week, coming home on foot, I heard the familiar drumming start as we entered her realm. My heart skipped. Here she comes, here she comes, my pigtail girl, my cartwheeler. Keep moving. Ignore her. I can't. Keep moving. Where is she? Don't look. Blinders on. Forward.

And then. Quiet. The drums stopped, and she turned and dashed home. With a quick glance behind I saw her sit, relax, wait.

J: That was interesting.
K: She got called back. We're not worth the effort.
J: They recognized us.
K: As ones who will not give.

I guess we're local, now. But I can't stand it. Really. I keep wondering aloud, Can I give them food? Is it okay to give food? We have too much. We're always throwing it away. A few days ago I saw someone in a car hand her a packet of McDonald's french fries and I said, See? Maybe it is okay. I don't know. Is it okay?

Temple alms
Another group of people sits on the street outside the small Shiva temple nearby. Unlike the children at the busy intersection, they do not approach passersby. There are several elder ladies in this bunch, a few men (one in an arm-cranked tricycle wagon), five or six children. They sit in a line against the temple's courtyard wall, and people coming to and from prayers give them small alms: money or food.

Our breakfast today came with half a loaf of bread. We had on hand several slices of bread from yesterday's breakfast too. And dinner rolls in the freezer from an earlier meal. And two packages of chapatis, and two guavas going soft, and a bunch of ripe bananas, and I reached my limit. Packed a grocery bag of breads and fruit and stepped out to the temple. Caught the attention of a little boy who scampered right up at my slightest nod. He took the package from my hand as though it were the most natural thing in the world.

I didn't want to gawk, so I — yes — kept moving. Took a turn around the block, and on the reverse stretch used the corner of my eye to see the women and children sitting in a circle now, eating. And the world didn't end. And I did not feel exposed.

And now I'm left wondering how temple alms differ from street tips, and whether I might speak to the little girl with pigtails and cartwheels one day.

Today is Blog Action Day. The topic this year is poverty. This is the second of three posts about the subject today at Get Rich Slowly. Photo from India Street Children

There are 30 reader responses to "When Is It Okay to Give?".