Last August, in the midst of a growing debate about taxes in the United States, I decided I'd had enough. I was sick and tired of the histrionics from both sides of the political fence, and I wanted to find the facts. I spent twelve hours researching the federal budget and the U.S. tax system, and in the end wrote two articles:

I didn't have any political agenda in mind; I just wanted to know the facts. What I discovered is that there are a hell of a lot of numbers involved with taxes, and plenty of conflicting information from a variety of sources. Based on my research, I concluded that at the federal level at least, our tax rates are low when compared to both our own past and to other countries. (You can see the 2010 federal income tax brackets at Five Cent Nickel.)

On Tuesday, USA Today shared a fun toy that basically takes all of my wordy research and converts it into a simple interactive tax-rate calculator. You put in how much you earned in any given year, and the calculator shows your effective tax rate and where your tax dollars go.

Tax rates and federal spending priorities have fluctuated quite a bit over the years. This interactive graphic makes it easy to chart both. Simply enter a salary and see how much goes to federal taxes and how that money gets spent. Then, look back in time to see how that income compares with he past when adjusted for inflation, and what the tax rates and spending priorities used to be. 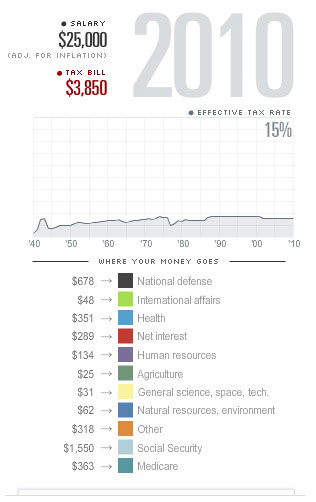 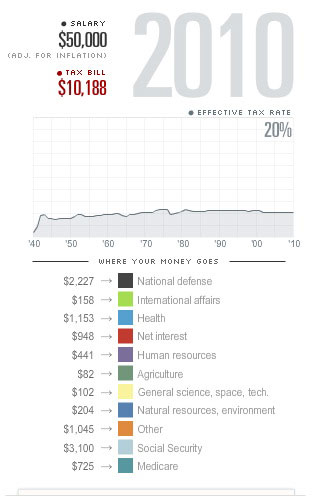 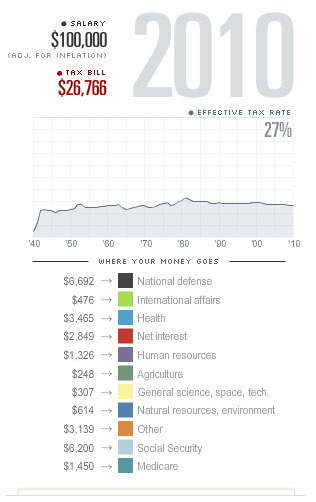 Click on any image to open a larger version in a new window.

This really is a great educational toy, and I highly recommend you spend five or ten minutes exploring it. It's probably the most fun you'll have with taxes this year!

There are 28 reader responses to "Where your money goes: An interactive tax calculator".