According to the U.S. Department of Labor, the median annual income of a U.S. worker is $32,140. Federal minimum wage is currently $5.85 an hour, or about $11,500 per year — just above the poverty line. Of the 76.5 million people paid by the hour in the United States in 2006, 2.2% make minimum wage or less. Here are some generalizations we can make about minimum wage workers: 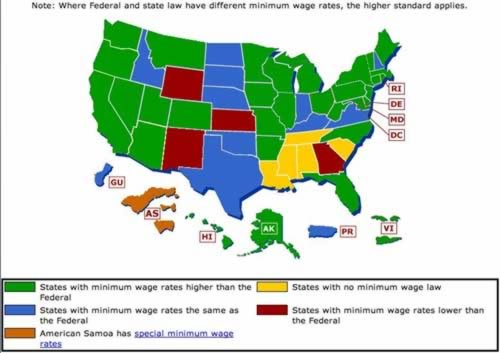 These statistics mirror my own experience. When I earned minimum wage, I was working on farms or in restaurants. I was young. The other people I knew who earned minimum wage were also young. As an adult, I've known a few people who earned at (or just above) minimum wage. These people have usually lacked a college education. In many cases, they were actually working toward some sort of degree while they worked their minimum wage job. Most people don't see a minimum wage job as an end, but as a means to an end.

That's not to say that there aren't those who aren't stuck in bad situations. Research from the U.S. Bureau of Labor Statistics indicates:

Many workers begin their post-school careers in jobs paying the minimum or something close to it, but…the vast majority of workers move on to higher paying jobs as they accumulate experience. However, there is a nontrivial fraction of workers who spend substantial portions of their early careers consistently working in minimum wage jobs. […] Less educated persons, blacks, women with young children, and workers who reside outside of urban areas are much more likely to have such minimum wage careers.

Enough numbers! Later today I'll explore ways for those trapped in minimum wage jobs to get ahead. It's not all about pinching pennies. I'd also like to hear stories from people who have worked minimum wage jobs in the past, and from those who still do. If I collect enough stories, I'll post them in a separate entry. (If you'd like to share your story, please drop me a line, or post it in this forum thread.)

Update: I've posted my piece on how to escape from minimum wage.

Oops, I may have broken my nest egg

What is market timing, and should you do it?