I've written before about how paying for quality can paradoxically sometimes be the cheapest option. In this guest entry, Handworn explains how his hobby — antique collecting — helps his finances.

After a sufficient number of items had passed through my life, after I had bought and sold and traded enough, patterns began to emerge. I saw that all expenditures of money are investments. All of them — each and every purchase, from a five-cent gumball to the ten-digit acquisition of a Fortune 500 company.

Every time you invest money, you are also spending the profits that you might have earned through better investments. But because we can't predict the future, we can't know what those better investments might be. Still, whenever we contemplate a purchase, each of us should ask: Is this a sensible investment? In most cases, it's possible to tell. In some, it's incredibly obvious.

“The business is in the buying.” — old antique-dealers' adage
Liquidity is the final test of whether a purchase (an investment) is sensible or not. How much of your money can you recoup? In some cases, you can't recoup any. Some things, like food, are entirely consumed. But when food is liquidated in the stomach, it grants the energy to work, which is what brings in money, so up to the point of luxury, food is a sensible investment.

A gym membership may be a sensible investment if used, given your improvement in energy, mood, and lifespan. But cable television or a night on the town is a consumable which is likely pure luxury. In both of these cases, the money is consumed completely.

For anything non-consumable, the principle of liquidity works even better. Can you resell a Walkman for what you paid? It depends on what you paid, of course. But you'll get more of your money back if you bought it used. Every new product is a chimera: partly non-consumable, partly consumable. (Mostly consumable, in fact.) Buying things used, free from the flash and glitz and group social acceptance that Madison Avenue has lured you with — the completely consumed increment, let's call it — establishes the true value of an item.

The value of used products is described by an inverted bell curve. The value goes down, down, down, and then, if they're not rotting in a landfill, it goes up, up, up, because they've become antiques. Which I now collect.

Why antiques cost less than you think
Antiques are the ultimate used product. They can't be packaged well, in the advertising sense. Source, supply, and condition of any particular item is never reliable. 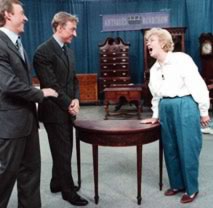 Without the areas of certainty to which Madison Avenue is addicted (and to which it has encouraged people in general to become addicted), the field of antiques is left alone, uncluttered by advertising-induced group behavior.

Imagine you're at a local estate auction, looking at a handsome turn-of-the-century Mission library table much like the new one your friend bought for $250 at Target. The real one at the auction might cost you $550. (Or, not infrequently, $150! The market is mercurial.) But this higher price is deceiving — the key is to focus on what you get.

Now imagine that, two years later, you and your friend each move into smaller houses. You do him a favor and, with yours, take his library table to the auction house to resell. Suppose his table brings $25 and that yours brings $550 again, or $450 after the fees of the auction are deducted. You've lost $100, but your friend has lost $225 because his table is only “used”. (If you paid $150 instead, you would have actually earned $300.)

This happens with antiques. It never happens with new furniture. Remember that newness, that completely consumable increment? It's a hidden cost of buying things new.

Popular culture depends on profitable conformity. Retreat from paid happiness. Have faith that the real thing will fill the vacuum. You will save money in direct proportion to how little of the completely consumed increment you buy.

Thanks, Handworn. What about high-quality furniture? If I scrimp and save to purchase a new Stickley bookcase, will it hold its value? Or am I better off buying an antique? (And how do you buy antiques? That's a topic for a future entry.)

You know i never thought about it that way. Thanks for giving me new perspective.

With two cats and two dogs, valuable furniture is not welcome in my home!

i have a college friend who’s mom is an antique dealer – not Sotheby’s auction quality things, but regular antiques. it’s a real sucker’s game. She takes that same piece of discarded furniture that you bought 5 years ago for $600, then sold in a garage sale for $25, and resells it to idiots for $500 again. Idiots who think that just because they bought it in an antique store, that its been around and has a “story”, and is better than something new. She doesn’t have to lie about the items’ pedigree, because antique buyers buy from “feel”, not… Read more »

The photo from the ARS made me laugh because I met a women who works for Sotheby’s and she told me there’s a drinking game for the show. Whenever those one of the twins touches the other, everyone takes a drink.

So what beanpants1 is saying is – it’s better to buy Used at a garage sale than at an antique dealers.

I disagree. Instead, I suggest people buy used from craigslist, freecycle, garage sales, etc. First, in reality most people don’t sell their furniture, so they are just losing the higher amount of money they sunk into expensive antiques. Second, I own some antiques, and it’s fantasy that you can easily sell them for what you paid (unless you are a dealer yourself). As you pointed out in your example, the same antique can go for $150 at an auction one day and $600 the next day. I’ve seen this happen myself hundreds of times. Plus, the prices of antiques sold… Read more »

I’ve always had a huge interest in antique wedding rings. They are beautiful. Antiques are the best collectible! Very valuable too!

I’ve never lost money on furniture, or most other items – often I’ve been gifted furniture by ex-roommates and relatives, and when time comes to move I sell them (often to neighbors) for a profit. Also – antiques – that’s such a hazy area. It’s like refusing to sell your car for $4k because you put in $4k worth of work for a car you paid $10k for ten years ago – it’s a haggle, it’s opinionated, and find a group of antique dealers who agree on the price – then find a collector willing to *PAY* that price. You’re… Read more »

Any furniture that I’ve purchased has been “slightly used” but I look at the craftmanship of the pieces and look at how well it will stand up – and style is always a factor too. I bought a set of one couch and one chair, an olive green channel back velour set from about 1954. It was in perfect condition. The set was gorgeous, and cost me $500. To buy a new couch was going to be around $800, and a matching chair was $600 at Ikea for what I wanted. This way I was able to get a really… Read more »

Beanspants, It is never, ever, “way better *financially* to buy new things in a store,” any more than it’s better to buy a new car. The second you drive it off the lot, it drops in value 30%. Overpaying is precisely what I warn against. It can happen with antiques; it always happens with new stuff. Kristina, Furniture is always sold eventually. If it’s not by the purchaser, then by the purchaser’s heirs at some point. It is not a fantasy that you can sell antiques for what you paid or more…if you were careful about what you paid. I… Read more »

I always try to go used before I go new. It’s cheaper and it’s better for the environment since it reduces waste. I recently found an online group called Free Cycle. It’s actually a collection of Yahoo groups all scattered throughout the country. The idea is simple. If you have something to get rid off you post it. Other people respond if they want it. I’ve gotten furniture, electronics, books and more from there, always free.

The trick is to buy the highest quality that you can afford… and quality has nothing to do with whether or not something is new. In general, new translates to worthless junk. The truth is, Handworn couldn’t be more right. I could resell nearly every item in my home for more than I paid for it. Case in point… I bought a handcrafted 1850s solid Cherry chest of drawers from a dealer for hundreds less than a new one at Pottery Barn (made in Vietnam of screwed-and-glued particleboard) would have cost. I could easily flip it for more than I… Read more »

This article makes some very interesting points. Antique is not the same as simply old. Antiques have a certain quality to them, such as the antiques from the Louis XVI period. These antiques were handmade by trained craftsmen, and they have been around being lovingly used for hundreds of years. The quality in craftsmanship will keep them around for hundreds of years more, as well, which is why they command a higher value than brand new furniture will bring. Even furniture made in the Modern period was often made by a designer and assembled of higher quality parts than new… Read more »