Why I love the megabus: A closer look at a seldom-used (but cheap!) way to travel

I'm in the middle of a month-long trip to the East Coast: a little work, but mostly tourism. Although the conference I attended was in New York City, I flew to Philadelphia because it'll be easier for me to get back there after I've hung out with family and friends.

That meant I needed to get myself from Philly to New York, from there down to Washington, D.C., and then back up to Philly to do my visiting. The total cost of those three trips was — wait for it — three dollars and fifty cents.

That is not a typo. I spent $1 for each of the three tickets and 50 cents to book them. 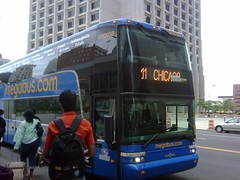 Maybe you can see why I love the Megabus, which originated in the United Kingdom and has been providing cheap bus travel in the United States since 2006. Currently the system operates as far west as Missouri, as far north as Boston and as far south as North Carolina, and also serves Ontario and Quebec.

Bus trips aren't for everyone. But they might be just the thing for people disgusted by air travel (yep, TSA, I'm talking to you), who are afraid to fly, or who can't afford either planes, trains or automobiles.

Your mileage may vary, but for me the Megabus worked incredibly well — even after my plans changed due to Hurricane Irene.

How Can It be That Cheap?

Megabus has no bus terminals to maintain, insure and staff. Instead, it picks up and drops off on city streets or at existing facilities such as 30th Street Station in Philadelphia. You buy your ticket online and present a reservation number to the driver.

Ticket prices vary based on when you buy and how many seats have already been sold. As the vehicle fills and/or the departure date approaches, fares gradually go up. The average ticket price is $20 — but again, you could pay a lot less, especially on short trips.

Bus travel has a lousy reputation in this country. I've heard dire tales about “riding the dog,” i.e., endless treks on grimy Greyhound buses with scary and/or smelly fellow travelers. In fact, Greyhound is not only working to clean up this image but has also begun to experiment with super-cheap tickets. (More on that below.)

Not everyone has time to ride the bus. If you were traveling on business you'd probably hop the shuttle from New York to D.C. Then again, you'd have to factor in the trip to the airport and at least an extra hour to make sure you get through security.

For me, saving money is usually more important than saving time. That's because the cheaper I travel, the more I can do of it. And did I mention that the Megabus has free wifi? On my flight from Seattle to Philly they wanted to charge me for Internet use.

I'd used the Megabus once before, during my trip to the United Kingdom. The bus took me from London to Cardiff, Wales and back, an experience that was both comfortable and frugal: cushy seats, smooth ride, ridiculously cheap ticket (just over $10 USD round-trip). The national railway would have been as much as $262.

Train travel is expensive on this side of the pond, too. As of last week, here's what Amtrak would have cost:

Obviously, buses move more slowly than trains. But not much slower, sometimes:

Those travel times are not guaranteed. For example, my Philly-NYC trip was about 20 minutes late because traffic backed up at the Lincoln Tunnel. (Surprise!)

But planes are notorious for being late, too. When I traveled from Los Angeles to Phoenix earlier this year, the flight was delayed so long (more than two hours) that the airline finally just booked me onto the next plane going out.

I always assume that any form of transportation won't work as expected. That way I'm never disappointed, but often pleasantly surprised.

Mega Tip: The Megabus isn't the only cheap-seat carrier out there. Other options include:

Having never used any of the above lines, I cannot vouch for them personally.

As then-Hurricane Irene labored up the coast, I realized it would be really dumb to complete the D.C. portion of my trip. Remember, at that point meteorologists were predicting Armageddon-by-the-Potomac.

So I had my father book me a ticket for the NYC-to-Philly Megabus. Even with just a few hours' advance notice, the cost was only $15.

Note: I asked Dad to buy the ticket because using my credit card over a wifi connection would have invited credit-card fraud. As soon as I arrived I repaid the $15. Later I gave him half my cheesesteak sandwich, which took care of the 50-cent booking fee — and maybe a little interest.

Though Irene packed a punch, she wasn't nearly as destructive as she could have been. But better safe than soggy. Had things gone the other way, I'd have been shut out of all the touristy things and, worse, unable to meet deadlines if the power had gone out.

Being on the Megabus cut my losses considerably. If I'd been traveling on an uber-discounted, sorry-sucker-no-refunds-not-ever-ever-ever airline ticket from Philly to D.C., I'd have been really irritated. Yeah, I could probably have gotten airline credit to use at a later date, but it no doubt would have come with restrictions.

Food fight: Does healthy food have to be more expensive?

Three Questions About Money and Ethics