Money is more about mind than it is about math — that’s one of the key tenets of this site. People make financial decisions based not on mathematical ideals, but on emotion. 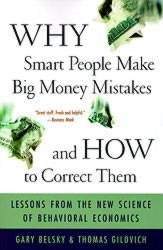 There’s actually a branch of economics called behavioral finance devoted exclusively to this phenomenon, exploring the interplay between economic theory and psychological reality.

On a recent train ride across Ireland, I read a book on behavioral economics called Why Smart People Make Big Money Mistakes (and How to Fix Them), which was published in 1999 by Gary Belsky, a former writer at Money magazine, and Thomas Gilovich, a psychology professor at Cornell University. In this short book, Belsky and Gilovich catalog a menagerie of mental mistakes that cause people to spend more than they should. What might have been a boring topic becomes fascinating thanks to an engaging style and plenty of anecdotes and examples. This book covers a couple dozen psychological barriers to wealth. I’m going to highlight just a few.

For example, do you treat “found money” — gifts from grandparents, tax refunds — differently than you do the money you earn from working? If so, you’re guilty of mental accounting, and it’s probably costing you. If you’re tempted to take money out of stocks when the overall market drops, you suffer from loss aversion, and overcoming it will allow you to earn more from your investments.

One money mistake that often affects me is the sunk cost fallacy. All that stuff I’m trying to get out of my life is nothing more than a manifestation of this: I know how much money I’ve spent for the things I own, and so am reluctant to let them go. What I have failed to realize is that it’s not what these things were worth to me in the past that’s important, but how much they’re worth to me now. If I do not value them, and they’re just taking up space, then they’re better off out of the house.

Basically, the sunk cost fallacy describes the tendency to throw good money after bad. The more we spend on something, the less we’re willing to let it go. The authors write:

If you’re debating the sale of an investment (or a home), for example, remember that your goal is to maximize your wealth and your enjoyment. The goal is not to justify your decision to buy the investment at whatever price you originally paid for it. Who cares? What counts, in terms of getting where you want to be tomorrow, is what the investment is worth today. That’s why you must evaluate all investments (and expenses) based on their current potential for future loss or gain.

Belsky and Gilovich emphasize that we’re not as smart as we think we are. We all overestimate our abilities, and this can lead us to make dumb financial decisions. Because people are overconfident, they do not prepare. The authors explain how this applies to investing:

Any individual who is not professionally occupied in the financial services industry (and even most of those who are) and who in any way attempts to actively manage an investment portfolio is probably suffering from overconfidence. […] Such people &mash again, probably you — should simply divide their money among several index mutual funds and turn off CNBC.

These are just a few of the psychological pitfalls described in the book. Each chapter covers several interrelated problems. The end of each chapter features practical tips for overcoming these mistakes. While reading the book, I began to detect recurring themes, certain pieces of advice that the authors offered again and again. Here are the main points I took away:

Why Smart People Make Big Money Mistakes is fascinating. Of course, I have a psychology degree and now run a personal finance blog — this stuff is right up my alley. It may be dry for others. Despite the fact that I love this book, and hope you’ll try it, I don’t think it’s a good purchase for most people. A single read may be eye-opening, but it’s not the sort of book that you need to keep around for reference. Borrow a copy from your public library. (My county library system has seven copies, so I’m sure it’s available in most places.)

Michael at It’s Your Money also likes the book. Google Book Search has extensive excerpts to give you a taste of the text.

Earning, spending, and saving: The building blocks of personal finance

Using an allowance to teach kids about money

Mastering the abundance mindset (and changing your money blueprint)