Why we buy: The science of shopping

Ready or not, the holidays are here and the shopping season is upon us. Although I wish I could convince you not to shop during November and December — I'm a fan of Buy Nothing Day myself — I realize I'm in the minority. It's Black Friday. It's Christmas. People are going to shop.

If you do choose to shop this time of year, be smart about it. Make no mistake: It's a war out there, my friends, and the merchants aren't on your side. They want your hard-earned money just as much as you do, and they've got all sorts of tricks to separate you from your cash. 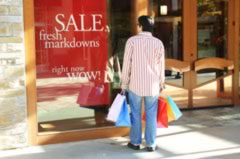 You see, merchants are smart. They spend billions of dollars every year conducting research into what makes people like you and me buy things. And so they put the sweetened cereal at your 6-year-old's eye level. They block the aisles with displays to create traffic jams in front of the things they want to sell. They'll even use scent to encourage spending!

In his 2000 book Why We Buy: The Science of Shopping, Paco Underhill — an environmental psychologist — described what he'd learn through years of research into consumer behavior and retail marketing. Some of this stuff is very subtle.

The Science of Selling

Underhill's company, Envirosell, sends trained observers into stores to follow shoppers, making detailed notes about how they interact with the products, fixtures, and employees. This information is then used to help the store make changes to encourage more spending.

For example, Envirosell's research has demonstrated repeatedly that “women especially, though it was also true of men to a lesser extent, don't like to be brushed or touched from behind.” Because of this, Underhill recommends that the space around makeup counters be large and uncluttered, allowing women to shop undisturbed. If they don't feel crowded, they're going to spend more time and more money on makeup.

The best sections of the book are those in which Underhill provides real-life examples of shoppers interacting with their retail environment: little old ladies down on their hands and knees, crawling around looking for the right bottle of aspirin; grocery-shopping fathers who buy whatever their children put in the basket; people, with carts loaded full of electronics equipment, who leave the store because the checkout line is too long.

The longer anecdotes are especially revealing:

I once heard a talk given by the vice president of merchandising from a national chain of young women's clothing stores in which she deconstructed a particular display of T-shirts. “We buy them in Sri Lanka for $3 each,” she began.

“Then we bring them over here and sew in washing instructions, which are in French and English. Notice we don't say the shirts are made in France. But you can infer that if you like. Then we merchandise the hell out of them — we fold them just right on a tasteful tabletop display, and on the wall behind it we hang a huge, gorgeous photograph of a beautiful woman in an exotic locale wearing the shirt. We shoot it so it looks like a million bucks. Then we call it an Expedition T-shirt, and we sell it for $37. And we sell a lot of them, too.”

It was the most depressing valuable lesson I've ever had.

Like it or not, you're manipulated all of the time while you're shopping, and in ways you don't even suspect. But by taking Underhill's lessons for marketers and flipping them around, you can make yourself immune to marketers' manipulations. (Well, maybe not immune, but less likely to succumb to their ploys, anyhow.)

How to Spend Less

By taking Underhill's lessons for marketers and flipping them around, we can gain some insights into how consumers can win the retail battle. Here are some easy changes you can make to spend less at the store:

All in the Family

Why We Buy notes another way your family can save money at the grocery store: have mom do the shopping.

Supermarkets are places of high impulse buying for both sexes — fully 60 to 70 percent of purchase there were unplanned, grocery industry studies have shown us. But men are especially suggestible to the entreaties of children as well as eye-catching displays.

Underhill notes that in many other ways, men and women shop differently. Most men don't enjoy shopping. “As a result, the entire shopping experience is generally geared toward the female shopper.” Specific differences read like a list of gender stereotypes:

Men may shop quickly, but because they don't often shop from lists, they're just as likely to overspend as women who spend more time in stores. In fact, the combination most likely to splurge is a father with his children.

In fact, the book is full of “man with children” anecdotes, repeatedly demonstrating that families should either not allow fathers to take their children shopping, or that men should be trained to tell their children, “No!”

Many of you have probably read Malcolm Gladwell's best-selling Blink: The Power of Thinking Without Thinking. That book, too, points out the power of marketing, emphasizing how shoppers are manipulated in lots of tiny ways. Even when we think we're immune to marketing, we're not.

Here's how Underhill sums up his own research:

Good stores perform a kind of retailing judo — they use the shopper's own momentum, her largely unspoken inclinations and desires, to get her to move in a direction unplanned, and often unaware. In the end, it's not enough that goods be within reach of the shopper — she must want to reach them. And having reached them, she must then wish to own them, or all this effort goes to naught. Amid so much science, we discover in the end it's love that makes the world of retailing go round.

So, be careful out there, folks. If you're going to shop on Black Friday — or at any other point during the holiday season — be smart about it. Go prepared. Stick to your budget. And, most of all, watch for the tricks that merchants use to lure you to buy.

Learning to love the not-so-big house

Should you travel in your 20s?

7 surprising results when you pay your kids for chores

Want to save on groceries? Cook like a peasant

Yes! Sign up and get your free gift
80 Comments
Oldest
Newest Most Voted
Inline Feedbacks
View all comments