Yardwork and Financial Setbacks: A Metaphor 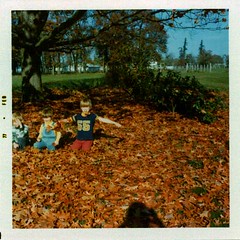 Kris and I did more yardwork today — it never ends. We wheeled out the chipper and continued to grind away at the branches and the leaves. We spread the resulting mulch at the base of our blueberries and grapes.

After about ninety minutes of work, however, disaster struck. Kris was pouring a tub of oak leaves and acorns into the hopper when the chipper ground to a halt. I crossed my fingers that there'd be a quick fix, but no such luck.

I am not a handy man. My father was good at diagnosing and fixing mechanical problems, but mostly I just get frustrated. Still, I've learned that it's worth my while to toy with things before taking something in for repair. I figured it would cost me at least $100 to repair the chipper, so it was probably worth at least an hour or two of my time.

I steeled myself for the task and dove in. After disconnecting the spark plug, I began opening the various access points, looking for possible jams. There were many. After an hour of minor frustration after minor frustration, I managed to get the chipper in working order again. Just in time to put it away for the season. (While I'd been working, Kris raked everything else by hand and carted the leaves over the garden plot in the wheelbarrow.)

That wasn't the end of my trouble, however.

Next we got out the chainsaw to cut up the larger branches. Wouldn't you know it? Whoever used it last — probably me — had put it away with an oil leak and a dislodged chain. I had to spend another twenty minutes tinkering with the chainsaw to get it operational.

I tell these two anecdotes not to encourage you to perform your own maintenance — though that's a worthy goal — but to emphasize the value of persevering when you simply want to give up. These sorts of problems make me want to curl into a fetal ball, but I force myself to deal with them.

The same is true with my finances.

An explanation
Over the past few years, as I've worked to eliminate my debt, my “money machine” has become jammed from time-to-time. In February of 2006, somebody smashed a window on my car, stealing my cell phone and a couple thousand dollars in camera equipment. We had to spend a large sum to repair some sewer pipes this summer. Our vacation to Europe, while fun, was an unexpected expense that delayed my goals.

Along the way, there have been dozens of little glitches, all of which were frustrating. But I've learned not to give up. It's natural to get a little glum when your financial plans go wrong, but I've found that if I solve the problem and move on, I actually feel much better in the long run. Here are few points to keep in mind when you run into unexpected financial trouble:

Though equipment problems tempted me to give up today, I'm glad I didn't. The leaves have only begun to fall. We still have several more hours of yardwork ahead of us in the coming weeks before we're fully prepared for winter. But when we're finished, the place will look great.

Likewise, I'm glad I didn't give up on my debt when I was faced with setbacks. It would have been easy to do so. But I know that when I'm finished, being free of my consumer debt will feel awesome.

How Ruslan Boosted His Savings by Learning to Live with Less

Loss hurts: Loss aversion and how to beat it

Yes! Sign up and get your free gift
10 Comments
Oldest
Newest Most Voted
Inline Feedbacks
View all comments

Great post J.D. I’m a person who struggles to fight off negativity when I encounter even the smallest set back when trying to accomplish something- anything big or small. A recent example: After hearing some mention of flylady.net here I decided to go try out her strategies. Her first “baby-step” is to clean and shine your kitchen sink, keep it that way and build your cleanliness from there. Well, I had a clean kitchen sink for 3 weeks (amazing feat for us!) but one night I got overwhelmed, 2 dirty dishes ended up in there and I instantly began berating… Read more »

Another point to keep in mind is “know thyself.” My wife and I love to look at nature and trees and whatever, but what we mostly like to do is read, read, read, and watch movies, and, in the case of my wife, play all sorts of video games, including very involving fantasy role-playing type stuff. So, w/ those sorts of things in mind, we own a house w/ not only a small backyard, but a backyard filled w/ only fake grass and rocks! Impressing the neighbors ain’t on our to-do list, you know?

I can certainly understand the need for a yard for the kids, but don’t envy one that requires a lot of maintenance. I would much rather spend my free time reading, although when I moved into my house 2 years ago, I planted 27 different things in my yard! I’m glad I struck when the iron was hot because you couldn’t pay me to pick up a shovel now. I got it all out of my system. Sometimes you don’t know what you’re going to get though until after you’ve signed the contract and moved in. At my last house,… Read more »

Nice post. I enjoyed it, and also believe the value of persevering is something to strive for in all aspects of our lives. It’s important in our marriages and our health, as well as our finances. I think the sweetest rewards come from accomplishing something that wasn’t easy, don’t you?

Oh man, for a second there I thought you were going to say you got your hand stuck in the chipper. But then how would you type the entry in? Yesterday I did the first of 2 or 3 leaf collections in my yard. Last year I raked it all by hand and used an electric leaf blower. This year, I got smart about it: I bought a brand new lawnmower with a bag attachment and boy did that pay off! It took me about 2.5-3.5 hours to do the entire lawn. Its not immaculate, but its good enough, especially… Read more »

As a money saving tip I would like to remind everyone to run all their gas powered tools to empty before putting them away for the winter. When gas sits for extended periods a chemical reaction takes place causing “goobers” to form. Its like clots in the blood of the machine that cause strokes, usually a few minutes after starting them after an extended period of no use.

Leaves? Falling? I guess only having two seasons is a good thing, sometimes. Here in Florida, we have summer, deadly-heat summer, summer again, then something like falling (or maybe sprall?). But I get the point of the post anyway 🙂 And I have to agree, especially with “Relax”. Sometimes I have to force relaxation onto myself to keep from going crazy. Like Gina, I have a tendency to berate myself a little too harshly. Of course, this also combines with a tendency to forgive other people of all wrong-doings, making my life very stressful sometimes as I take on more… Read more »

Likewise I know several friends who smash things that they have been working on when it just doesn’t work out. This not only gets you nowhere near closer to solving your problem, but it actually prevents you from fixing it. These sort of outbursts are beyond me.

I don’t have a yard and I don’t miss it. Give me an apartment anyday. One thing I learned is that it’s always two steps forward one step back. For my wife and I it was an unexpected death in the family just weeks before we were due to go home (and had paid for the flights). To make matters worse it happened August 1st, peak travel season for overseas travel. So we ended up paying top dollar for flights home (and economy class to boot). To say the least it took a huge bit out of our budget. Since… Read more »

Watching your trees grow as your family grows will be a BIG payoff in time.

I just have one question…what the H was your cellphone and camera equipment doing sitting in your car? How old are you?