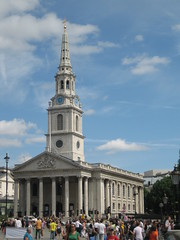 Earlier this month, I attended a candlelit baroque concert at the historic St.-Martin-in-the-Fields Church. The Festive Orchestra of London was delightful. My seat cost £8 (about $12.80) and, of course, was up in the nosebleeds. When I bought it, the ticket seller warned me that I wouldn't be able to see the musicians. Would that bother me?

For me, watching the performers is a big part of a classical concert. Yet ultimately I decided against upgrading to the next ticket level, which would have cost $19.20. I'm traveling on a budget, and saying “yes” to an extra $6.40 would mean saying “no” to something else.

Hearing but not seeing the performers didn't reduce the experience. It just changed it. Instead of watching the cellist, I gazed around the church's beautiful interior. Sometimes I closed my eyes and listened, a new and interesting way to encounter the music.

It was a wonderful evening — and a reminder that I can have some of what I want, but not all of it. Not all at once, anyway.

Opportunity cost
I've learned to adjust my expectations in the past half-dozen years. To complete my divorce, obtain a university degree, travel, and remain a freelancer have required that I live frugally and not buy in (so to speak) to the larger cultural ethos that if more equals better, then a lot more equals a lot better.

And you know what? My life is pretty great. I have the chance to write, to think, to wander. Mostly to wander.

In 2010, I spent only about three months at home. The rest of the time I was traveling to Alaska, Los Angeles, Phoenix, Philadelphia, Chicago. I spent time with frail and elderly relatives, maybe the last time we'll ever have together. I hung out with my daughter, who no longer lives in the same city. I helped my dad on his small farm, watched my great-nephew's hilariously awful Little League games, listened to a friend's dark night of the soul, talked to strangers in strange cities.

I'm writing this on a train from London to Cornwall. Once there, I'll walk along the coast with a fellow writer and enjoy Quiz Night at their local pub. I'll probably bomb, since I can never keep all those royals straight. There may even be an outbreak of Morris dancing. 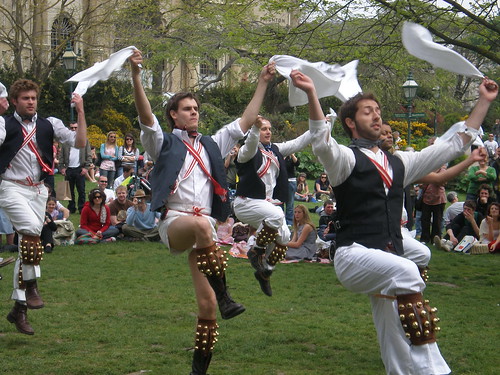 An outbreak of Morris dancing. It can strike anyone, anywhere, anytime.

This attitude applies to other financial goals, of course. Adjusting your expectations will help you pay cash for your next vehicle, save for a home, put your kids through college, or retire early. My mantra is “save where you can so you can spend where you want.” In other words, not insisting on the best of everything right now means you'll be able to get what really matters to you later on. Or even right now.

For me, that means travel. If I wanted, I could spend more: a real hotel, the best concert seats, the full-price theater tickets. No credit card debt for me, thanks. I carried a balance to pay for my divorce attorney. Never again. In addition, I'm paying for my own health insurance and retirement; I can't do that plus maintain an emergency fund if I spend too much in other areas.

Paying as I go
I'll probably spend more on this three-week trip than on all of last year's journeys combined. Just getting here cost me $835 ($611 for the ticket plus a startling $234 in fees and surcharges), and I don't have a free flop the way I do in cities where I have family or friends.

I can stay this long only because I live and spend cautiously while I'm at home — and also because I'm willing to reduce my expectations. I could have afforded one week, maybe, in a cheap London hotel, a concept as oxymoronic as “cheap Manhattan hotel.”

Instead, I'm doing three weeks in hostels in Cardiff and London as well as using other frugal hacks: wifi access at the library vs. paying about $8 a day at the hostel, free walking tours, travel on the Megabus, meals from hole-in-the-wall cafes or (more often) from supermarkets. These economies are letting me spend more on concerts, theater tickets, and side trips to places like Cornwall and Windsor. 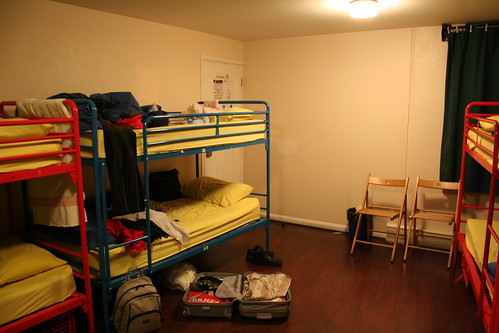 A typical room in a London hostel.

Rather than save for a whole year to make one big blowout of a trip, I'll live the frugal life and pay as I go, when I want to go. Making a sandwich in the room and hopping on the Megabus to Cardiff for about $10 round-trip sure beats overspending and then fretting about the credit-card bills that will follow me home.

Besides, overspending now would mean less travel during the rest of the year. I don't want to make that trade-off. I've already lined up a house-sitting job in Anchorage, hope to attend a couple of writing conferences in San Diego and New York, and want to visit my father and other relatives in New Jersey.

The trade-offs I will make: music without a sight line, crackers and cheese for lunch, a hostel bed without a private bath. Some of what I want — but now, when I want it, and without the stress of debt.

Reminder: Donna is talking about conscious spending. The fifteenth tenet of the Get Rich Slowly philosophy is you can have anything you want — but you can't have everything you want. It's important to choose the things that are most important to you to spend on; pinch pennies on everything else.

There are 63 reader responses to "You Can Have It All (Just Not All At Once)".