You, Inc.: How to be the CFO of your own life

In the very early days of 2002, I realized I needed to change a few things about my life.

My girlfriend and I returned from a vacation in Phoenix, Sedona, and the Grand Canyon in the middle of December 2001, having had an excellent time despite some nervousness about flying so soon after 9/11. Upon returning, four things happened to me that forced me to change my outlook. I suppose the older, more rational me can look back and say on some level I caused them to happen.

I moved in with my father so I could take some time to look for a new job and to contemplate my existence for just a couple of months. It was during this time I realized that I was losing money every month while working at that non-profit. It cost me more to travel to the job and pay rent and other necessary expenses than I was earning. I decided to start focusing on my financial situation (among other things).

I bought Microsoft Money and started plugging in numbers, accessing my accounts online, and paying off debt. “Interesting,” I thought. I liked how the numbers on the computer looked as if they were some sort of official financial statement. 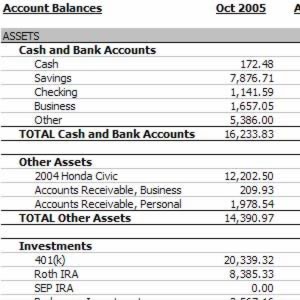 I got a job in Newark — accessible via train from my dad's house — since I could not afford to drive for a while. (It would also have been illegal.) I worked as a temp for the Chief Operating Officer of a very large company. They liked me, so they kept me after the temp assignment ended. Now I began to see something really interesting in the Microsoft Money: the numbers were going up each month! Neat!

I moved twice during the next twelve months: once to a cheap apartment in Jersey City which kept my expenses down, and then to an apartment I shared with three roommates in central Jersey. Rent was less than $350! Cable was split among four people! Now that I was tracking every penny earned and spent, I saw the value of saving money where possible, spending less than I earned, and maximizing my income. (I'm still working on that last one.)

Rather than just letting things happen to me, I was making decisions about my money management. I was investing in a 401(k) with company match. I opened a high-yield savings account at ING Direct. And I was making other good decisions. At this point, I became the Chief Financial Officer of my life.

Then I put two and two together.

I had been blogging since 2000 — since earlier, actually, but it wasn't called “blogging” yet — and I thought that creating a blog about my finances would be a cool way to keep myself accountable. I doubted at the time that anyone would actually want to read my financial updates, how I spent money, and whatever money-related issues I was pondering.

In my first post, in July 2003, I presented my financial update, a status of my current net worth divided into a few categories. I was inspired by the automatic monthly reports generated by Microsoft Money. Since that first post, my monthly updates have grown into financial statements, not unlike the financial statements in the annual reports published by corporations. I've been posting them on Consumerism Commentary ever since.

Thinking about my finances and treating them in terms of a business makes sense. Putting together these reports each month like a business is the most important part of being the CFO of my life. As I export the numbers from Quicken (no longer Microsoft Money) into Excel to prepare the website post, I am forced to think about how much I spent, and where I could have saved more money without compromising the things that are important to me. Now that I have income from several sources, I also review those numbers to determine how I can expand my business opportunities. Preparing the reports makes me consider my progress and publishing the reports keeps me accountable.

I am thankful for the regular readers my blog has attracted over the past few years; their comments have been invaluable in shaping my thought process and my decision making. Each month, I do not want to let them down. Part of my motivation for always trying to make appropriate financial decisions is the knowledge that I have to report my progress to the public every month. It's no wonder that so many companies would rather stay privately owned than open their finances to scrutiny by going public. It's a tough crowd, especially when you make a sour financial move. Although the mistakes show up less often these days, I am positive I have more mis-steps to make before my life is through.

No matter how poor my decisions are, the results will be posted every month, for the world to see. I now prepare two statements each month.

If you're interested in developing your own statements, I've created two Excel templates, located here and here.

Thanks to Flexo for sharing his story. If YOU have some personal finance information you'd like to share with the readers of Get Rich Slowly, let me know.

Being a landlord: Is it worth it?

In praise of the adult allowance

What to buy on Black Friday

How to avoid bank overdraft fees

Yes! Sign up and get your free gift
8 Comments
Oldest
Newest Most Voted
Inline Feedbacks
View all comments