I must confess to a new habit: I collect discarded ATM receipts. It all started when I walked by the bank in the building next to Motley Fool Intergalactic Headquarters, and found one such receipt blowing in the wind. I was shocked by how little the person had in her/his bank account, and how much she/he paid to get what cash was available.

To see what I mean, check out the stats on seven receipts I've recently picked up: 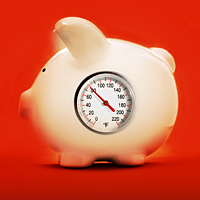 Here's another theory I have: We each have an internal level of financial stasis that involves having a certain amount of money in the bank, a certain level of debt, and a certain amount of each paycheck going to savings — an internal “ther-money-stat,” if you will. If we somehow find ourselves in a better situation than our regular level of financial comfortability, we turn up the spending. Perhaps it's due to a raise, or a bonus, or an unexpectedly large tax refund. But as historian C. Northcote Parkinson wrote, “Expenses rise to meet income.”

On the flip side, there's a level at which we freak out. Our financial condition drops below our internal ther-money-stat, and we swear off restaurants, movies, vacations, and anything but the necessities. (By the way, a difference in these internal levels is one of the biggest sources of conflict between couples.)

If I had just a few hundred dollars (or less) in the bank — as is the case for plenty of people, according to the ATM receipts I pick up — I would immediately cancel the cable and the cell phone, turn down the heat and layer up the sweaters, and likely get a second or third job. I would barely be able to sleep with that little in the bank.

Of course, I don't know the stories behind these receipts, but my guess is that these folks have a much lower ther-money-stat than I do. The question is, can it be changed? Can someone who is willing to pay $3 to withdraw $20 from a $71.04 bank account turn into someone who would not rest until there's three to six months' worth of living expenses in an emergency fund?

I think it's possible; you GRS readers have told us before what got you to become fiscally fit. But I bet it's not easy.

I suspect that many of us (myself included) tend to get a bit self-righteous when we see evidence of people making bad financial decisions. However, I can't help — especially at this time of year — to also feel sorry for these low-balance bank customers. There are plenty of people who are experiencing tough times due to no fault of their own. I can even conjure images of parents withdrawing from their measly accounts to buy gifts for their kids. (I'm a sucker for a holiday sob story.)

So whatever the reason for these folks' modest bank accounts, here's to hoping that they — and you — have an enjoyable holiday season, and that 2010 brings bigger bank balances to us all.

The budget toolbox: 13 tools for building a better budget

How I paid less in property taxes