About Get Rich Slowly

Get Rich Slowly is a site for anyone who craves greater financial freedom.

Are you deep in debt?

I’ll share tips for digging out of debt and building a better financial future.

Do you want to buy a house and/or send your kids to college?

I’ll help you do that too.

Have you been wondering how to get started with stock-market investing?

I’ll teach you how to do so without gambling or excessive risk.

Are you one of those crazies with eyes on early retirement?

I totally get it. Because I managed to retire early myself, I’m happy to show you how you can do the same.

You won’t find any “get rich quick” schemes here. You won’t find multi-level marketing fads or hot stock tips here. I’m not going to give you a hard sell on any products or books. What you will find at Get Rich Slowly is daily information about personal finance and related topics.

I’ll share stories about debt elimination, saving money, and practical investing. I’ll post occasional reviews of books, magazines, and software. I’ll scour the web for the latest personal finance tools and articles. I’ll also post news on related topics like simplicity, frugality, and personal development. (I believe that personal growth is systemic, that in order to improve financially, you have to improve in other areas of your life.)

I was born and raised in Canby, Oregon. As was my father before me. As was his father before him. I attended Canby Union High School before spending four years at college in Salem, where I attended Willamette University. I earned a bachelor of arts in psychology with a minor in English (writing emphasis). I also took a lot of public speaking classes. Naturally, after I graduated I couldn’t find a job. I went to work for my Dad, selling custom boxes for the family business. I hated it.

You’ll notice that none of this has anything to do with money. I have no formal training in the world of finance. I’m not an accountant. I’m not a licensed stockbroker. I’m not a certified financial planner. I’m just a regular guy who has learned about money through the school of hard knocks.

You see, I graduated from college with a debt problem. I didn’t have student loans — thank goodness! — but I’d discovered the “joys” of credit cards. Over the next fifteen years, I got further and further into debt. By 2004, I’d acquired over $35,000 in consumer debt — credit cards, personal loans, a car payment — and was living paycheck t paycheck on a salary of $50,000 per year! I spent every penny I earned and had no savings.

One night in October 2004, after I’d bounced yet another check and missed yet another payment, I reached rock bottom. That night, I drafted a three-year plan to get out of debt. According to my calculations, I could pay off everything I owed by December 2007 — if I managed my money wisely. I decided to give it a shot.

Here’s a screencap of the actual debt-reduction plan I drew up that night: 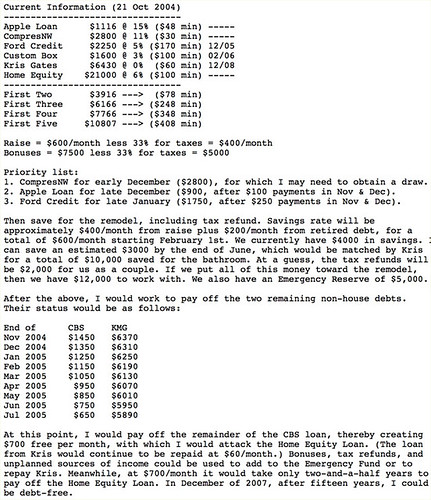 After I drafted this plan, I decided to manage my personal finances as if I were managing a small business. I cut back on spending. I boosted my income. As my cash flow improved, I paid down debt. I tracked my spending and created monthly reports to document my progress.

The results were remarkable.

In less than a year, I had set aside a $5000 emergency fund and had increased my cash flow by $750 per month. I plowed that “profit” into debt-reduction. I continued to manage my life as a business, and in December 2007 — right on schedule! — I became debt-free for the first time in my adult life.

Today, a decade later, I’m still learning about smart money management. Because I’m human, I occasionally make mistakes — occasionally I make dumb mistakes — and some years are more profitable than others. In general, however, my net worth continues to grow and I’m able to pursue the things that make me happy.

Become a money boss
As featured in: