Behavior Gap: The psychology of investing

At Behavior Gap, Carl Richards is on a mission to help investors overcome the self-destructive behaviors that prevent them from prospering. Over the past week, while preparing for an upcoming presentation to a conference of financial planners, I've had the chance to e-mail and speak with Carl about his site and his goals. “Any way we can encourage people to think about money is good,” he told me. He wants people to become aware of how their behavior affects their financial position.

The classic example — and the source of his blog's name — is the “behavior gap”. “In general, we're bad investors,” says Carl. “We tend to buy high, sell low. This behavior creates a gap between investment returns and investor returns.” 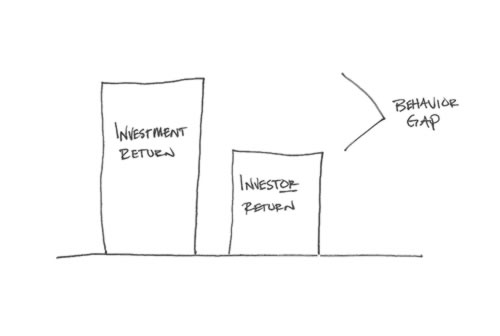 Carl believes that investment success isn't about skill, but about behavior. To the extent that you can control your emotional and psychological involvement with the process, you'll outperform your peers. That's not to say that you should be a cold mechanical machine with money. But that you should be aware of when you're making decisions based on irrational exuberance (or irrational fear) instead of financial best practices.

In addition to insightful articles and the occasional slideshow, Behavior Gap offers a nascent collection of sketches about behavioral finance. More impressive, the site boasts several “white papers”, short PDF ebooks on important topics such as:

It's rare that I find a site that completely enthralls me. Behavior Gap is one of them. After sharing ideas with Carl, I'm confident I'll be linking to his blog often in the future.

Where to find affordable furniture

The billionaire next door: The wisdom of Warren Buffett

The Perfect is the Enemy of the Good (Walking example)

It has been a well known issue among day-traders for years that emotions can make a person behave in ways that causes us to lose money.
It’s a lot more difficult to see this effect when you are investing because the timescale is just so much larger.
I’m glad that someone is making it their mission to teach people about this!

This reminds me of an article at a friends site… supposedly, there is a correlation between soccer match results and international market changes. 😛

I’m looking forward to checking these resources out! I’ve been struggling for a while with the gap between my “theoretical” desire to start investing in my financial future and the daily actions that I need to take. (which is one of the reasons I read this blog…)

This has some great resources. Thank you 🙂

I’m not at the point in my “baby steps” to start my investing, but this is definitely the stuff I need to know before I even wade into the water. As always JD, thanks for the information you send us.

Morningstar offers a great tool called “investor return.” They calculate what return the average investor achieved from a certain fund based on cash flows in and out. For instance, look at Ken Heebner’s CGM Focus Fund. As you can see here http://tinyurl.com/dmdpjo, the fund annualized 16.33% over the last 10 years. However, the average investor in the fund annualized -23.39% over the same period! (Yes, that is a negative number.) Plain and simple, investors bought the fund after seeing good returns or reading about the fund in the press (bought high) and sold the fund after becoming disappointed over a… Read more »

One of the reasons we are taking so long to debut your investing section at Thrive is precisely because I’m working hard to make sure that we correct for these irrationalities as much as possible. As a behavioral psychologist, helping us with the way we think about money is a big part of my job at Thrive, so certainly I enjoy both this blog and the source…there are is a ton for people to do, and while you’re waiting for us to finish building that into Thrive, blogs are a great place to learn.

I know that some of the fans of Carl’s blog are financial planners and portfolio managers as well as individual investors.

Interesting concept. Thanks for the info.

I’ll take in consideration Behavior Gap for future analyze. Considering that you have mentioned about it in this post means that deserves all the attention.

Investors don’t always have a plan and stick to it that they miss market opportunities and create the “behavior gap”. They react, instead of acting. They should take some tips from Warren Buffet– buy and hold and when everyone is selling– buy more. If they did that, they would be in the market when the big days, weeks, and months come and they would enjoy the returns they miss as evidenced in the behavior gap.

Ever since we bought an investment property in 2005 (yeah we got wrapped up in the real estate investment returns here in So. Fla.) I have been paying more attention to emotion and its impact on our investment choices. I’m following a modified version of Buffet’s: “be greedy when people are scared [right now, we are buying stock with any and all extra money] and be scared when people are greedy.” I still think investing in real estate will help us meet our aggressive goals but we bought at the wrong time and it will be some years before we… Read more »

if you’re familiar with ben graham, then you’ve probably heard of his mr. market analogy. this article reminds me of that.

Thanks for the link! As a consultant for a large discount brokerage company which for obvious reasons will remain nameless I deal with this issue every SINGLE day. Every day I talk to clients on the phone and try to have them realize the truth of this principle. According to the research that my company has done, despite the average return of the overall stock market being much higher, the average return for the stock market fund investor is just 3%. It drives me crazy when I explain what’s going on and that if the client wants to go to… Read more »

Van Tharp puts it this way: trading is a 3-legged stool, with knowing yourself (psychology), money management (needs psychology), and a system that works for you (so you need to know yourself: psychology). Yes, it really is mind, mind, and mind that makes you money in the markets. No, really. As they say in driving safety, the most risky part of a car is the nut behind the wheel… That said, you have to take the time and figure out how you want to invest. This isn’t a blanket ‘you should always buy ‘n’ hold’ statement either. First of all,… Read more »

Without data or examples for the Wealth Management Paradox – Part 1, I’m still skeptical about what the author is really saying. Same applies to “Media Fast”. Anecdotally it sounds good, but I’m not sure it’s actually true. Paying attention to the right information/news may actually help performance and ignoring it may decrease performance.

As for Wealth Management Paradox – Part 2, my retirement mutual fund provider calculates my personal rate of return (time-weighted). Yes, it is something any financial services provider should do for you automatically.

@Squished18: being skeptical until you see data is a good approach when you are dealing with investment concepts. The Paradox 1 is meant to present a concept, that risk actually go up over time if you are focused on $ and not %. It is backed up by data which I will add in a future post. In terms of paradox 2, that is the point time weighted returns remove the impact of cash flows, but in real life we have cash flow in and out of our investments, often the timing of cash flows can result in a dramatically… Read more »

If you have not read “predictably irrational” you should check it out. There are some interesting correlations.

This article by Gary North is somewhat related to the mentioned concept of the “great reset”. It’s economics more than personal finance, but it’s at least easy to understand economics:

Excellent blog – get rich slowly is certainly a maxim that I try to follow ! As does my hero Warren Buffett although it only took him around 15 years to become a millionaire, although I guess he didn’t count that as ‘rich’ – it took him a bit longer to make his first billion. The best holding period for an investment is ‘forever’ !