“Simplify, simplify!” — In the footsteps of Thoreau 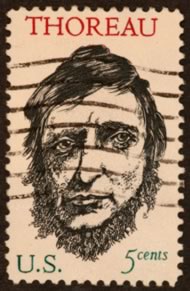 In my twentieth year I packed a large cardboard box with belongings and headed east by train to begin my artistic life in Massachusetts, 3,000 miles from California, where I'd been born and raised. I wanted to live near Walden Pond and commune daily, in nearby Concord, with the wise ghosts of Thoreau and Emerson. The closest I could get was the city of Lowell, birthplace of the American industrial revolution—a ramshackle town cluttered with eerie decommissioned factories and mills. But from Lowell I could get to Concord by train as often as I liked.

I set up my new life in a 300 square-foot studio apartment fourteen miles from Walden Pond as the crow flies. My sole furnishings were an inflatable mattress, a plastic patio chair, a small lamp, a pile of books, and a radio/cassette player. In the cardboard box, I had packed the essential kitchen wares: a can opener, a spatula, two plates, two cups, two forks, two knives, two spoons, and a frying pan. More importantly, I had packed a word processor and a ream of paper.

I was determined to begin my writerly life in the spirit of Thoreau's proclamation in Walden: “Give me that poverty that knows true wealth.”

Thoreau, living for two years in his tiny cabin on the shores of Walden Pond in the mid-19th century, had proven conclusively to the industrialized world that simplicity and “mean living” were the highest spiritual ideals, for they refined one's sense of beauty and truth. “Simplify, simplify,” said Thoreau, and I wanted to heed his advice. The fewer my possessions and the smaller my quarters, the loftier my hopes could be—and the freer I could remain to realize them.

My rent in Lowell was $400 dollars a month. With roughly $1,500 in bank savings, I could conceivably live and write—and do nothing else—for about three months. I set to work. I spent nearly every day clicking away on my word processor, and every evening reading. Intellectually, I'd never been wealthier. It was an education unlike anything provided by my years of schooling.

Practically everything in my life had been cleared away for the sake of writing. And only years later would the true nature of this apprenticeship period become clear to me: more than learning how to be a “starving artist,” I was learning how to be grateful for what little I possessed.

The residence in Massachusetts proved successful. I returned home that autumn unafraid of poverty, able to work for five to six hours at a stretch, and in possession of a 150-page personal manifesto. I'd become a writer.

Maybe it's needless to say that my “manifesto” never saw the light of day. At the sentence-level it was truly awful, but however far I remained from producing publishable work, I'd committed myself to my craft, and knew that if I nurtured this commitment my words would find their way, sooner or later, into print. Four years later that's what happened, when my first short story was published in a national literary magazine.

Since that idealistic Massachusetts adventure, I've never lost my grasp on the importance of simplicity (though living simply remains a day-to-day challenge). Simplicity frees one to make any range of choices and pursue any range of possibilities. And such freedom is hindered by complexities like financial demands, time constraints, and the baggage of material belongings. By consciously seeking simplicity in life, one places oneself in a condition of gratitude. And gratitude, by instilling an awareness of one's blessings, clarifies one's vision and helps one establish goals.

Chapter 5 of The Prosperous Peasant further explores gratitude, and can be read online for free. Cunningham's latest fiction project is Lost Son, a novelization of the life of the poet Rainer Maria Rilke. This article originally appeared at Soul Shelter in a slightly different format.

Mark Cunningham is one of the co-authors of The Prosperous Peasant. Cunningham is a member of the Woodstock Writers Guild, the monthly writing group to which I belong.

View all posts by Mark Cunningham

A Brief Overview of the Alternative Minimum Tax

The four seasons: A new way to look at the U.S. economy

Uncommon lifestyles and the truth about the 4-Hour Workweek: An interview with Tim Ferriss

Yes! Sign up and get your free gift
17 Comments
Oldest
Newest Most Voted
Inline Feedbacks
View all comments

Its interesting how many of us that read Thoreau revere him. I also made a trek to Walden pond about 13 years ago while in the area on business. I was eager to walk through the same woods as Thoreau, but was stunned to find the city dump across the road and diseased trout in the pond! Evidently, those from afar revere him more than those that are near.

Visioning is a good thing, clarifying one’s goals – not so good.The “goals” ultimately become a burden or worse baggage. But the vision thing, pure vision, insight,illumination,awareness,that’s the pure gold,and the most difficult to attain.Sorry to be hyper, but I am trying to simplify.

I think it’s important to separate the concept of “simplicity” from the idea of “doing without.” I don’t think you have to withdraw from modern society or shun material possessions in order to live simply; for me it’s largely a matter of limiting my outside commitments (i.e., learning to say no); automating to the extent possible the paying of bills, mortgage, and other financial management; and thinking carefully about the time commitment involved in anything I purchase or any project I undertake. I’m in the middle of reading Jay Rubin’s excellent book on the work of Haruki Murakami, “Haruki Murakami… Read more »

I think that living simply, if it means only doing and having the things that you love, is great.

On the other hand, getting rid of stuff for it’s own sake, and making life difficult in the process, is probably less good.

I, too, have felt the lure of Thoreau. (Kris hates him.) I recognize that much of his philosophy borders on the hypocritical (“Look how little I can live with! Hey, neighbor, can I borrow all your tools?”), but I love the ideas behind what he writes. Plus, Walden is packed with instructive aphorisms. I think simplicity is a noble aim, but difficult to reach. As others have noted, there’s a difference between simplicity and “doing without”. I think Leo at Zen Habits does a great job of showing what modern simplicity can look like. He’s all about the power of… Read more »

@kristin: I lived on Thoreau Street in Concord for five years in the 1980s, and it’s true, most people in Concord didn’t see much mystique in Walden Pond. It was mainly viewed as a good place to go swimming (I myself used to go skinny-dipping there several nights a week in summer). But Walden wasn’t pristine even in Thoreau’s day. I remember once when I was swimming there and the train roared by; one of the other swimmers stoppd to watch the train and said, “Thoreau must be turning over in his grave to know that they put the train… Read more »

That being said, some people (myself included) need a little crutch: live with what you think is beautiful, then re-enter the life you want.

My husband and I were greatly influenced by Thoreau’s message some 15 years ago when we sold out too-big house & most of the stuff in it, moved to a place we love, and got jobs that leave us richer emotionally (if not financially). We strive daily to have less but live more – not easy to do in our consumer-driven culture.

I want very MUCH to go away for awhile and live in the woods and am not sure how the logistics would work. Perhaps a post about that?

Great article! I couldn’t agree more about simplicity and its importance in people’s life. Especially in a world like it is now, in which so much more importance is given to vain things. Like some author said, if we want to learn something new, we have to read older books.

Wow, that’s beautifully written. I have read Thoreau when younger but didn’t fully grasped its full concepts. Really awesome that you were able to apply what your learned on your journey into your craft.

Not to denigrate Thoreau or Walden Pond, but even he did not live up to the ideals that he was writing about. His doting mother came over with home cooked meals regularily, he often stayed overnight with the Emersons when the loneliness overcame him and he spent many an evening in town at the pub drinking and socializing until late into the night. You won’t read a word of this in his book though since it doesn’t exactly mesh with what he was saying about charity and solitary living. It reminds me of something my mother once said to my… Read more »

I am from Concord and boy do I miss it, what a great place – except for winter. Glad you learned so much while staying near there and visiting Walden Pond!

I appreciate the general idea behind simplicity. I went through a period of financial hardship that really made me appreciate the simple things and focus on what aspects of my life were truly fulfilling. I’ve been more focussed and satisfied with life since, but I wouldn’t want to go back that forced hardship again.

Julie: I don’t know where you got your information but it’s quite incorrect. First, Thoreau did not drink alcohol, much less hang out in pubs socializing…he was more of a solitary personality. On alcohol, Thoreau wrote: “I would fain keep sober always… I believe that water is the only drink for a wise man; wine is not so noble a liquor… Of all ebriosity, who does not prefer to be intoxicated by the air he breathes?” In fact, Thoreau led a very disciplined lifestyle…he didn’t smoke, never married, and didn’t even drink coffee. He was mostly a vegetarian as well.… Read more »

As featured in:
3shares
wpDiscuz