If the national media is any indication, more people are embracing the notion of buying used clothing from thrift stores and consignment shops. Last week, USA Today ran a story describing how secondhand stores are reaping the benefits of recession:

As Americans look for ways to cut spending, they are scooping up bargain clothes, accessories, toys and furniture once owned by someone else.

"We're sorry about the economic situation, ... but it is a good time for our industry," says Adele Meyer, executive director of the National Association of Resale & Thrift Shops. Three-fourths of resale stores said they had higher sales in September and October, compared with the same period last year, according to the trade group. The average sales increase was about 35%.

This is a guest post from Amanda, a Colorado tech writer and an activist for children with congenital heart disease. 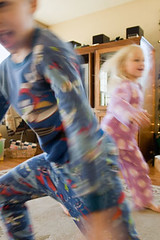 My conversion to frugality began about a year ago, but it's only been recently that I've become good at it. We've been saving money by being aggressive with a cash-only purchase plan. If we can't afford it, we don't buy it. This only works if you know ahead of time what you need and how much you're willing to spend on it.

One of my recent accomplishments was purchasing fall clothing for my children. I knew that they needed new clothes, and that the cost would exceed our discretionary spending. In our budget, we set aside savings for clothing. I had a budget of $125 for each of my two kids. Though they didn't need new clothes in August, I knew that was when I'd be able to find good sales and the best selection, so I planned ahead.

On a street corner near our house is a store called The Dig, which advertises "most clothes $3 - $4 - $5". Many of these are items of the latest fashions, which have been rejected for whatever reason. Clean and organized, the store also has dressing rooms, something many thrift stores lack. I used to mock Kris for going to The Dig. It looked like a dive. Then I joined her for a trip a couple of weeks ago — now I'm a convert.

I buy most of my clothing at one of two places: Costco or the local thrift shops. It makes me wince to pay more than $20 for a piece of clothing. (Unless it's something top quality, like a Filson jacket, in which case I'll gladly pay $150.) Costco has styles I like, but the selection is limited, and the prices are three times those at thrift stores. Thrift stores have a huge selection, but the garments are often flawed. And to find anything good, you have to sort through tons of junk.

Used clothing stores like The Dig are a compromise. The prices are better than at Costco. The selection isn't as wide as you might find at a thrift store, but the quality is generally better. Here are some tips about shopping for second-hand clothes. (Kris gave a lot of help with these.) Continue reading...

Trunk Clothes: A Sure Sign You Have a Spending Problem

I mentioned my little brother earlier because he was taught his son that two pairs of shoes equals one iPod. (Remember that they're moving, and his wife is packing sixty pairs of shoes.) He just called to chat. I told him I was busy, but he offered me another story and gave me permission to print it.

His wife used to work at Nordstrom. While there she took advantage of the employee discount. A lot. In fact, she spent over $10,000 on clothes during that period. (Meaning $20,000 retail price, I think.)

Even when the family didn't have any money, she'd come home with clothes. My brother would call her on it, but she'd deny that they clothes were new. "Come on," he'd say. "I know what's in your closet." One day he complained to her about the new clothes she was wearing, and she claimed they were old, when he pointed out that there was a price tag still dangling from whatever it was she was wearing.