Do people at different levels of wealth spend their money on different things? Of course they do.

Some of these differences are by necessity, of course. If you have a million dollars in net worth, for example, then even average spending on your weekly meals will make up a much smaller portion of your net worth than the same spending would for somebody who has a net worth of $10,000.

To illustrate how people at different levels of wealth allocate their money differently, the folks at Visual Capitalist have collated data from the Federal Reserve's 2016 Survey of Consumer Finances to create this chart. (Click image to open full-size version in new window. Or visit Visual Capitalist for more info.) 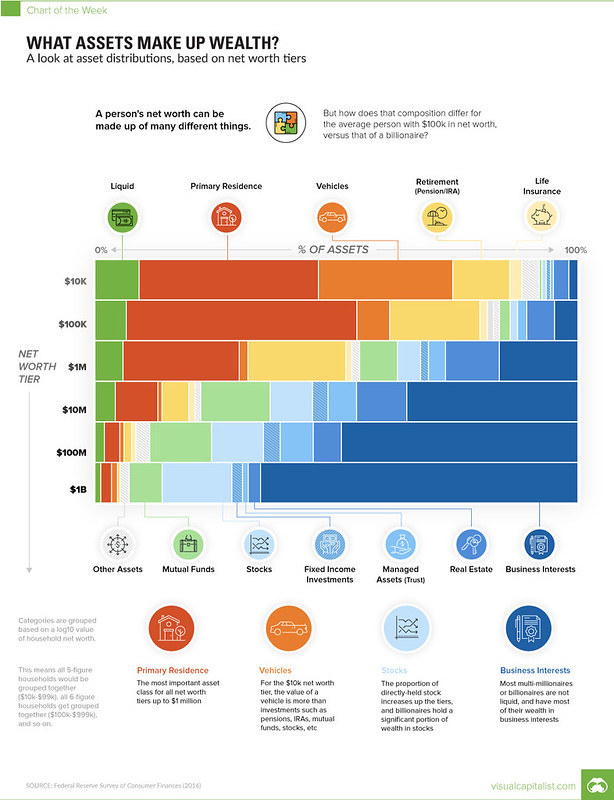 The chart divides Americans into six groups based on net worth. For each group, it shows how much of this wealth is in various assets, such as cash, housing, and cars.

Most of the info here is unsurprising. At lower levels of wealth, certain assets make up a disproportionate amount of a person's net worth. Basic housing, for instance, is by far the most important asset for folks with less than $1,000,000 in net worth.

There are, however, a couple of things that stood out.

Inspired by this, I tried to create my own bar graph in Microsoft Excel. I failed. I did, however, make a “doughnut chart” using the same color scheme as the Visual Capitalist chart. 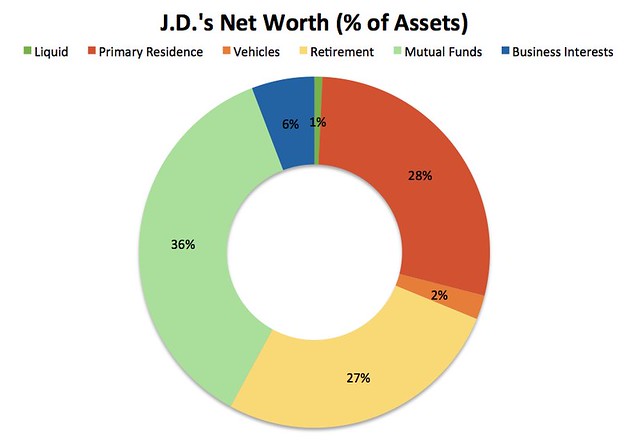 Another point of interest: My net worth contains less liquid cash than other folks at a similar level of wealth. And believe me, I feel it. It sucks. The older I get, the more I understand why it's important to keep at least some cash readily available in bank accounts so you don't always have to be selling mutual funds to generate working capital.

I'm not sure there's anything actionable to be gained from this info, but it's interesting to look at.

There are 35 reader responses to "How the things we own vary at different levels of net worth".