In March, I attended the SXSW Interactive Conference in Austin, Texas, and I had a chance to meet a few online personalities face-to-face, like former GRS staff writer Adam Baker of the Man vs. Debt blog. I also attended a session called The $100 Startup, a book reading led by Chris Guillebeau of The Art of Non-Conformity. 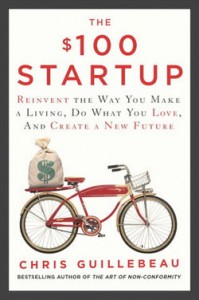 Long-time readers know that J.D. and Chris are good friends, which is why J.D.'s not reviewing this book. I, however, hadn't met Chris until attending his SXSW session. I'd like to think this would make me an unbiased book reviewer, but the truth is that the guy is just instantly likeable. His session that day felt much like it did to read his book: a personal conversation with a friend who sincerely wants to help you out.

So there's my disclaimer — nicest guy ever. Luckily for me, his book is a must-read for anyone who's harboring a desire to start a small business ('cause how awful would it be to have to write a scathing review of a book by the nicest guy ever?).

Chris has traveled to almost every country in the world and says he's met two kinds of people, those like himself who have the time and income to live the lifestyle they want, and those who feel trapped. So he set out to extract knowledge from the first group and boil it down into specific tactics and examples.

To say he did some serious research is an understatement. More than 1,500 entrepreneurs were considered for inclusion in the book. They had to meet the following qualifications:

Chris interviewed more than a hundred people, pored over more than 4,000 pages of surveys, and made hundreds of phone calls to compile the most critical lessons into a blueprint. In other words, this is not The Secret. This is an actionable guide that you can customize.

Here's an excerpt from the introduction, in which Chris describes his goal for the book:

“What if you could achieve your own life of freedom by bypassing everything you thought was a prerequisite? Instead of borrowing money, you just start — right now — without a lot of money. Instead of hiring employees, you begin a project by yourself, based on your specific personal combination of passion and skill. Instead of going to business school (which doesn't actually train people to operate a small business), you save $60,000 in tuition and learn as you go.”

I know more than a few smart, capable, would-be entrepreneurs who never take the leap because of invisible barriers. “I don't have an MBA,” or “I need $50,000 from the bank.” Maybe you do need those things for some kinds of businesses, but throughout the book Chris shows example after example of people who started businesses they love without either of those things.

Related >> Anyone Can Start a Side Business

The book is broken up into three major parts:

Along the way Chris uses examples and stories from the real-life entrepreneurs he interviewed to illustrate each tactic. But let's talk specifics.

Here are my favorite takeaways from the dog-eared pages of my copy of The $100 Startup:

Finally, one of my favorite parts of the book is the appendix in the back of 25 businesses, their offering, and the benefit. Everyone thinks they can identify features and benefits, but most people are bad at it. I'm not great at it myself. Instead of telling you “sell the benefits!” like so many business books do, Chris shows you how it's done. One example he gives is Paleo Plan, which offers a weekly diet and recipe guide. But what do customers really want? A plan? No, Paleo Plan customers want to take control of their health by eating naturally, while leaving the details to someone else. Chris says instead of teaching your customer to fish, just give them the fish! Give them what they actually want.

If you have zero desire to start a business or if your goal is to be the founder of a big Internet startup, this book isn't for you. But if you're interested in starting a small business doing something you're passionate about, I highly recommend it.

Reading The $100 Startup feels like having a coffee with a friend — a friend who gently tells you to drop your lame excuses (like needing a bank loan or a 30-page business plan), then gives you homework. It's the book I wish I had when I was trying to find my own path to self-employment.

10 tips for when you can’t find a job

Yes! Sign up and get your free gift
31 Comments
Oldest
Newest Most Voted
Inline Feedbacks
View all comments