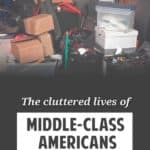 Long-time readers are familiar with my decade-long war on Stuff. I was raised in a cluttered home. From a young age, I was a collector. (Some might even say a hoarder!) After Kris and I got married, I began to acquire adult-level quantities of Stuff. When we moved to a larger house, I found ways to acquire even more Stuff. I owned thousands of books, thousands of comic books, hundreds of compact discs, and scads of other crap.

Eventually, I'd had enough. A decade ago, I began the s-l-o-w process of de-cluttering.

While I still bring new Stuff into the house — Kim would tell you I bring too much Stuff home — I'm not nearly so acquisitive as I used to be. In fact, for the past decade I've purged far more than I've acquired. And that process continues, week by week, month by month, year by year.

The Cluttered Lives of the American Middle Class

Turns out, I'm not the only one fighting this battle. Many Americans struggle with clutter. This is one reason for the popularity of the simplicity movement. When I visit my friends who live in tiny houses, they rejoice at the lack of Stuff in their lives. And it's why books like Marie Kondo's The Life-Changing Magic of Tidying Up become popular bestsellers. (That book is great, by the way. Here's my review from my personal site.)

A while ago, I stumbled on a video that documents the work of a group of anthropologists from UCLA. These researchers visited the homes of 32 typical American families. They wanted to look at how people interacted with their environments, at how they used space. They also wanted to look at how dual-income, middle-class families related to their material possessions. They systematically documented the Stuff people own, where they keep it, and how they use it.

This team produced a book called Life at Home in the Twenty-First Century, which records their findings. They also produced this twenty-minute video that provides an overview of the results:

“Contemporary U.S. households have more possessions per household than any society in global history,” says Jeanne E. Arnold. That's both shocking and unsurprising all at once.

Her colleague Anthony Graesch notes that our homes reflect this material abundance. “Hyper-consumerism is evident in many spaces,” he says, “like garages, corners of home offices, and even sometimes in the corners of living rooms and bedrooms.”

Graesch continues: “We have lots of Stuff. We have many mechanisms by which we accumulate possessions in our home, but we have few rituals or mechanisms or processes for unloading these objects, for getting rid of them.” All of this stuff causes stress. It carries very real physical and emotional tolls.

One interesting finding? Clutter bothers women more than men. This might be because the responsibility for cleaning the clutter generally falls to women.

“The United States has 3.1% of the world's children but consumes 40% of the world's toys,” notes Arnold. In households with children — or, in my case, puppies — the toys can take over the home. Children's toys and objects spill out of their bedrooms into living areas, kitchens, and bathrooms. The push to become consumers, to value Stuff, starts at an early age.

Why do modern kids have so many toys? It may be because there are so many playthings available so cheaply. There's more Stuff available for kids than there was fifty years ago, and that Stuff costs less. Plus, priorities seem to have shifted. Modern parents see spending on kids as a priority; parents fifty years ago did not.

It's not just kids, of course. Adults have their own brand of clutter.

For example, many families are guilty of stockpiling. They buy food in bulk, then stack their cupboards and fridges and pantries and garages to the gills. Naturally, most of these are “convenience foods”. (Fresh food wouldn't keep if bought in bulk like this.)

Note: This was something that Kim and I thought about a lot on our RV trip across the U.S. During our fifteen months on the road, we had limited space for food storage. There was a small-ish frige in the motorhome and a few cabinets for non-perishables. At home, we tend to buy food for a week (or more) at a time. And we're guilty of stockpiling some stuff too. (Don't ask me how much ketchup I have in the cupboard!) On the road, this was fundamentally impossible. We bought only what we needed for the immediate future. This forced us to be better at meal planning, and it made us much more aware of the kinds of foods we were buying.

The easy availability of convenience foods has some interesting effects on how families relate to each other. Longer ago, the household sat down to eat the same thing at the same time. That's not true anymore. Nowadays, each person tends to eat what they want, when they want.

“Families have bought into the idea that use of these foods will somehow save time,” Graesch says. But researchers have found that families only save about twelve minutes per meal when they use convenience foods. And at what cost?

During their research, the UCLA anthropologists looked at how families used the space in their homes. Unsurprisingly (to me), the kitchen tends to be the hub, the command center of the household.

“Everything transpires in kitchens,” Graesch says. “Activities are organized, schedules are co-ordinated, plans are made for the next day, meals are cooked, kids are doing homework in kitchen spaces. It's very, very intensively used. A lot of the material culture in kitchens speaks to this logistical center in everyday family lives.”

The refrigerator door is often a center for family artifacts. It's a place for family history and culture and nostalgia. But, says Arnold, “There seems to be a kind of a correlation between how much Stuff is on the refrigerator panel door and how much stuff is in the broader home.”

Bathrooms, too, can become important places to plan and prepare for the day. They're staging areas where we get ready to go out into the world.

With all of the chaos in other parts of the home, many parents work hard to make the master bedroom a sort of quiet retreat, a space isolated from the rest of the house. People value their master bedrooms so much, in fact, that they'll spend to remodel them into the oasis they desire instead of funneling their funds to remove actual bottlenecks (like bathrooms) or to optimize the spaces where the family spends most of its time.

In some ways, the master bedroom has become a symbolic space. It's a place of refuge.

Is clutter a uniquely American problem? I don't know. I doubt it. But I also suspect that because of our sheer material abundance, more of us struggle with clutter than folks in other countries. (I'd love to hear anecdotes or see stats on this subject, actually. Anyone have those?)

However, I do know that it this is another area where we can take charge of our lives. As I purge Stuff from my life, I gain a greater sense of satisfaction. I feel like I'm in more control of my environment — and myself.

Do you struggle with clutter? Is your home packed to the gills with Stuff? What steps have you taken to get rid of some of this crap? Or have you? (Maybe it doesn't bother you?)

There are 80 reader responses to "The cluttered lives of middle-class Americans".