Creating a will: It’s not as scary as you might think 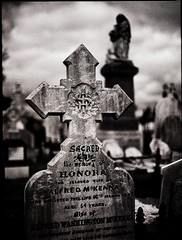 “I can't believe they haven't updated their wills,” said Sparky.

“They're both about 65,” he said. “Maybe a little older. They haven't updated their wills since I was five. If you go by the paperwork, when they die, I have to go live with one of my aunts. I'm almost 40.”

We both laughed. “At least it's my favorite aunt,” said Sparky. “If somebody has to become my guardian, I'm glad it's her!”

Though Sparky and I were making light of the situation, estate planning is serious business, and not just for those near retirement age. I don't mention it often — just in this annual Halloween post on the subject — but I do believe creating a will is a crucial part of personal finance.

Despite this belief, Kris and I have dragged our feet on our own estate planning. For two years we've been telling ourselves we'll get to it — next month. This year, however, we finally followed through.

I called my attorney, Dave, and he guided us through the process. Turns out creating a will wasn't difficult or scary. In fact, the most time-consuming part of the process was organizing the information, but that task was made easier with this handy will-planning document [50k PDF], which I've reprinted with Dave's permission:

This form collects information about your family and beneficiaries, your assets (including bank and investment accounts), and your debts. (Compiling this information is an excellent idea even if you're not creating a will.)

After we submitted our planning forms, Dave asked us to clarify our intentions regarding certain points. (Just what do I want done with my comic book collection when I die, anyhow? And, just for the sake of argument, if Kris and I both die at the exact same time, and so do our designated beneficiaries, then who gets our stuff? We both picked our alma mater, even though we hadn't discussed doing so.) After we'd given him all the information, he created drafts of the wills for us to approve. When we were sure that everything was satisfactory, we met at his office to sign the paperwork.

In a way, preparing our wills was anti-climactic. I've always believed the process was a Big Deal, and involved a lot of red tape. It wasn't like that at all. We simply gathered some information, answered a few questions, and then signed on the dotted line. For some people, there's more to estate planning than a simple will, but Kris and I don't have complicated needs — yet.

Our next task? Gathering our wills and birth certificates and other important documents and placing them together someplace safe. Any suggestions?

This is the annual GRS Halloween post on estate planning. Previous articles include a brief guide to creating a will (2006) and a brief overview of estate-planning software (2007). Photo by mugley.

The fall and rise of personal savings

The Secret History of the Credit Card