Do Experiences Lead to Greater Happiness Than Material Purchases? 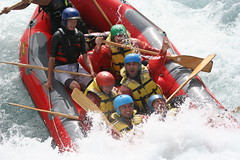 The August issue of the Journal of Consumer Research arrived in my mailbox yesterday. It contains an interesting article from Nicolao, Irwin, and Goodman entitled “Happiness for Sale: Do Experiential Purchases Make Consumers Happier than Material Purchases?” This is a topic we've skirted at Get Rich Slowly, but never fully explored. Many readers have offered anecdotal evidence that they get more “bang for their buck” by spending money on experiences instead of Stuff.

This new research supports that idea — but only for experiences that turn out well. Good experiences do bring greater happiness to consumers than buying Stuff. But bad experiences make us more unhappy than bad purchases. From the article:

Our results replicate those of Van Boven and Gilovich (2003), showing that, for positive purchases, experiences lead to greater happiness than material purchases. Also, there is a sense in which our results support the experience recommendation because we show that on average the most happiness obtained through purchasing is likely to be obtained through experiential purchases that turn out well.

However, the experience recommendation in its pure form is incomplete. Our findings suggest that a lifetime of negative experiential purchases might lead to quite an unhappy life and furthermore that negative material purchases may not leave as much of a negative mark.

In the general discussion, the authors review past studies to explore reasons that buying experiences might provide greater happiness. Here are a few examples:

“Thus, positive experiences may be correlated with the basics of human happiness,” write the authors. When we buy experiences, we often inadvertently purchase things that contribute to happiness.

A new $1000 flat-screen television won't give you social interaction, won't help you achieve your goals, won't give you exercise. By paying $1000 for a week-long bicycle tour of Oregon will do all three. The latter is more likely to make you happy.

A couple of other points from the article:

As I gradually reduce the Stuff in my life, I've been thinking about what I can do to improve my happiness in the future, to not become so absorbed with material possessions. Kris and I have already decided that we'd like to focus on travel. I'd also like to take some classes (photography, French). Essentially, I've decided on a sub-conscious level that I'd rather pay for good experiences than Stuff.

Can you really get rich quickly from fix and flipping homes?

When to replace your car

The Best Ways to Boost Your Retirement

The guilt of wealth

As featured in:
22 shares