In early August, Mr. Money Mustache came to Portland to speak at the sixth-annual World Domination Summit. After Pete and I presented the three-hour Money Boss workshop on Thursday, he took the main stage on Saturday to spread his message to an audience of nearly 1000 people.

Earlier this week, WDS HQ released video of Pete's talk and it's awesome. It's a great way to kick off this first-ever edition of Money Boss Theater (which I hope will become a regular Saturday feature around here).

Here's what Mr. Money Mustache has to say about how to be rich, happy, and save the world.

With the awesomeness of not one but two unicorns, Pete states his core purpose: “I don't give that much of a shit about your personal finances. What I care about is how much better a world we're all going to get to live in if we all become a bit more rational with our money.”

Pete says that money has the power to change the world, for good or for ill. He spends the bulk of his 24 minute talk exploring what he calls “three amazing facts that will make you rich”.

Almost Everybody Sucks at Money 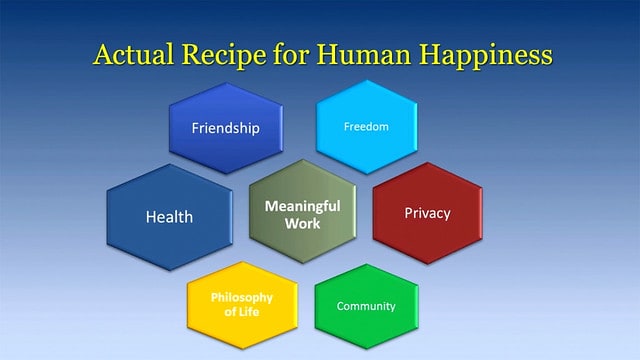 That's all you need to be truly happy. But people believe they need more, which is too bad. “Any money you spend that does not make you happier is wasted,” Pete says. But research shows that's most of what we spend.

“Even a life at the bottom of the U.S. spending scale is still way more than enough to be happy — as long as you spend it on the right stuff,” Pete says.

Getting Rich Enough to Retire Only Takes About Ten Years

The truth is the secret to early retirement is shockingly simple.

“It's not just me who has this early retirement superpower,” Pete says. “Most of us in the United States and other rich countries have options like this open to us.”

Your mandatory working career depends on only one factor. In Money Boss parlance, that factor is your profit margin, your saving rate. It's the difference between what you earn and what you spend.

Work Is Better When You Don't Need the Money

The purpose of work, Pete says, should be to create and to fuel your soul. That's very different than the purpose of earning money (which is simply to have money).

Retiring from a cubicle frees you to focus on work you actually love.

“If you can get yourself financially independent, not only does it give you the power to eliminate most of the bullshit from your life, but it frees your life’s work to become more truthful.”

That's it for the first-ever edition of Money Boss Theater. Know a good video that would be useful for folks in this community? A podcast episode? (Or an entire podcast?) Drop me a line! The more quality suggestions I receive, the more often this feature will appear on Saturday.

Great point! That’s exactly right. My hope in reaching FI isn’t too not work, but to be in a spot where I’m not forced to work. If you’re working without the fear of knowing you need to work, your true energy can really be put into your work.

I love this quote “Luckily,” Pete says, “[my wife and I] both grew up in Canada, so nobody had told us this is impossible. So we did it.”

Too often I feel like we are told what are limitations are and not what we can do.

I am really pushing to retire within the next five years as I am close to the 2/3rds mark that MMM talks about.

Thanks for sharing the video, I look forward to watching it! I saw MMM’s post not long ago about his preparation for the speech and thought at the time how I’d love to hear it.

He has a very empowering story which we’ve modeled our FI journey street and hope to reach that point in about 5 more years.

I was hesitant to watch the video because I find that MMM’s stuff either 100% hits the mark or drives me bat-**** crazy. Thankfully this one was close to the mark for me so I maintain my sanity another day.

“Any money you spend that does not make you happier is wasted” – BOOM!

As for videos, how about this one? 😉

(or more seriously, this one: http://www.budgetsaresexy.com/2015/07/jedidiah-jenkins-quit-job-bike-world/)

Love it! Just as great the second time around.

This was actually kind of great. Back to the core of Mustachianism, fake cult and all, and everything we loved about reading MMM to begin with. And he recovered well when he lost his place in his speech, his nerves were barely showing. So good to see the culmination of all his preparation. Thanks for posting.

The great thing about this video is the openness of it and the simpleness of it. It is an easy share and I hope this can open the eyes of many.

Since J.D. knows a thing or two about the Portland housing market, I am surprised that he would use Pete’s quote regarding life at the bottom of the U.S. spending scale. Not everyone is able to secure a favored niche in the housing hierarchy which affords them a financial advantage; most low-income Americans are unable to buy a home or to obtain a rent subsidy. Consider a childless non-elderly individual earning $12,000 a year; that’s 101 percent of federal poverty guidelines. It is unlikely that such an individual would receive rental assistance, and it is quite likely they will be… Read more »