I am sick. For the past ten days, I've been wrestling with a high fever, a cough, a persistent sore throat, and a general malaise that's kicking my ass. Basically, I'm the sickest I've been in over a decade. (The last time I was this sick? The evening that The Fellowship of the Ring premiered. I went to see it with friends, but don't remember a thing about that night because I was sick with a high fever. High fevers suck!)

Normally, I don't go to the doctor. My family has a funny thing about doctors, and usually prefer to let an illness run its course rather than to pay a doctor to tell us to “let the illness run its course”. Last Tuesday, though, I decided that sometimes discretion is the better part of valor. After four days with a high fever, and after sensing that something wasn't quite right with my lungs, I drove myself to urgent care.

“You have the flu,” the nurse practitioner told me. “And it'd be even worse if you hadn't had your flu shot. As it is, you may have pneumonia. It's been going around.”

She prescribed an inhaler, steroids, and an antibiotic, but she seemed skeptical that they'd help. “Make sure you call us if things don't improve,” she said. “In the meantime, you need to spend 72 hours in quarantine. You don't want to give this to anyone else, and you don't want to catch anything else that might be going around.”

So, for three days last week, I confined myself to my apartment.

But this article isn't about how sick I've been. This article is about my quest for health insurance. Earlier this year, I promised to share my experience as I looked for an individual policy.

That changed, though, when I asked for a divorce last autumn. I knew that I'd have to find my own coverage. In fact, Kris wouldn't allow the papers to be filed until I could demonstrate I had replacement coverage.

“No problem,” I thought. “How hard can it be to find health insurance? I'm the healthiest I've been in my life!” Haha. Turns out, it's not as easy as it sounds.

My first stop was eHealthInsurance.com. Many people (including several GRS readers) had recommended this site as a great way to compare health insurance and to apply online without much hassle. It sounded perfect. Before Kris and I left for our trip to South America in February, I filled out an application. It seemed simple, and I had no doubt I'd be approved. 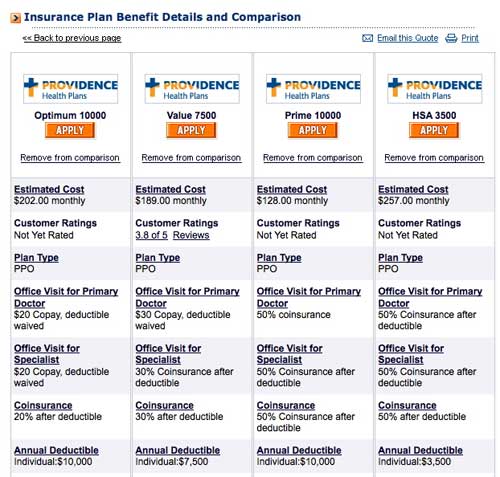 Some of my options at eHealthInsurance

While we were in Argentina, I got an e-mail that said my application for health insurance had been rejected, but didn't offer any explanation. When I got home, there was a letter waiting for me in the mail that gave more detail. Turns out, I had a pre-existing condition that caused my application to be rejected. Five years ago, when I was fifty pounds heavier, I suffered from sleep apnea. Sleep apnea is a risk factor for other diseases, and insurers don't like it. Never mind that I no longer have sleep apnea, that I'm fifty pounds lighter than when I had it, and that my health has never been better. There's no way to convey that info on an application. Instead, I was turned down for health insurance.

I went back to eHealthInsurance.com to apply for a different policy, but there's a question on every application: “Has any other carrier turned you down for health insurance during the past 90 days?” It turns out that once one carrier turns you down, all carriers will turn you down. (This isn't strictly true, but it's mostly true.)

I decided that my best bet was to just just continue receiving coverage through my same carrier. My logic was impeccable: I'd been with them for years already and they knew my medical history, so surely it would be a piece of cake to carry things forward. Again, this didn't turn out to be true.

I called my carrier to ask about porting my policy from Kris' work account to individual insurance. “We can't do that,” they told me. “You have to call the employer that has the policy.” So I did. But Kris' employer told me they couldn't port it forward either. “Your only option is COBRA,” they told me. (COBRA is ongoing medical insurance available when your existing policy ends. It's expensive.)

I'm telling this story in a calm, even-handed fashion, but I wasn't feeling calm and even-handed during the process. I was feeling frustrated. I couldn't figure out where to turn.

In the end, it was my colleague Mark Silver from Heart of Business who provided the answer. “I used an insurance broker to find health insurance,” he told me. “Here. I'll give you his contact info.”

Taking Matters Into My Own Hands

Because I hate e-mail conversations and because I hate getting the run-around by phone, I tend to prefer face-to-face business transactions. Yes, they take more time, but I find them easier. It's possible to discuss shades of grey and to explore multiple possibilities in person. For this reason, I drove across Portland to visit Ron Tate at Tate Insurance Services. I explained my situation.

“I need health insurance,” I said. “But I only want catastrophic insurance. I'm willing to self-insure almost everything.” Because I have substantial savings, I'm willing to pay more for routine coverage if that means my monthly insurance premiums are low. In the long-term, this should save me tons of money.

After a week of waiting, I got word that my application had been rejected. Again. And again because of sleep apnea. “We have a couple of options,” Mr. Tate told me. “Because you've been rejected, you qualify for the Oregon Medical Insurance Pool, which is for high-risk customers like you. It's nto cheap though. Or you can apply elsewhere. Or we can ask for an exclusion for the sleep apnea. That means you won't have coverage for that condition, but everything else will be normal.”

“To be honest,” I said, “I just want to get this finished. I feel like I've been working on this for weeks, and I'm tired of it. It shouldn't be this hard to get health insurance.”

My plan options at my insurance provider

In fact, I was so frustrated that I went home from Mr. Tate's office and took matters into my own hands. I did what I should have done from the start. I went to the website for my current carrier and filled out an application for personal health insurance. I chose the cheapest policy (which still costs $128 a month!) and indicated I was a current customer. And then I waited. Within a couple of days, I'd heard back that my application was approved.

That's a long, boring story, I know, but I'm certain it's typical of what everyone goes through when attempting to find health insurance on their own. It's not easy. In fact, it seems a little crazy that it takes that much work to get coverage.

During the process, I spoke with dozens of people about their own experience getting insurance, or about their experience with family members who've had to use health insurance lately. I'll be honest: I came away jaded. I'm far from being a socialist, but there's no question in my mind that the current health insurance system in the U.S. is broken. It's tough to find coverage, that coverage is expensive, and once you have it, it's like a game for the insurance companies to get out of paying. This is dumb. I'd be happy to try some sort of socialized medicine as an alternative, and so would every single person I spoke to during this process. (But, of course, I live in Portland where even moderates like me would be considered liberal in other parts of the country.)

And, of course, the conclusion of this story is that I had to put my insurance to use last week. I have no idea how much my doctor's appointment, x-ray, and prescriptions would have cost without insurance (and neither do the doctors, actually), but I do know that my total out-of-pocket cost was $29.26. (This may go up after the insurance company decides whether I owe more, but that's the current total.)

I'm still not healthy. There's still gunk in my lungs. I'm still running a mild fever. I still feel like sleeping all day. But it's good to know that if I do need medical help, I have the insurance situation sorted out.

Why financial literacy fails (and what to do about it)

My 2020 in review: Steps in the right direction

The pros and cons of gift cards

Are you ready for a major power outage?