Mike writes, “I'm at a point in my investing life where I disagree with the guy, but what an interesting, compelling story.” (For reference, last year Mike shared a guest post about direct stock purchase plans.) What is this interesting, compelling story? It's about how Murray, who used to work for Goldman Sachs, Lehman Brothers, and Credit Suisse Fist Boston, has abandoned the prevailing paradigm of active investment management and now, as his dying act, has made it his mission to educate people about the virtue of index funds.

What are Index Funds? 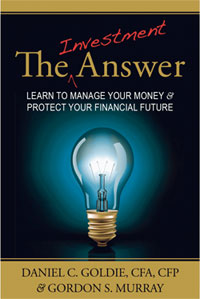 Because it's been a long time since I wrote about index funds, let me briefly cover the basics for newcomers. As you probably know, mutual funds are collections of stocks. They're like baskets containing many eggs. If one of the eggs breaks, it may cause a bit of a mess, but there's no reason to panic, because you have lots of other eggs from which to choose. This practice is known as diversification. And contrary to your intuition, owning many stocks instead of one stock not only decreases risk, but also increases returns.

Index funds take diversification to an extreme. Index funds are mutual funds, but instead of owning maybe twenty or fifty stocks, they own the entire market. (Or, if it's an index fund that tracks a specific portion of the market, they own that portion of the market.) For example, an index fund like Vanguard's VFINX, which attempts to track the S&P 500 stock-market index, tries to own the stocks in its target index (the S&P 500, in this case) in the same proportions as they exist in the market.

Well, because indexed mutual funds base their investments on numbers and not on intuition, they require very little human involvement. Nobody's making the buying decisions. Computers are able to track market movement and then re-balance the fund as needed. This means that index funds have very small expense ratios. That is, they don't cost very much to operate. Over the long term, these low costs mean owners of index funds earn (or keep) more money.

Do index funds always come out ahead in a given year? Not at all. In fact, they're usually in the middle of the pack. By definition, index funds produce an average market return — no more, and no less.

However, over the long term — ten years, or twenty, or thirty — a remarkable thing happens. Index funds float to the top. It turns out that average performance in the short term is actually above average in the long term. Some mutual-fund managers are able to out-perform the stock market for a year or two, but they're not able to do this for a decade. In fact, over long periods of time, actively-managed funds tend to underperform the market.

Part of this is because — Warren Buffett aside — nobody can reliably pick winning stocks year after year. But the biggest reason index funds outperform actively-managed mutual funds over the long term is this: Index funds are cheaper. The average mutual fund has an expense ratio of about 2%. That is, for every $100 you have invested in the Magnificent Brothers' Growth Fund, you're paying a $2 fee every year. Index funds charge just 0.20% (or less!). Over time, this difference is huge.

In fact, over and over, academic studies have shown there are two things that most influence individual investment returns: expense ratios and investor behavior. Keep your expenses low and you're more likely to achieve above-average results. And stop trying to time the market!

But don't take my word for it. If you haven't made the time to read up on index funds, start by reading the New York Times article about Gordon Murray's legacy. Then head to the public library and pick up a book by John Bogle or William Bernstein or Daniel Solin. Or take the time to browse past GRS articles, such as:

I haven't written about investing much lately because my investing habits are boring. I no longer have the urge to beat the market. I don't have to prove I'm better than everyone else. I've read dozens of investment books, many of which come to the same conclusion as The Investment Answer. I'm persuaded. Though I may not write much about investing, I'm doing plenty of it. But all of my money is pumped into index funds. And I never touch them.

The 13 Commandments of Savvy Consumers

How to Prepare for Buying a Home

Jump-start your career with a personal business model