Our roof repair: A typical tale of working with contractors

Written by J.D. Roth
|
|
Comments are off

My wife and I have been homeowners for nearly twenty years. In that time, we've done a lot of home improvement ourselves. But we've also learned when it's best to hand projects to the pros. (To be honest, this is most of the time.) It's great to be able to do small jobs yourself, but it's also important to recognize when something's beyond your ability.

During the past 18+ years, we've learned that working with contractors always seems to follow a similar pattern. I'm not sure it has to be like this, but it generally seems to be so. To illustrate our typical experience, I took notes on our most recent repair job. Today I'll share our tale.

Note: At the recent Financial Blogger Conference, a lot of folks expressed fondness for the Personal Finance Hour, the podcast that I used to do with Jim from Bargaineering. I'll admit I'd forgotten about it. That was a fun gig. Here's an episode we did about home improvement.

A Leak in the Roof 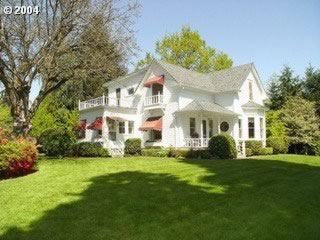 In 2004, we bought a hundred-year-old farmhouse on more than half an acre. It's a lovely place in a park-like setting, but it's also a bit of a money pit. There's often something going wrong.

We've had trouble with the roof, for instance, since the first summer we moved in. Initially, we blamed the insulation contractors, who had cut holes in the roof for added ventilation but then failed to adequately seal around their work. As a result, the vents eventually developed large leaks.

It turns out, however, that the shoddy vents were only part of the problem. One section of the roof is essentially flat, which means it needs a different kind of roofing material than most of us are used to. When the previous owner last installed a new roof, he cut corners. (He was always cutting corners. Many of our woes are because the previous owner did his own work and cut corners.)

As a result, the flat section of the roof developed a leak. Or several. While I was traveling in July, Kris called me in a panic to tell me that Portland was having a severe rainstorm and that water was pouring into an upstairs bedroom — right next to my precious comic books. My comics were safe, thank goodness, but this certainly spurred me to action.

The roofing problem was one reason I canceled my planned trip to England. I stayed home, called contractors, and shepherded the project toward its slow completion.

Whenever we're faced with hiring a contractor, we get multiple bids for the job. This time was no different. We like to take recommendations from friends, though this doesn't work in every instance. This time, for instance, nobody we knew had worked with a roofer recently. Instead, I contacted five or six local roofers via the web. On August 2nd, three of them came out to look at the roof.

After meeting with all three men and getting their bids, we decided to go with the second company. They seemed to have the clearest idea of what needed to be done, they had the lowest price, and they could start almost immediately. It almost seemed too good to be true.

The first sign of trouble was the constant delay. We're used to contractors putting us off, but this company did it again. And again. And again. When I met with the representative on August 2nd, he told me they could start within a week. HA! They didn't actually begin work until September 8th. Fortunately — or perhaps not — the job only took a day.

Mid-way through the repair, the company called me with bad news. “A lot of the plywood is rotten,” they told me. “That's why it was so soft. It'll take an extra four or five hours. And we'll have to charge your for material.” So, as usual, the cost on our planned repair ballooned. I should have been wary when the crew was still able to finish the job in a day despite the “extra four or five hours” replacing the plywood was going to take.

As I've mentioned before, we've been paying our neighbor Chris to do some handyman stuff around the place. He's been under-employed for a while, and I have more writing work than I do time, so this seems like a good exchange. (It's one way in which I value my time.) So, we paid Chris to climb up and paint the patches that had been uncovered by the roofing project. When he did, he found problems. 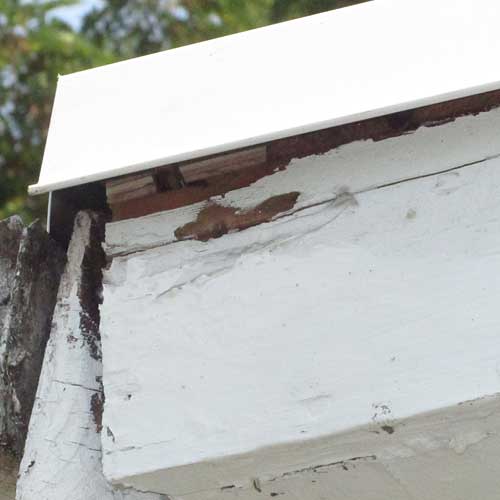 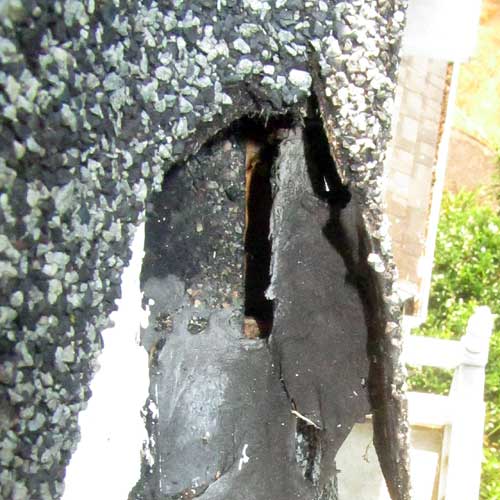 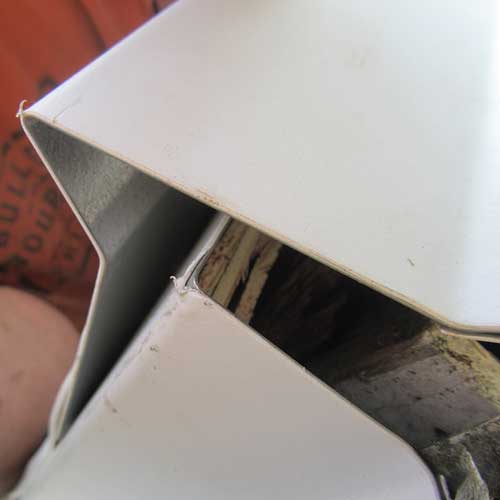 A gallery of photos of the botched roof repair. Click on an image to see a larger version.

Chris actually has experience with construction management, and is well-versed in the ways of roofing. He was flabbergasted at the quality of workmanship (or the lack thereof). “This looks like it was just rushed through,” he said. He borrowed a digital camera to take photos of all the things that were wrong with the repair. “If I were you,” he said, “I'd get them back out here to fix this. Otherwise you're still going to have leaks.”

I called the roofing company and asked them to send somebody out. To their credit, they were very contrite. They responded quickly and efficiently. They took copies of our digital photos back to the office, promising to send a crew out by the end of the week to make things right. And they did. They installed new flashing and caulked the spots where they'd nailed through the shingles. They spent several hours fixing their foul-up — at no additional charge to us, of course.

When they were through, Chris and I climbed back up on the roof. “Well, it's not perfect,” he told me. “But I'll admit that any further complaints would probably just be seen as nit-picking. They could have done better work, but this should be fine. Just keep an eye on things.”

So, we think things are fine, but I still a harbor a few worries. Every time it rains, I go upstairs and check to make sure there's no leak over my comic books. I don't do this just once, either. I'm sort of compulsive about it. Meanwhile, I dream of the day when we hire a contractor who is punctual, thorough, and reasonably priced. There are times I think this will never happen.

How to winterize your home

Your Personal Board of Directors

How to save money each month

Yes! Sign up and get your free gift
95 Comments
Oldest
Newest Most Voted
Inline Feedbacks
View all comments

As featured in:
83 shares
wpDiscuz