Kris and I pulled the plug on our television last week. We canceled cable, gave our DVD player to her sister, and moved the television to the workshop until we can find a buyer. We're now officially TV-free.

We haven't given up TV shows and DVDs entirely — we're just consuming this entertainment via other methods. Namely, we use:

The Netflix subscription costs Kris $20 a month, and our iTunes subscriptions cost about $215 per year. So, we're still paying $455/year for home entertainment, but that's less than half what we were paying five years ago.

No, I'm not able to watch sports on TV. But most of the time, I don't miss it. For big games, I can always go to a sports bar or a friend's house. I'm not sure what I'll do for the Olympics and the World Cup, both of which I enjoy. I'll worry about it when the time comes.

This latest move is the culmination of a years-long transition. We've been gradually weaning ourselves from TV. A couple of weeks ago, I realized that neither of us had actually turned on the television since before we left for Italy in September. That's right: For five months, I paid for a cable package we didn't use. That seemed like a clear indication that it was time to finally cut the cord. 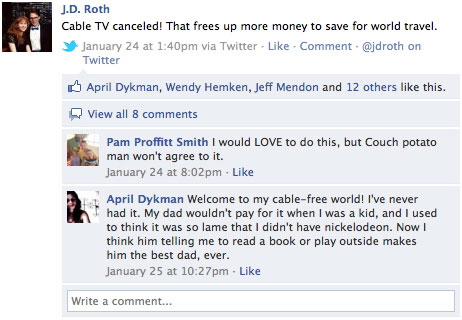 It may seem strange to some of you that Kris and I are willing to spend thousands of dollars on trips to Europe and Africa, but we're unwilling to pay $15 a month for basic cable. Actually, that's the point.

Contrast this with how most people spend. (And, in truth, how even financially-savvy folks spend a lot of their money.) We tend to spend on reflex. We buy things because we're expected to, because everyone else does. We spend to have what others have. We sign up for gym memberships that we never use, subscribe to magazines we never read, and pay for golf clubs that get buried in the garage. We make impulse purchases at the grocery store — or even on large items, like computers and cars. Most of the time, people spend without thinking.

But with conscious spending, you evaluate every purchase. You vote with your dollars.

I'm saying, for instance, that I'm willing to spend several thousand dollars for three weeks in Africa because this is an experience I value. In exchange, I accept that I'm giving up television, and that I've delayed replacing my car. (I'm in no hurry to upgrade my Mini, which is a good thing. I opted to drain my car-replacement fund so that I could afford this vacation.)

To put conscious spending in action, I've learned to ask myself questions before I buy:

Again, not all of my spending has been conscious over the past couple of years. I still make plenty of impulse buys. (The pocketwatch I mentioned above is a good example.) But whenever possible, I aim to analyze all of my purchases.

Conscious spending isn't restrictive; it's liberating. It can help you recognize when your spending is aligned with your values, and when it's just being made out of habit.

Now I'm looking for ways to reduce my cell-phone bill. I'm paying $80 a month for my iPhone plan. When my contract expires in a couple of months, I want to move to something cheaper. Doing this could free $20 or $40 or $60 a month. That's money that I can use for more important priorities — like exploring South America in 2012!

This weekend, we hired a friend's 12-year-old to help with yardwork. As we cut blackberry canes and pruned arborvitae hedges, Ian explained that he's saving his money. He wants to buy a remote-control car, but his dad persuaded him to hold on to his cash until he's sixteen, at which time he can buy a motorcycle.

Ian really wants the R/C car, but he wants the motorcycle more, so he's being patient. He's willing to wait four years to save for his goal. That, my friends, is conscious spending in action.

Later in the day, I talked to another boy who wants an iPod — but he's not willing to save for it. He'd rather spend his money today on video games and bubblegum. When I tried to talk to him about it, he didn't see any connection between the fifty cents he spent on a pizza-parlor video game and the iPod he wants so badly.

Time is more valuable than money

In praise of financial resilience

Yes! Sign up and get your free gift
167 Comments
Oldest
Newest Most Voted
Inline Feedbacks
View all comments