Five ways to outwit the ATM

Written by Donna Freedman
|
|
Comments are off 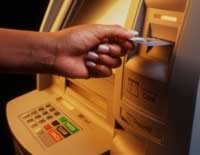 Automated teller machines are from the devil, and debit cards are Satan's imps.

Notice how $20 bills have become the coin of the realm, as it were? (I've even seen little kids use them to pay for candy bars, which is just scary.) Once that $20 is broken, what are the chances that you'll take pains not to waste the rest?

In the past year I've heard the same issue from a number of financial coaches and budgeting experts: Too many clients withdraw $20, $40, $60 or more but can't really account for how it was spent.

To make matters worse, banks are hiking their ATM fees, to as high as $5 for a non-customer transaction — and on the other end, too, as your own bank penalizes you for going out of network. Imagine paying $6 or more for the privilege of withdrawing $20. (Dude, make it $200 because I have a genuine Rolex I'd love to sell you at way below retail, today only.)

These five suggestions will help you resist the siren call of “Easy money! Just enter your PIN!”

Be Your Own Cash Machine

This is a two-part process. On payday, withdraw — from your own bank's ATM — as much as you think you'll need until next payday. To find that magic number, simply consult your budget. If you don't have a budget, make one; Gail Vaz-Oxlade's article on GRS is a good way to start.

Tip: If the B-word sounds punitive to you, then call it a “spending plan.” Call it Billy Bob if you want. Just make one.

Naturally there will come the week when you pay for a child's field trip, hit a Saturday yard sale, or break down and buy snacks at the movies. You're out of cash by Tuesday and you don't get paid until Friday. Time for the other half of the equation: The coffee-can ATM, aka the cash cache.

Figure out an amount you're comfortable having around the house. (I shoot for $200, but the amount waxes and wanes.) Next, figure out a really superb hiding place. Remember that burglars will almost always empty out desk and dresser drawers, and one of the first places they'll look is under the mattress.

Tip Don't make the hiding place so clever that even you can't find it.

Suppose you haven't built your at-home ATM, or suppose you're far from home when you become cash-poor. Discipline yourself to use only an in-network machine:

However: Before you seek budgetary backup, determine if it's really necessary. School yourself to think about withdrawals in a logical, methodical way, i.e., to avoid them whenever possible. Which leads us to…

Ask Yourself Exactly What You'll be Using It for

“I just want some extra cash for the rummage sale/street fair/strip club” is not the correct answer.

How much can you afford to spend in any of those places? Will you be withdrawing this cash from the “household” or “entertainment” portion of your budget, or will you conveniently forget the extra drain on your funds?

If you can't account for it, don't take it out.

Hint: A $5 funnel cake at the street fair is a want, not a need. If you decide to buy one, make sure it's deducted from your “fun money” budget later. Because let's face it: Funnel cakes really are fun.

Too late! I already took it out!
Then put it back, you numbskull. Seriously. If you don't actually need it, or if you only need $20 but took out $40, put some or all of the cash in an envelope and re-deposit it. Problem solved.

“But what if I need that extra money later?” you wail.

If you're reluctant to put the money back, take a deposit envelope with you when you leave the ATM. Each time you buy something, put the receipt in the envelope and write down how much you spent on the outside. Add it up as you go. Perhaps by the sixth purchase of the day you'll look at the envelope and think, “Dang, I've already spent $57 in three hours! Maybe I don't really need this bookcase/necklace/table dance.”

Back at home, spread out the receipts and see just how that $40 or $60 got pissed frittered away. Can you live with this level of unconscious spending? Can you find other ways to meet your needs?

And can you remember this the next time you're tempted to get walking-around money from the no-armed bandit known as the ATM?

Stuff does happen (ask me how I know) and sometimes you really do have to come up with an extra $25 on short notice. Here's the problem: You'll probably have to take out $40 because most ATMs deal strictly in twenties.

You have a couple of options:

See if there's a way to break one of those double sawbucks on something you actually need. Not the two-buck strip of beef jerky at the gas station, but rather the free-after-rebate toothbrush at the drugstore. Re-deposit as much of that twenty as you can.

Or fold up the extra dough and put it in your shoe, to be taken out at home and added to your cash cache. If you have any class at all, you'll be too embarrassed to take money out of your Keds at the rummage sale, street fair or strip club.

Your other option is to…

Use an ATM Alternative

If there's something you need (not want), buy it at the drugstore or supermarket and ask for cash back. Ideally this item would be small enough to stick in a purse or coat pocket — dental floss, say, or a three-pack of condoms. (Either one can save you from a world of hurt later on. Consider them investments.)

Note: Do not use this as an end run around your entertainment budget. Stopping at Safeway for a loaf of bread and some tomato soup and then tacking on an extra $10 for movie popcorn is sneaky. It's not dumb, though.

You want to know what is dumb? Using one of those anonymous ATMs outside a convenience store at 3 a.m. Want to be robbed without the possibility of physical danger? Using a Brand X money machine increases your chances of being cleaned out. Not only will you pay those fees, you're more likely to be victimized by a “skimmer” device. An independent machine can be fitted with a skimmer before being set up; crooks have even been known to put up bogus ATMs for a short time, then harvest the data.

The ATM outside a bank is under video surveillance and less likely to be tampered with — but there are no guarantees. In fact, this article from The Consumerist details how crooks put a skimmer in a bank-lock door (which grabbed the data) and a camera over the bank's ATM (to grab the PINs).

Your best bet: Not using an ATM at all. (See all previous tips.)

Banks are businesses, and businesses are all about profit. Thus you shouldn't be surprised that they're out to make a buck. Just don't let it be your buck.

The cluttered lives of middle-class Americans

Can you be friends with rich people?

Calibrating and Circumventing the Cost of College

How to make money fast: Quick ways to earn money in 2021

As featured in:
26 shares