Secret phone plans? No contracts? Unadvertised payment plans with no interest? These are all available. But you'll never know until you ask.

I recently decided to switch carriers to T-Mobile, so I jumped on their website to start doing the math of the different plans that they offered. 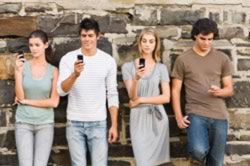 Just when I felt I couldn't possibly calculate the details of one more plan, I came across a section on the website that featured plans without contracts. This section was buried; in fact, I had to be logged on a friend's account who was already a customer to be able to see the plans at all.

I was confused by what I found. The plans without the contracts had a lower monthly cost than the plans with contracts. I figured there would be a premium fee to not be locked in to a two-year contract, but I was seeing just the opposite.

I went into a T-Mobile store and asked about the plans. They didn't show me any plans without a long contract. So I asked about a no-contract plan but the sales person was dismissive, saying “but you're going to have to pay full pay price for the phone.”

I insisted that I wanted to see the plan anyway, and he went to the back of the store to dig up the brochure for me.

The exact same plan without a contract was $110 a month instead of $140 a month, for a savings of $360 a year. I looked for the catch, but the only catch was the no-contract plan didn't offer the usual discount on a new phone.

The phone I wanted to buy retailed at $500, but cost just $200 with a contract. (That's a savings of $300, in case your math muscles aren't working.) I quickly did the math: I could save $360 per year without a contract, but would have to pay $300 more for the phone. That still left me with $60 in my pocket for not having a contract, meaning no insane fees if I wanted to leave the contract or switch carriers. Plus, everything after the first year was pure “profit”.

I soon learned from the sales associate that apparently no one had ever bought a phone outright and taken them up on the no-contract plan. It's not advertised and therefore usually not asked about. They just assume that no one will want to pay more now in order to save later.

The sales associate couldn't believe that I was “baller” enough (his exact words) to pay $500 for a phone — even though I was actually saving money within a year. He even asked me what I did for a living to be able to afford such an extravagance!

It gets better. When he went to ring up the phone, he asked me if I wanted a payment plan. I asked for the details and he told me that they offer no-interest payment plans so that people don't have to shell out the full cost outright. Meaning that if you didn't have the $500 for the phone, you could still save money by going with a no-contract plan!

Again, this isn't advertised. You just have to ask.

It made me wonder what other companies aren't telling me about ways that I can save because they assume that no one wants to pay more up front.

Call your cell phone company, cable company, or insurance company today and ask if they have any other options. They might have something without a contract, a AAA discount, or other ways to save. Many companies have plans they don't publish publicly. Check out these past Get Rich Slowly articles for more ways to save:

Remember: Don't be afraid to ask!

Laura Roeder is a social media marketing expert who teaches small businesses how to create their own fame and claim their brand online. She is the creator of the Creating Fame Classroom and Your Backstage Pass to Twitter. Laura's free program, The Dash, provides weekly actionable tips on how to leverage social media.

View all posts by Laura Roeder

How to stock your liquor cabinet on the cheap

The Fear of Missing Out