I'm not a fan of budgets. Even before I became a money writer, I found budgets onerous. Their prescriptions sometimes seemed arbitrary — why this much for groceries and that much for entertainment? — and they didn't do a good job of taking into account personal differences.

During a decade of writing about money, I've come to like budgets even less. They lead people to the mistaken belief that there's only one right way to handle money, a concept I hate.

That said, there are certain budgets that I do like.

My favorite descriptive budget comes from the Consumer Expenditure Survey, which looks at the money habits of average Americans. I feel like it provides a reasonable baseline for analyzing typical spending habits.

For instance, here's how the average American household spent its money in 2014:

Again, this info isn't useful for making decisions with your life, but it's a good starting point for looking at what is (and isn't) normal. 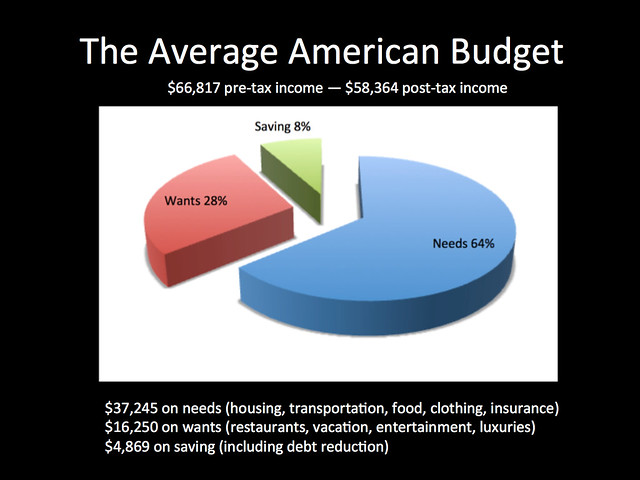 I've looked at a lot of broad budget frameworks in the past ten years, but my favorite remains the Balanced Money Formula from Elizabeth Warren and Amelia Tyagi. In their book All Your Worth, Warren and Tyagi argue that in order to achieve financial balance, your after-tax spending should be allocated like this:

The downsides of saving too little should be obvious to Money Boss readers. If you don't build a nest egg, your financial future is bleak and at the mercy of outside forces.

Warren and Tyagi are adamant that less than half your budget should go to Needs. If you pour too much toward necessities, you don't have room in your budget for fun or the future. Unfortunately, too many Americans spend 60% or 70% or more on Needs, which makes them feel as if they're victims of circumstance.

The authors are just as insistent that you should build room into your budget for Wants. “You should ask yourself,” they write, “are you making enough room for fun?” There are people who can afford to spend more on Wants but — due to a scarcity mindset or something else — are afraid to open the pursestrings. 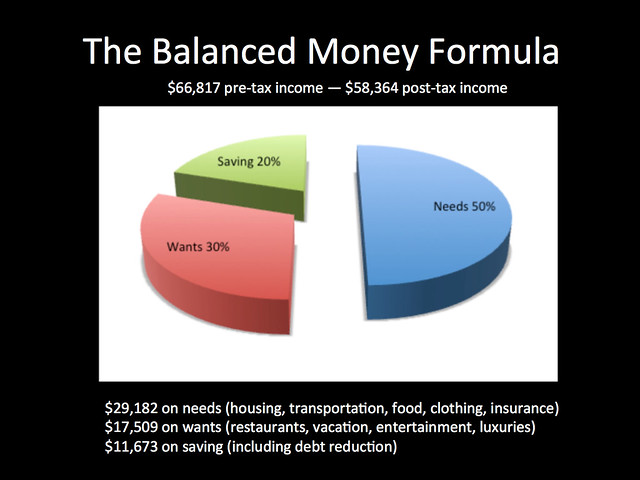 In the olden days, I was a vocal advocate for the Balanced Money Formula. I still think it's a great target for folks who are just starting to take control of their financial situation. If you're in debt or you're struggling to make ends meet, you should absolutely aim for this split.

But you know what? I no longer think the Balanced Money Formula goes far enough. It'll help you get on your feet, sure, and it'll allow you to save for the long term. But it still asks you to spend forty years in the rat race. I think there's a better way.

More and more, I'm an advocate of what we might call the Money Boss Budget. Its core tenet is: Save half your income. That's it. Save half. I don't care what you do with the rest of your money, but 50% of your after-tax income should be saved for retirement (or other long-term goals). I think most money bosses should aim for this sort of split:

It's tough to sell this idea. I hear a lot of objections to saving half your income. Really, though, most of them boil down to “I'm not willing”. There are plenty of folks in the leanFIRE movement who plan to retire with annual expenses of $40,000 or $30,000 or $20,000 — or less. Saving half is very, very possible, especially on an average American income.

Still, while I think it's possible for most families to follow the Balanced Money Formula with little modification to their lifestyle, I recognize that the Money Boss Budget is more challenging. The Wants spending isn't bad. I mean, the average American family currently spends 28% of its budget on non-necessities, while Warren and Tyagi advise 30%. So, 20% is a reduction — but not a drastic one. 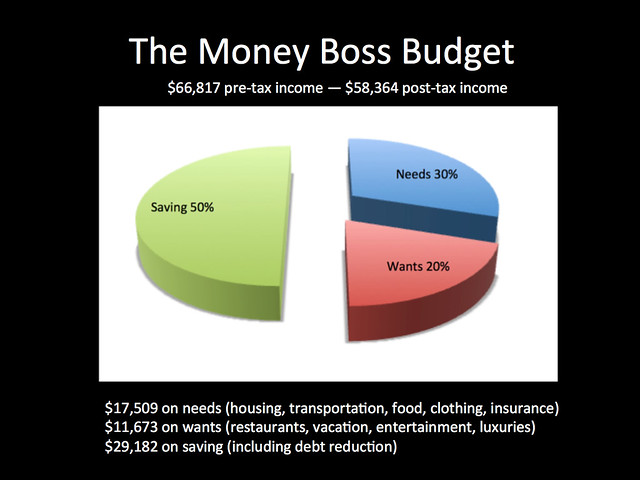 Instead, it's Needs spending that creates a problem. If the average American household currently spends 64% of its budget on Needs each month, it might be tough believing you can cut that in half. Heck, right now most Americans spend more on just one category — housing — than I want them to spend for all of their Needs combined!

Why aim for half? For one, it's an easy number to remember. Mr. Money Mustache recommends saving 64% (or more); I think 50% gets people to their goals quickly while also being easy to aim for. Saving half gives you flexibility in your life. You're able to make decisions without stressing about the financial consequences. With a 50% saving rate, your spending is likely sustainable even if something goes terribly wrong. Finally, saving half teaches you to value your money.

Naturally, I don't expect anyone to get to a 50% saving rate overnight. If you're the average American, you can't move from 64% Needs spending to 30% Needs spending instantaneously. It'll take time. That's okay. Start by aiming at the Balanced Money Formula. Once you've reached that, focus on 10% increments.

Here's what I mean:

Let's say you start in the average position. You spend a year shifting things to achieve a 50/20/30 split. Great! Now challenge yourself to boost your saving (and debt reduction) from 20% of your budget to 30%. Trim some from Needs and Wants. Once you get to 30% saving rate, aim for 40%. At the same time, drop your discretionary spending down to 20%, which is the long-term target under the Money Boss Budget. If you can reach a 40/40/20 split, that's huge!

Note that the Money Boss Budget is meant for the wealth accumulation phase of your life. Once you've reached Financial Independence, after you've retired, then you enter the wealth preservation stage of money management. There, your spending looks very different. (Little, if anything, goes to Saving — because your nest egg becomes your source of income.)

Today, in 2016, I'm still not a fan of budgets. There are indeed times I'll track my own spending so that I can get a realistic idea of where my money goes — in fact, that's one of my projects for 2017 — but I chafe at the prescriptive nature of traditional spending plans. That said, I think almost everyone should be aware of how much they spend on Needs, Wants, and Saving. And I think more Americans should strive to save half their income.

As you flex your money muscles, cutting costs and boosting income, you'll build financial confidence. As you discover you can pay off debt and increase savings, your other financial goals will seem less intimidating. Each financial accomplishment creates the confidence to propel you to the next.

Do you budget? Why or why not? What's the basis for your budget? And, more to the point, what is your saving rate? After all, personal profit is the single best measure of how efficiently you're moving toward your goals — financial and otherwise.

There are 40 reader responses to "The money boss budget".