I'm home! Over the past two weeks, I drove 1625 miles across across seven southeastern states. I had a blast hanging out with readers, friends, and colleagues. Plus, it was fun to explore some parts of the country that Kim and I skipped during our RV trip a few years ago. Most fun of all, though, was talking to dozens of different people about money.

After two weeks of money talk, I have a lot to think about. I was struck, for instance, by how many people are paralyzed by the need to make perfect decisions. They're afraid of making mistakes with their money, so instead of moving forward, they freeze — like a deer in headlights.

It might seem strange to claim that the pursuit of perfection prevents people from achieving their financial aims, but it's true. Long-time readers know that this is a key part of my financial philosophy: The perfect is the enemy of the good.

Here, for instance, is a typical reader email:

Thirty-plus years ago I was making much less money than when I retired so my tax rate was lower. I sometimes wonder now if it would have been better to pay the taxes at the time I earned the money and invest and pay taxes all along rather than deferring the taxes. You can make yourself crazy thinking about stuff like that!

Yes, you can make yourself crazy thinking about stuff like that. This reader retired early and has zero debt. They're in great financial shape. Yet they're fretting over the fact that tax-deferred investments might not have been the optimal choice back in 1986.

Regret is one of the perils of perfectionism. There are others. Let's look at why so many smart people find themselves fighting the urge to be perfect.

For a long time, I was a perfectionist. When I had to make a decision, I only wanted to choose the best. At the same time, I was a deeply unhappy man who never got anything done. Although I didn't realize it at the time, the pursuit of perfection was the root of my problems.

In 2005, I read The Paradox of Choice by Barry Schwartz. This fascinating book explores how a culture of abundance actually robs us of satisfaction. We believe more options will make us happier, but the increased choice actually has the opposite effect. Especially for perfectionists.

Schwartz divides the world into two types of people: maximizers and satisficers. Here's how he describes the difference:

Choosing wisely begins with developing a clear understanding of your goals. And the first choice you must make is between the goal of choosing the absolute best and choosing something that is good enough. If you seek and accept only the best, you are a maximizer…Maximizers need to be assured that every purchase or decision was the best that could be made.

In other words, maximizers are perfectionists.

“The alternative to maximizing is to be a satisficer,” writes Schwartz. “To satisfice is to settle for something that is good enough and not worry about the possibility that there might be something better.”

To maximizers, this sounds like heresy. Settle for good enough? “Good enough seldom is!” proclaims the perfectionist. To her, the satisficer seems to lack standards. But that's not true.

A satisficer does have standards, and they're often clearly defined. The difference is that a satisficer is content with excellent while a maximizer is on a quest for perfect.

And here's the interesting thing: All of this maximizing in pursuit of perfection actually leads to less satisfaction and happiness, not more. Here's what Schwartz says about his research:

Schwartz is careful to note that being a maximizer is correlated with unhappiness; there's no evidence of a causal relationship. Still, it seems safe to assume that there is a connection.

I've seen it in my own life. 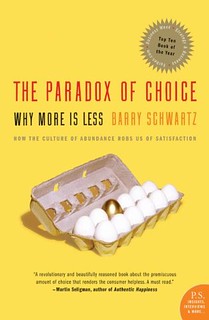 For a long, long time, I was a maximizer. When I had to make any sort of decision, I researched the hell out of it. I wanted to buy and do and have only the best. But you know what? No matter how much time I put into picking the perfect product, it always fell short of my expectations. That's because there's no such thing as a perfect product.

In the olden days, for instance, if I needed to buy a dishwasher, I would make an elaborate spreadsheet to collate all of my options. I'd then consult the latest Consumer Reports buying guide, check Amazon reviews, and search for other resources to help guide my decision. I'd enter all of the data into my spreadsheet, then try to find the best option.

The trouble? There was rarely one best option for any choice I was trying to make. One dishwasher might use less energy while another produced cleaner dishes. This dishwasher might have special wine holders while that had the highest reliability scores. How was I supposed to find the perfect machine? Why couldn't one manufacturer combine everything into one Super Dishwasher?

It was an impossible quest, and I know that now.

Nowadays, I'm mostly able to ignore my maximizing tendencies. I've taught myself to be a satisficer. When I had to replace my dead dishwasher three years ago, I didn't aim for perfection. Instead, I made a plan and stuck to it.

Armed with my Consumer Reports buying guide (and my phone so that I could look stuff up online), I marched into the local Sears outlet center. In less than an hour, I had narrowed my options from thirty dishwashers to three. With Kim's help, I picked a winner.

The process was quick and easy. The dishwasher has served us well for the past three years, and I've had zero buyer's remorse.

A Trivial Example
At Camp FI in January, one of the attendees explained that he's found freedom through letting go of trivial decisions. For things that won't have a lasting impact on his life, he doesn't belabor his options. Instead, he makes a quick decision and moves on.

In restaurants, for instance, he doesn't look at every item on the menu. He doesn't try to optimize his order. Instead, he makes a quick pass through the list, then picks the first thing that catches his eye. “It sounds silly,” he told me, “but doing this makes a huge difference to my happiness.”

For the past four months, I've been trying this technique. You know what? It works! I now make menu choices in seconds rather than minutes, and my dining experience is better because of it. This is a trivial example, I know, but it's also illustrative of the point I'm trying to make.

Studies have shown that perfectionists are more likely to have physical and mental problems than those who are open-minded and flexible. There's another drawback to the pursuit of perfect: It costs time — and lots of it. To find the best option, whether it's the top dishwasher or the ideal index fund, can take days or weeks or months. (And sometimes it's an impossible mission.)

The pursuit of perfection is an exercise in diminishing returns: 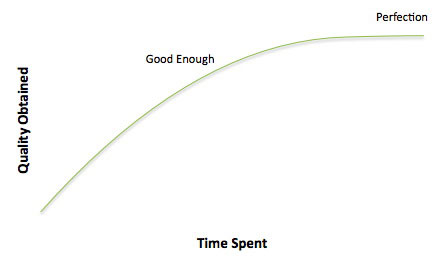 Quality is important. You should absolutely take time to research your investment and buying decisions. But remember that perfect is a moving target, one that's almost impossible to hit. It's usually better to shoot for “good enough” today than to aim for a perfect decision next week.

Procrastination is one common consequence of pursuing perfection: You can come up with all sorts of reasons to put off establishing an emergency fund, to put off cutting up your credit cards, to put off starting a retirement account. But most of the time, your best choice is to start now.

When you spend so much time looking for the “best” choice that you never actually do anything, you're sabotaging yourself. The perfect is the enemy of the good.

If your quest for the best is making you unhappy, then it's hurting rather than helping. If your desire to get things exactly right is preventing you from taking any sort of positive action, then you're better off settling for “good enough”. If you experience regret because you didn't make an optimal choice in the past, force yourself to look at the sunny side of your decision.

I don't think perfection is a bad thing. It's a noble goal. It's not wrong to want the best for yourself and your family. But I think it's important to recognize when the pursuit of perfection stands in your way rather than helps you build a better life.

There are 13 reader responses to "The perfect is the enemy of the good".