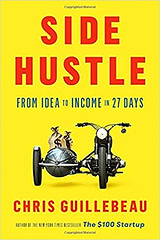 In my spare time recently (which isn't much), I've been reading Side Hustle, the new book from my friend Chris Guillebeau. Because CG is a friend, I'm not sure I can provide an objective review of the book, so I'm not going to try. Instead, I'll give a brief summary and then share some of my own experiences earning money on the side.

Fundamentally, there are only two ways to improve your financial situation: You can earn more or you can spend less. Most money writers focus on the “spend less” side of the equation. That's great, but there's only so much you can cut. Eventually, if you really want to pursue your goals with passion, you're going to have to earn more. “More income means more options,” Guillebeau writes. “More options mean more freedom.”

For many folks, a side hustle is a smart way to earn more. A side hustle, Guillebeau says, is “a moneymaking project you start on the side, usually while still working a day job. In other words, it's a way to create additional income without taking on the risks of going full throttle into the world of working for yourself.”

The beauty of side hustles is that they can be started with little or no money. They're most often passion projects, ways for a person to take something they already love and maybe earn a bit of extra cash.

Guillebeau says there are five core steps to starting a side hustle:

But the most important ingredient to starting a successful side hustle is action. If you don't take action, nothing else matters.

Obviously, there's much more to the book than that, but those are the core concepts. If you've considered making money with a side project, Side Hustle is a book filled with ideas and info that can help you start earning money in your spare time.

If you're less into books and more into podcasts, check out Guillebeau's daily Side Hustle School, which profiles casual entrepreneurs from all walks of life. (You might also enjoy Nick Loper's Side Hustle Nation.) 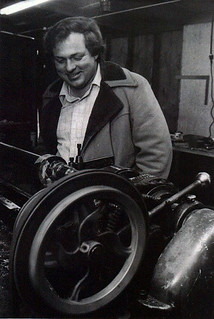 As I read the Side Hustle, my mind drifted to my own side hustles, and to those of family and friends.

As I've mentioned many times before, my father was a serial entrepreneur. He was always starting businesses. Even when he worked for other people — selling staples, selling industrial supplies, selling boxes — he had something brewing on the side.

When I was very young, for instance, he decided he wanted to get in on the health food craze of the mid-1970s. In his spare time, he built a wheat grinder. After showing his prototype around, he decided to make and sell them to health food stores around Oregon. This side gig blossomed into an actual business, and within a few years Harvest Mills was also building and selling food dehydrators.

Later, after Dad had sold Harvest Mills and returned to sales, he dabbled in lots of other things.

None of these ventures was particularly successful. But eventually he started Custom Box Service, which still supports our family today.

With a dad like mine, it's no wonder that I grew up wanting to run businesses of my own. In grade school, I would repackage my duplicate Star Wars and sports cards to sell to other kids in class. When I finished reading my Hardy Boys books, I'd sell those too. My friends and I drew comics to sell in the school store. (True story: Several years before the Teenage Mutant Ninja Turtles were created, one of my own comics was about a team of super-hero turtles!)

As an adult, I pursued side projects too. While working at the box factory, I took computer programming classes. Then I got a job (a couple of jobs, actually) programming at a local college. At one time, I was working three jobs totalling 60+ hours per week! I earned some good money with my side hustles — but I spent it all on stupid stuff. (I hadn't yet become a money boss, hadn't discovered how to get rich slowly.)

From there, I moved on to computer consulting. I repaired computers for family and friends, and I helped set up their networks. This in turn led to building websites — including this website, Get Rich Slowly.

That's right: Get Rich Slowly started as a side hustle. It was a way for me to earn some extra cash, money I could use to dig out of debt.

And that's the thing about side hustles. While most never amount to much, some turn into something bigger. Sometimes a passion project turns into something huge.

As much as this stuff is in my blood, I don't want to pretend that side hustles always work out. They don't.

My computer consulting gig, for instance, never amounted to much. Sure, I made a few thousand dollars from it, but it took tons of time. The money was never worth my while. And of the many businesses my father started in his spare time, only two ever really made money. (Still, two out of ten isn't bad, right?)

More recently, my girlfriend Kim tried a side gig that didn't turn out. While working her day job as a dental hygienist, she set up an online store during her evenings and weekends. She sold teething necklaces. People liked the necklaces, and she sold several hundred, but ultimately she found she wasn't making money. She was only breaking even. After two years, she decided to pull the plug. (Kim doesn't regret the experience; it just wasn't profitable.)

I know other folks who have tried side hustles with varying degrees of success. I have a friend who makes and sells grapeseed oil. I know several people who dabble in rental properties. I know a woman who designs websites in her spare time. I've met several folks who write books and/or articles to make extra money. Some folks earn tons from their projects; others only make enough to keep to barely keep the business going.

Ultimately, though, I think side hustles are mostly awesome. Even if they don't bring in big bucks, they give you experience with entrepreneurship. They teach you to be proactive and self-directed. And many times they do help you to supplement your income.

What about you? Have you ever pursued a side hustle? How did it turn out? What would you do differently if you had to do it again? Would you recommend that others start their own side gigs? What advice can you offer?

There are 11 reader responses to "Side hustles: The good, the bad, and the ugly".