The difference between a career and a job

What is the difference between a career and a job? Trent at The Simple Dollar recently suggested the following dichotomy:

Though I agree with Trent on many things — our financial philosophies are very similar — I don't agree with him on this. I believe that all jobs deserve your best effort, and I believe the distinction between a job and a career is artificial.

During the summer after my freshman year of college, I worked as a busboy at the Holiday Inn. I was the best busboy I could be. While the other guys stood around during slack times, I looked for ways to help in the kitchen or to prepare for the lunch rush.

As a result, I got better tips from the waitresses. The manager trained me to run the cash register. Sometimes I even got to help the pantry chef. I wasn't looking for a career in food service, and I wasn't trying to brown-nose. But I enjoyed the work and gave it all I had. This made the job fun, and earned respect from people who mattered: from my boss, and from his boss, the hotel manager.

Eventually I was given a chance to wait tables. Though I tried, I wasn't particularly good with the morning breakfast crowd of businessmen and tourists. On the other hand, I was awesome at Sunday brunch. The bluehairs loved me. Before long, I was making more money working just six easy hours on Sunday than I had been while working 35 difficult hours during the rest of the week. And the busboys who used to stand around all the time were still standing around — doing the minimum (and earning the minimum). 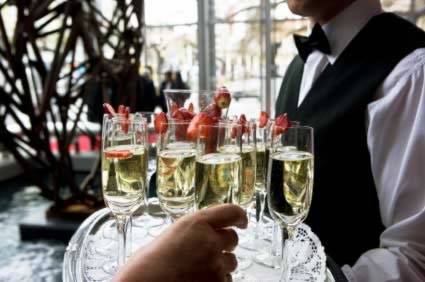 Two years later, I had a work-study job with the campus Summer Events department. Every afternoon from four to five, after my boss had left for the day, it was my job to answer the phone. And that's all I ever did. I never asked for more work. I never showed any enthusiasm for the job. I just answered the phone.

Another student covered the phone for an hour every morning. He, however, did more than he was asked. Much more.

Neither of us realized it at the time, but our boss had pull. As a result, the other student landed a plum job with the admissions office, but my own application to join residence life was denied. I found out later that my lack of initiative in that seemingly meaningless work-study job had played a significant role in the decision not to hire me. For better or worse, this changed my destiny.

In my life, I've held a bewildering array of jobs. The two listed above are just representative examples. Few of my jobs have been related in the sense of a traditional “career”, but almost all of them have provided resources, skills, or connections that I could use in the future. I'm convinced that:

Every job is a part of your career

Some workers spend forty years in the same department at the same company. This is a career in the traditional sense of the word. But my father's working life was also a career even though his jobs were largely unrelated: landscaper, flight instructor, box salesman. Your career is made up of all your jobs, whether they're directly connected or not. Each one of them is important.

Every job provides skills and resources for the future

As much as I hated selling insurance door-to-door, that job taught me lessons that I can apply directly to work on Get Rich Slowly. I learned that it never hurts to ask. I learned how to deal with rejection and negative feedback. While working at the box factory, I learned how to communicate with a huge variety of people. My brief stint as a computer programmer helped me develop techniques I now use to focus while writing. Even my job as a busboy offered lessons about the value of hard work and a positive attitude.

You don't know where life will lead you. You don't know which co-workers or customers you will meet later and in what context. My brother Tony was our company's box salesman for many years. Now he runs a firm that manufacturers nutritional supplements for animals. He's constantly drawing on the network of contacts he made while at the box factory in order to gather information about manufacturing, shipping, packaging, and distribution. In many ways, a non-traditional career like Tony's offers more opportunities to leverage relationships.

You should always do your best

Doing the minimum is rarely a good idea. Whether or not you think your current job is part of your career path, do your best. Do more than is asked of you. If you approach your work with a positive attitude, a willingness to learn, and a spirit of excellence, you will set yourself so far apart from your peers that your employers will be forced to take notice. It never hurts to do your best.

I'm not arguing that you should pour yourself into every job you ever have. But I do think you should treat most jobs as if they were important — because they are. They not only provide a source of immediate income, but it's possible that they can lead to better things in the future.

The Difference Between a Career And a Job

Not all careers have a single unifying theme. Some careers are homogeneous, but many are not. My wife taught high school science for eight years — now she works in a lab doing analytical chemistry. I was a box salesman for fifteen years — now I'm a writer. For a decade, my friend Wayne sold cars — now he's an accountant. Each of us has a career, even if the jobs do not seem to be related.

I think that for most people — whether they're on a traditional career path or not — a job is just a way to earn money. There are people who love their work, but even then not all of them are in a career. For most people, work is simply a necessary evil.

So what's the difference between a career and a job? I don't believe there is one. A career is simply a lifetime of jobs, whether those jobs are related or not. And while it's important to focus on your future goals, it's even more important to focus on doing the best you can right now at your current job.

There's one exception to the advice I've offered. In my story about the worst job I ever had, I wrote:

There are good jobs, and there are bad jobs. And then there are shitty jobs. You should strive to work only at good jobs. Sometimes you'll have to endure bad in order to meet a greater goal. But you should never put up with a shitty job.

If you are miserable at work — whether because of your boss or your co-workers or the work itself, then find another job. Don't burn your bridges, and don't do anything rash, but slowly and methodically find a new place to work. In the meantime, do the minimum. You don't have to love your job, but you should never let it ruin your life.

Calculate how much your debt costs you per month

Inexpensive Gift Ideas for Christmas (and Beyond!)

Learning to use money as a tool

Yes! Sign up and get your free gift
67 Comments
Oldest
Newest Most Voted
Inline Feedbacks
View all comments

As featured in:
113 shares
wpDiscuz