Why I buy local

Kris and I live in a small, quiet neighborhood south of Portland. When the trolley line ran through here — between 1893 and 1959 — Oak Grove was actually thriving community, with shops and stores and more. (It's true! I've seen pictures!) Now, though, downtown Oak Grove, such as it is, consists of a convenience store, a hair salon, a joint once named “the best dive bar in Portland” — and the home office of Get Rich Slowly.

There's also another business in downtown Oak Grove: a small coffee shop that opened a couple of years ago. It struggled a little at first, but eventually business picked up, and it's become a valuable part of our community. In fact, Kris and I think of the Oak Grove Coffeehouse as the only real hub our area has.

But there's a problem. This summer hasn't been kind to the Oak Grove Coffeehouse. The business is struggling. Jason, the owner, has been forced to cut back hours. He's waiting for classes to resume at the nearby high school in hopes that the teachers and students will bring a cash infusion. But for now, things look grim. Here's a recent Facebook post:

I'll admit that I haven't been supporting the coffee shop as much as I used to. Kris stops in once or twice a week on her way to work, but I've cut it out of my budget for both fitness and frugality reasons. (I'm living the latte factor!)

Why I Buy Local

Still, I feel passionately that small businesses are vital to the success of a community. It's probably because my family has owned many small businesses in the past, but I do my best to support Mom and Pop operations whenever possible, and I try to avoid national chains of all types.

When it comes to local businesses, I try to put my money where my mouth is. I vote with my dollars. Why do I buy local? For a lot of reasons, including:

There are indeed times that I'll eat or shop at a national chain, but if I have a choice, I'll almost always opt for local. Yes, there usually is. (Though not always.) But the cost differential isn't great. Even when I was digging out of debt, I was willing to pay extra to buy local. I considered a sort of “community tax” — a surcharge I paid to keep the local area vibrant and strong. That's important to me, so I'm willing to pay a little extra to make it happen.

Not everyone feels the same way, of course.

Kris and I hosted the annual Roth family reunion last Saturday. It was a smallish gathering (only about 20 adults and 10 kids), but it was lively. Roths can be rambunctious, and we're not afraid to debate with each other.

Over our sausages and sauerkraut, somehow the conversation turned to supporting local businesses. I forget why the subject came up, but it's not surprising:

As you might expect, because there are a lot of small businesses in my family, there's a lot of “buy local” sentiment. But not everyone feels that way. During our rowdy conversation, Tammy made it clear that she'd rather shop at Wal-Mart than at her neighborhood stores.

“Oh, come on,” said Tammy's brother, Ben. “There are people here from all sorts of political backgrounds, but I think there are two things we can all agree on: Monsanto is evil, and you shouldn't shop at Wal-Mart.”

“Why shouldn't I shop at Wal-Mart?” Tammy asked. “The stuff is cheap, and I don't have a lot of money to spend.”

The argument discussion continued for several minutes: Tammy vs. the rest of the Roths. When Tammy learned that her brother Ted lives 2-1/2 hours from the nearest Wal-Mart, she was appalled. “I would not like that,” she said. “Where do you get your groceries?”

“And you're paying through the nose, right?” said Tammy.

“Well,” said Tammy, interrupting. “Think what you want. I'm just not that into the local economy.”

Tammy has some valid points. National chains are successful for a reason. They're cheap, they're widely available, and they're familiar. You know what you're going to get and how much you're going to pay. You know how the system works. Working with local businesses can sometimes be…interesting. 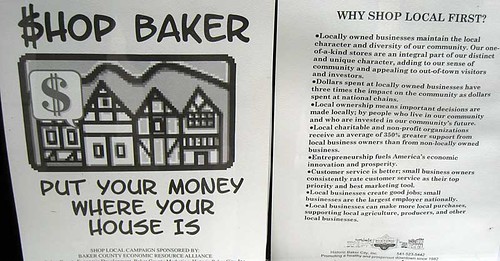 Why shop local first? Click the image to view a larger version.

Do YOU Buy Local?

Family bickering aside, the debate over the importance of buying local occasionally gets debated in communities across the U.S. Last week, for instance, USA Today posted an article about towns trying to block chain restaurants in order to preserve character and protect local businesses.

I was curious what GRS readers thought, so last week I polled my Twitter followers and the folks at the ever-growing GRS Facebook page. I asked, “Do you go out of your way to support small businesses in your neighborhood? Why or why not?” Here are some of the responses:

Most of the folks who responded on Twitter and Facebook try to support local stores over national chains, but a few do so with reservations. They're wary of paying higher prices, and some have had horrible service experiences. (National chains usually have quality standards that keep service uniformly good.)

Let me make one thing clear: I don't condemn anyone who does not or cannot buy local. I'm an ardent supporter of small businesses, and I hope that you will be too, but I'm not going to say you're wrong if you have good reasons for shopping elsewhere.

All things being equal, I suspect most people would choose to buy local. But each of us has a different price at which local is no longer an option. For some, this point is immediate: they'll always buy the cheapest option, regardless of other factors. Others — and I know a few like this — will buy local no matter the cost.

So where does my zealous support of local businesses leave me with regards to the Oak Grove Coffeehouse? What about the latte factor? What about my diet? I've made some compromises.

Twice a week for the past two weeks, I've walked up to the store on my way to the office. I buy a Mexican Coke and a cinnamon roll. (I don't actually like coffee.) Now, I know that my $8 per week isn't going to keep the place in business. But I hope that it helps a little.

Meanwhile, I'm just exercising a little harder to burn off those extra calories…

Which investments are best for Roth IRAs?

Learning from history: How this all happened

Mindful shopping: Learning to be deliberate about the things we buy and own

As featured in:
55 shares