This guest post comes from Donna Freedman, a blogger at MSN Money's Smart Spending blog. Donna is one of my favorite personal finance writers. 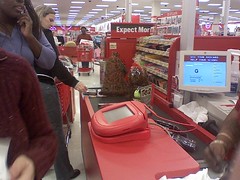 On Friday I visited Office Depot for school backpacks at the killer price of $2.99. Along with other loss-leader school supplies, they'll be donated to a local social services agency. At the checkout, I handed over a “20% off all backpacks” coupon from an Office Depot mailer. The cash register wouldn't accept the coupon. “These are already on sale so the coupon won't work,” the salesclerk said.

I noted, politely, that the coupon did not say “not good on sale-priced items.” The cashier tried again. No dice. “It's not letting it go through,” she said, and waited. I got the distinct impression she wanted me to say, “Oh, that's OK.” But I wasn't going to say that, because my belief is that a store should honor its published offers.

She called a manager, who told me the coupon wasn't intended for sale items. I again pointed out that nowhere on the coupon did it say that. This started off a 10-minute dance between manager and consumer over what would have been a $3 discount.

Before you write me off as an intractable miser, consider this: What happens when consumers do not insist that businesses keep their word?

All kinds of reasons
During our little discount minuet, the manager demanded to see the mailer from which I'd taken the ad, saying it would explain that the coupon was not good on sale items. I went out to my car and got the ad; it said no such thing.

The manager, whom I'll call Nancy, tried several other tacks. She pored over the fine print in the store's weekly ad — complaining it was hard to read because the doctor had dilated her eyes that morning — but nothing in the ad excluded coupons. She said that “corporate” never intended for coupons to be used with sale items, and that's why the computer wouldn't allow it — the computer is programmed by “corporate.”

If that's the case, I suggested, then “not valid with sale items” ought to be written on the coupon.

She looked at it again, noting the phrase “we reserve the right to limit quantities.” I'd bought five, the limit noted in the weekly flier. Nancy said, “I'll give you the coupon on one of them.” I replied that nowhere on the coupon does it say that it was good for just one item.

“It says ‘one-time use', so I'll let you have it for just the one.” I suggested that “one-time use” might actually mean that I couldn't use the coupon again the next day.

Nancy said that when I signed up for the store rewards program, I would have gotten an e-mail explaining, among other things, why coupons couldn't be used on sale items. I repeated, “Shouldn't that be written on the coupon itself?”

A real headache
The manager said she'd send my “information” to corporate headquarters and have them explain why coupons can't be used on sale items. First she asked for my driver's license, which I would not have given, and then decided that just my rewards card would do. She wrote down the card number and told me that at $2.99, the store was losing money on the backpacks. Using a coupon made it worse.

I replied that I was familiar with the concept of a loss leader: you lose money on some items to get people into the store.

Finally the manager told the cashier to override the register and ring up the discount for all five backpacks. “I don't want to spend any more time on this. I have a headache,” she said.

You and me both, Nancy. Confrontation is not easy for me. I simply wanted Office Depot to make good on its published promise.

Why you should care

Some of you are probably thinking, It's only $3 — give it up, already. I don't think that the amount matters. The company mailed me a flier full of discounts in the hope I would come to one of its stores. When I tried to use one of those discounts, employees decided that it shouldn't apply to sales.

There's a term for this. It's called bait and switch. Get the customer into the store and then change the terms.

What happened at Office Depot was not a bait and switch per se, but it still wasn't good customer relations. Yes, I understand that the company is taking a hit pricing its backpacks at $2.99 and that an additional 60-cent discount hurts even more. But that's a cost of doing business: Advertise something really cheaply and hope people buy enough other things to make the loss leader worthwhile.

Certainly any company is within its rights to limit coupon use on loss leaders. But if that's what corporate wants, then corporate needs to be very clear, and it needs to do so on the coupon. I don't want to rely on the personal interpretation of a cash register. Or a manager with a headache.

J.D.'s note: I'm proud of Donna for standing up for herself. It can seem ludicrous to fight bureaucracy for just a few bucks, but I make a point of doing it, too. (Read “I want my four dollars!” for a real-life example from the early days of Get Rich Slowly. I love that story.) Later today I'll share another tale of fighting corporate madness. Photos by The Consumerist and mlcastle.

There are 201 reader responses to "Why I Fought to Save Three Bucks (and Why You Should Too)".