You can’t always get what you want: The dark side of personal finance

I drove down to clean the moss of the roof of my mother's house last week. I spent several hours on top of the house with my cousin Nick, scraping and hosing and blowing away years of green growth. We chatted as we worked. I told him that I was going to speak with a literary agent on the following day, and that I hoped I might soon have a book deal.

“How does that work?” he asked me. “How do you make money on that?”

I did my best to explain, but it was difficult. I'm not sure I fully understand the system myself. “When a writer sells a book, he gets an advance on the profits,” I said as I scraped moss from between the shingles.

“For example, I might get a $10,000 advance. The publisher pays this to me before the book is even printed. As the book sells, I am entitled to a share of the profits from each copy. However, I see none of that until my share of the earnings is at least $10,000. Then, if sales are strong, I get paid for anything beyond that initial $10,000. The advance is guaranteed money — they can't take it back unless I don't write the book — but I don't get any more unless the book sells well.”

“And the agent?” asked Nick. He was hosing away the moss and debris I'd scraped from the cracks.

“The agent gets 15% of everything I earn,” I said. “But that's okay. In theory, she'll more than make up for it by getting me a better deal, a bigger advance. It's sort of like hiring an accountant to do your taxes. It costs you something, but in general you get more than you pay for.” 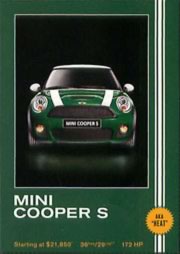 “If you do sell a book, what will you do with your advance?” Nick asked.

“That's a good question,” I said. “I don't know. What I really want to do is buy a Mini Cooper. I've been saying that for a long time now. I hate my car, and every time I see a Mini, I covet it. My advance is likely to be small, but if I got a really big advance, maybe I could afford to buy one outright.”

I stopped scraping shingles and began scooping crap out of the gutter.

“That seems so crazy, though.” I said. “I barely drive now as it is. I don't need a brand-new sporty little car. I could put that money into savings. Or into the stock market.”

I paused to think.

“Why do you have to stop wanting?” Nick asked.

“Wanting is bad,” I said. “Wanting makes me buy things.”

I was remembering Yoda's speech from The Phantom Menace: Fear is the path to the Dark Side. Fear leads to anger. Anger leads to hate. Hate leads to suffering.

I imagined that the personal finance equivalent might be: Want is the path to the Dark Side. Want leads to spending. Spending leads to debt. Debt leads to suffering.

Nick set me straight. “It's not bad to want things,” he said. “Want is good. It keeps you motivated. It makes you save and earn. Look at you. You wouldn't be where you are today if you hadn't wanted to get out of debt.”

I was about to argue with him, but then I realized that he was right. Wanting isn't the problem. Problems occur when we develop the habit of indulging every want, or wants we cannot afford.

“I want things too,” Nick said. “But I've learned that it's okay. It's fun to want things. It's even okay to buy the things you want sometimes, too, if you can afford it. It's like when you were a kid, and you cut pictures out of magazines showing the things you dreamed about. You'd save up to buy a football or a bicycle or a BB gun. That was fun.”

“I think I see what you're saying,” I said. I picked up the rake and began to sweep the oak leaves over the edge of the roof, watching them whump to the ground. “Wanting keeps us motivated. It gives us goals. So it's not a bad thing in and of itself. And it's not even a problem to satisfy some wants. The problem is when we try to satisfy all of our wants, when we get caught up in a never-ending series of wants.”

After we'd finished working, we climbed down and picked up our tools. I was cold and tired and wet. I was hungry. I wanted a hamburger. I wanted a big, juicy bacon cheeseburger, a side of fries, and a coke.

My initial reaction was to dismiss this, both for health and financial reasons, but then I thought of my conversation with Nick. I thought of the five dollars I had in my pocket. I thought of the four hours I'd just spent on the roof scraping moss. I made up my mind. On the way home, I stopped at a drive-thru and I bought a hamburger. It was delicious. It was just what I wanted.

Today, as I was writing this story, I found myself craving a hamburger again. And fries. And a coke. But today, I didn't fulfill that desire. I knew better than to fall into the cycle.

Sometimes it's okay to buy the things we want, but the constant fulfillment of desire can lead to the Dark Side of personal finance.