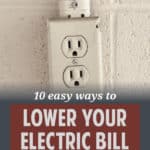 I don't know what the weather is like where you live, but here in Austin, Texas, the heat and drought are the topic of 85% of conversations (that's science).

As a native Texan, I usually roll my eyes when people lament about the heat. One of my friends summed it up nicely: “I'm tired of hearing people talk about the weather. It's hot in the summer and cold in the winter. Welcome to Earth.”

But this year is different. According to the Lower Colorado River Authority, a nonprofit public utility in Central Texas, the 10 months from October 2010 through July 2011 have been the driest for that period since 1895, when the state began keeping rainfall records. Without rain, temperatures hit record levels in June and July, which were the hottest months on record statewide. As of August 5, Austin hit 100+ degrees 52 times this summer.

Lowering Energy Use, the Lazy Way

As a result, the cost to cool our house is getting obscene. We could dial the temp up to 80 degrees, put a kiddie pool in the living room, and buy some $72 over the course of a year, install a programmable thermostat when ours works fine, or purchase a new washing machine with energy-efficient motors and pumps. If I needed new appliances, sure, I'd check out energy-efficient models, but ours are all sufficient.

I know I could be doing more to

All of these tasks should add up to noticeable savings and don't require much time or money. (Fingers crossed that ceiling fan will be an easy fix!) Once I've taken these steps, maybe I'll be ready for more. For now, it's much too hot to think about new appliances, insulation, and replacing windows. Besides, I've got triple chocolate brownies to bake.

What are some other easy ways to take a bite out of your electricity use? Share them in the comments!

There are 151 reader responses to "10 easy ways to lower your electric bill".