Programmable thermostats save you money. That's a no-brainer, right? You've seen that advice in books and magazines and on personal-finance blogs — even here at Get Rich Slowly. 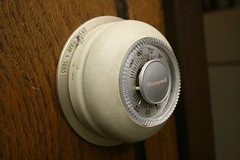 In theory, programmable thermostats are a great way to save on home energy costs.

In fact, some folks think it uses more energy (and thus costs more) to turn the thermostat down at night and then re-heat the following day. They're wrong. A 1978 research paper (“Energy Savings through Thermostat Setbacks” by Nelson and MacArthur) confirmed basic physics. On average, if you turn the thermostat down by one degree Fahrenheit for eight hours every night, you'll use about 1% less energy. (So, if you turn the temperature down by 10 degrees every night, you'll use about 10% less energy.) But note that you'll see less savings in milder climates (the bigger the difference between indoor and outdoor temperatures, the more you save by adjusting the thermostat) and with electric heat.

Based on this, it makes sense that a programmable thermostat could reduce energy usage. You simply program the thermostat to warm (or cool) your home when you're actually there; when you're away (or asleep), the thermostat switches off. As is often the case, though, practice is different than theory.

Consumers are often advised that installing a programmable thermostat can save them anywhere from 10 to 30% on the space heating and cooling portion of their energy bills. While reliant on proper use of the programmable thermostat, such savings are easily true in theory; however, there needs to be more field-tested data to better substantiate savings claims. Analyses from recent field studies have suggested that programmable thermostats may be achieving considerably lower savings than their estimated potential.

How much lower? In 2007, RLW Analytics prepared a report for GasNetworks, a New England-based energy company. “Validating the Impact of Programmable Thermostats” [PDF] found that using an Energy Star-certified programmable thermostat produced an average savings of about “6.2% of total household annual natural gas consumption”. Those who installed programmable thermostats into older heating systems (in other words, those who didn't install a new heating system at the same time) saved an average of 6.8%.

And that study painted the rosiest picture of programmable thermostats.

Note: The New England study also found that people who micromanage their manual thermostats use more energy than those who just leave them at predefined points for longer periods of time.

In 2000, the Energy Center of Wisconsin published a report entitled “Programmable Thermostats Gone Berserk? Taking a Social Perspective on Space Heating in Wisconsin” [PDF]. The study found, in part, that:

These details and the conclusions above lead us to suspect that the aggregate savings that can be expected from the installation of programmable thermostats in residential housing is probably quite modest.

Sure, those who programmed the thermostat used less energy when they weren't around; however, they tended to set the thermostat much lower for the times they were home. As a result, the folks who did nothing saved more energy.

Why is there a discrepancy between the theoretical and actual savings with programmable thermostats? Because the proposed savings were, in actuality, theoretical. That is, they were based on computer models and not on real-world experience. Now that there's enough real-world data, it's clear that programmable thermostats have only a minimal impact on energy consumption. As in other areas of personal finance, it's human behavior that make the most difference.

In May 2009, the EPA suspended Energy Star certification for programmable thermostats [PDF], writing:

EPA has been unable to confirm any improvement in terms of the savings delivered by programmable thermostats and has no credible basis for continuing to extend the current Energy Star specification.

Programmable thermostats can save money — not just in theory — buit only if they're used correctly. Pick your set points based on your household's habits, and then leave them there. Don't fuss with the thermostat. The following is a typical energy-efficient program:

Our thermostat is programmed for 65 when we're home and 58 when we're away or asleep. It kicks on about an hour before we wake or arrive home. (We don't have a cooling system, so the thermostat doesn't get used from June to October.)

After all these words, the bottom line is common sense: Whether you use a programmable thermostat or not, if you turn down the heat (or turn off the air conditioning) when you don't need it, you'll save money.

Further reading: This entire article reminds me of last year's post about money myths and the importance of thinking for yourself. Remember: Nobody cares more about your money than you do. Don't just take someone else's word about financial matters — not even mine. Conduct your own tests and experiments. Read. Draw your own conclusions. Do what works for you.

Footnote: This post was inspired by a discussion at The Simple Dollar, in which “Lurker Carl” pointed out that programmable thermostats have come under fire. His comment prompted me to spend three hours researching this stuff and another two hours writing up my findings.

There are 130 reader responses to "Do programmable thermostats really save money?".