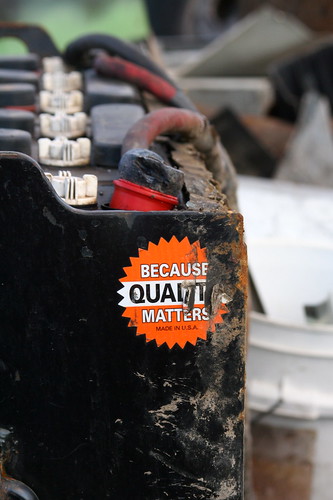 Like many of you, I'm a proponent of quality over quantity. I'd rather buy one good coat that will get me through three seasons and last for years than replace a poorly-made, cheap one every year.

But it's important to consider that expense is not necessarily an indication of quality. And even when the more expensive item is of higher quality, it might not be the best buy.

The following are five examples that illustrate that the more expensive option isn't always worth the extra expense.

While researching this post, I happened upon countless articles advising to spend big on a quality chef's knife. That's exactly what I was planning to do a couple of years ago, until I read the Cook's Illustrated review on chef's knives. (For me, Cook's Illustrated is the final word in cooking — they've never steered me wrong.) They tested brands that varied widely in price, giving the highest rating to a $30 Forschner Fibrox knife, noting that “knives costing four times as much would be hard pressed to match in performance.” I can attest that it's a good one.

Food writer Mark Bittman says in most restaurant kitchens chefs use an eight-inch, plastic-handle stainless alloy chef's knife that costs $10 at a restaurant supply store. Bittman also shows readers how they can equip a basic kitchen for $200.

It seems despite the standard advice of “investing” in a chef's knife, the pros use and recommend the cheaper ones.

There are a few exceptions to the rule, but in general, generic brand medications are equivalent to their brand-name counterparts. According to the U.S. Food and Drug Administration (FDA), generics can be sold at a substantial discount because generic manufacturers don't have to pay investment costs to develop the drug. The FDA requires generic drugs to have identical purity, quality, strength, and stability as brand-name medications.

The prescription drug commercials we see on TV would have you believe that their brand-name drug is superior, but the FDA says it isn't so.

Haje Jan Kamps from Photocritic.org on why he doesn't need an expensive camera:

All I'm saying is that at my level (and, I wager to say, at the level of many other photographers), the 450D (and any equivalent low-level SLR cameras) are plenty good. The problem with photography is that it's simply too tempting to splash a lot of money for everything and then end up bankrupting yourself on the wrong things.

I used to have a bad habit of thinking that I needed the newest and most expensive Stuff for both established and new hobbies. It's tempting to get top-of-the-line equipment, but most of it is unnecessary unless you're a professional. A pricey camera won't make you a better photographer.

J.D.'s note: April is absolutely correct. A better camera does not equal better photos. Lenses are much more important. And most folks would be much better served by paying a couple hundred bucks to take a photography class at the local community college.

One beauty blogger decided to pit Creme la Mer against Crisco (yes, you read that correctly, the big, blue tub of vegetable shortening). It turns out that everyone from beauty experts to doctors recommend Crisco as a serious skin moisturizer, and in the blogger's trial, there was minimal difference between the La Mer side of her face and the Crisco side. A 16-ounce tub of Crisco is about $3.50. A 16-ounce jar of Creme la Mer is $1,350.

I can't say I'm going to try this one myself, but it shows that there are cheap and effective skin care alternatives that work just as well as the ones that cost a fortune.

In Evolved Primate, a Psychology Today blog, social psychologist Daniel R. Hawes discusses an experiment where wine tasters rated the same wine differently depending on what they thought it cost.

The study suggests that we perceive the quality and likability of a wine relative to its price.

In the article Expensive Wines Doesn't Always Mean They're Better, wine critic and author Matt Kramer writes that a more expensive wine is better than a less expensive one to a degree, but not to an extreme degree, and price is determined by many factors:

…there's no “right price” for a wine. If you can get people to pay a high price, because of quality, public relations, high scores, marketing muscle, or just plain luck, well then, you've found the right price. It's that simple — and that complex.

My favorite wine is Brunello di Montalcino, but it's expensive and therefore a rare treat. I have to wonder how I'd fare in a blind taste test, though. Is it truly the taste of the wine I enjoy, or the feeling of indulging myself and the memories of the little trattoria in Florence where I had my first glass?

More expensive products might be perceived as more attractive — which could increase demand — but they are also more expensive, which our study showed decreased demand.

In other words, I may think a $1350 jar of moisturizer is superior to a tub of Crisco, but that doesn't mean I'm blowing the rent on face cream. Score one for consumer sensibility.

What are some more examples of when the expensive product isn't the best option or the highest quality? What is the cheaper solution that works better?

There are 108 reader responses to "Do you get what you pay for?".