How to Find a Contractor: It’s Not Just About Price

On Monday I mentioned that it pays to shop around for the lowest price. This skill is specially important when making large money decisions. You should always shop around when purchasing a car, obtaining a mortage, or hiring a contractor. We've discussed getting the best deal on a car before. We've touched on mortgages, and are sure to discuss them more in the future. Today I want to share my approach to finding a contractor.

The New Roof
We bought our first house in the spring of 1993. The roof was in bad shape and needed to be replaced before we could close the deal. Fortunately, we had a good working relationship with the seller: he offered to grant us a $2,000 credit if we would take care of finding a roofer.

I had never done anything like this before, nor had any of my friends. I looked in the phone book and found a local roofer. When I called, he could sense that I was confused, so he talked me through the process, asking about the size of the house, the slope of the roof, the material we wanted to use, the condition of the existing shingles. He gave me a quote of $2300.

I called two more places. One quoted $2500 and the other quoted $1800. But the last place couldn't do the roof repair for three weeks. Three weeks!?! I needed it done by the following weekend. This was getting complicated.

I got out a sheet of paper and made a list.

I spent my lunch-breaks during the next two days calling roofing contractors. When I was finished, I had a list of twenty bids. The lowest quote was $1200; the highest was $4800. (I've never figured out why that bid was so out of range.)

I had created this list on a whim, but found it invaluable. After eliminating from consideration those contractors who couldn't meet the time-frame and those that would not offer a strong enough guarantee, I had a list to six or seven potentials. The contractor I hired did not offer the lowest price, but he:

Though this contractor wasn't the cheapest, the $1800 net cost was relatively low. A friend and I spent a long weekend ripping off old shingles and nailing down new ones. It was hard work. I learned something about roofing in the process, and for the decade we lived in that house, I was filled with a sense of pride whenever I had to climb on the roof to clean the gutters.

In the summer of 2006, we had to repair a section of the roof on our current home. We didn't call twenty contractors this time, but we did call half a dozen. Again there was wide disparity in the bids: they ranged from a low of $300 to a high of $3000. We chose a company that quoted $800, but which seemed to understand what we wanted.

The Bathroom Remodel
When we bought this house, we knew that the bathroom would have to be remodeled. It was a mess, filled with eighty years of shoddy add-ons: 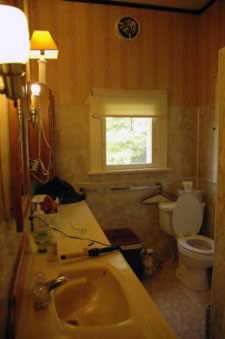 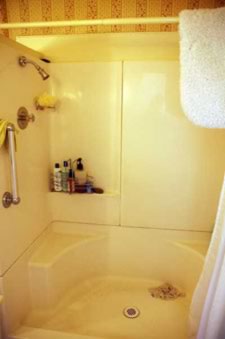 We went to the Portland Home & Garden Show to get ideas. There we found a company whose work we loved, and invited them to bid. They gave us an estimate of $34,000. That was more than twice what we had planned to pay.

Kris found a web site that matched jobs with contractors, and it paired us with a fellow who gave us a bid of $15,000. That was exactly at our budget (probably because we had to tell the web site what our budget was), but we weren't confident that this contractor was listening to what we wanted. He didn't seem competent.

One of Kris' co-workers recommended another contractor. We met with him, liked him immediately, felt he was playing fair with us, and were pleased that he could meet our timeline. He quoted us $18,000 — $21,000 if we did everything to code and got all the permits, etc. We chose the latter option.

In retrospect, we probably could have spent more time to find a lower bid. But we were pleased with the final results, and plan to hire this contractor again in the future.

Some people feel guilty asking a company for a price quote and then not using them. Don't. That's how it works. The company isn't offended. They quote similar jobs every day. Sometimes they get the work — sometimes they don't. Your priority is finding a company that you can trust to do the work at a reasonable rate.

When comparing prices, be sure you match apples to apples. The deal from Rock Bottom Cabinets might not be so impressive if they don't offer any sort of guaranty on their workmanship. Consider the following when making your decision:

You can also save money by doing some of the work yourself, but that's a subject for another day!

Save Money by Reducing Subscriptions and Avoiding Long-Term Contracts

How to take a sabbatical

Are We There Yet? How Will You Know When You’re Rich?