Making the move from spender to saver 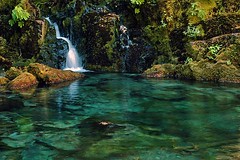 I pulled out my camera gear last night. It's been two years since I used it regularly. Before I started Get Rich Slowly, I seriously considered trying to become a professional photographer. But for a long time now, my camera stuff has been gathering dust in the corner of my office. I can't even remember the last time I used it.

It's fun to look at all my equipment again. It's fun to handle it, to imagine the possibilities. I'm eager to get outside and make some images. (Kris and I are going to a garden show this afternoon, and I'm taking the camera with me.)

As I sorted through my bodies and lenses, though, I had to shake my head. I bought a lot of the gear on credit. For a time, I had the photo bug, and in a bad, bad way. I craved new lenses and bigger memory cards and fancy filters. I wanted to take expensive photography courses. There was always something bigger and better to buy.

When I was in debt, when I was living paycheck-to-paycheck, it was always like this. I knew I should save or pay down debt, but I spent my money on comic books and camera gear. I spent it on books and bikes. I got a perverse thrill from spending money I knew I could not afford to spend. In some ways it made me sick — I felt guilty, it gnawed at my gut — but in others, it gave me a sense of exhilaration. If I had cash in my bank account, I spent it.

Somewhere along the way — perhaps the moment I got out of debt — my mindset moved from spender to saver. I once viewed money as something to spend — now I see it as something to save. I still indulge myself now and then — I just picked up Mario Kart Wii, for example — but the urge to spend all of my money is gone. It's vanished. It doesn't give me a thrill anymore.

It wasn't easy for me to switch from spender to saver. If you're trying to make a similar transition, consider the following techniques:

I haven't shaken the urge to spend completely. After playing with my camera equipment last night, I was curious what sorts of new gear was available. I spent twenty minutes on Amazon, drooling over the Nikon D300. I'm tempted — but not much. I'd rather save that $1,800 for the future. I'm a saver now, not a spender.

Should repaying debt be an obsession?

Tim Ferriss on the Power of Personal Entrepreneurship

Beware of scams and pyramid schemes