At Get Rich Slowly, my goal is to help you make the best possible decisions with your income and spending. Having said that, we're all human. We all mistakes. We all do dumb things with money. And I feel like April Fools' Day is the perfect time to talk about some of the stupid things we've done in the past.

Let me give you an example (or three) from my own life.

To begin, I'll retell a classic tale of my financial foolishness, one that has delighted my readers for over a decade. It's all about how I paid $1500 for a “free” Frisbee. 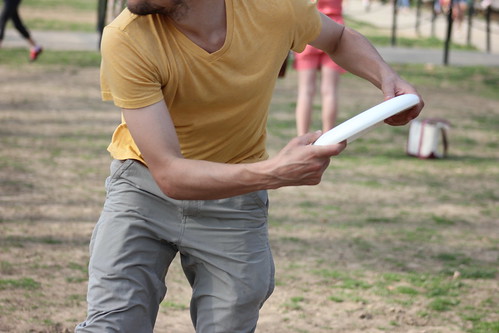 On the first day of college, I opened my first bank account. The gym was filled with registration tables, not just for classes and clubs, but also for banks and credit cards. Since I was receiving a small stipend to cover living expenses, I needed a checking account.

The two banks vying for attention used different methods to attract students to their tables. A small local bank had a sign that promised “free checking”. A large national bank gave away a Frisbee to anyone who opened an account. The choice seemed easy: I wanted the Frisbee.

I signed up for my checking account, deposited my money, and got my free Frisbee. I spent the afternoon on the quad tossing the disc back and forth with my roommates. When it was time for dinner, I took the Frisbee up to my room, put it in the closet, and never used it again. Ever. But I had that checking account for nearly two decades.

Classes started. I forgot about the Frisbee and the checking account. The next month, I received my first bank statement. There was a $5 service charge. It didn't seem like a big deal. I figured it was part of the package, part of being a grown-up. My parents had always paid a service charge on their checking account, and I expected I always would too.

For the rest of my college career, I paid $5 per month to maintain my checking account. When I graduated, I continued to pay $5 per month. During the 1990s, that fee increased to $8 per month, but I barely noticed.

In fact, I paid a monthly fee for checking from September 1987 until June 2004. For 202 months — nearly seventeen years — I paid for the privilege of writing checks. Then, when I started turning my financial life around, I left the major national bank and moved to a local credit union. I've had my checking account at that credit union for nearly fourteen years now and have never been charged a fee of any kind.

One foolish choice as I entered college cost me nearly $1500 — enough to buy about one hundred Frisbees. And that's just one of the foolish financial choices I've made in my life.

On 21 July 1995, my father died after a long battle with cancer. Before he died, he managed to take out a very bare bones life insurance policy. (He hadn't thought to acquire life insurance before he contracted cancer. After he got sick, nobody would insure him. Or, more precisely, one company would — but only minimally.) When the dust from his death had settled, Dad had managed to leave each of his three sons $5000 in life insurance money.

A smarter man than I was might have taken this money and applied it directly to his $20,000 in credit card debts. That's not what I did. Instead, I put $1000 toward my debt and patted myself on the back. I took the other $4000 and bought a fancy new computer — a Macintosh Performa 640CD DOS-compatible — and lots of computer games. Then, to make matters worse, within weeks I maxed out my credit cards again, effectively negating the $1000 I had put toward debt reduction.

There's no question: The old J.D. was foolish with money. But even after I started reading and writing about money, I still made some foolish mistakes.

True story: I still owned that Macintosh Performa 604CD DOS-compatible personal computer until last autumn. After Kim and I returned from our cross-country RV trip, my ex-wife contacted me. “You still have a bunch of computer stuff in a shed at my place,” she said. “Can you get it out of here.” One of those computers was that twenty-year-old reminder of my foolishness. I gave it (and all of the other computer stuff) to a middle-schooler I know.

As I began to manage my money wisely during the mid 2000s, I made sure to fully fund my Roth IRA every year. But I hadn't yet discovered the virtue of index funds, so I put my retirement money into individual stocks. But not just any individual stocks. I thought I was savvy enough to spot beat-up stocks that were bound to recover. Hahaha. I was wrong.

In the fall of 2007, for instance, I had dinner with a friend who worked in the corporate office of The Sharper Image, a company that manufactured fun and fancy gadgets. The company's stock was in the toilet, but my friend said that management was certain that things would soon turn around. It was just a passing remark in a much larger conversation — he wasn't trying to get me to buy the stock — but it planted a seed in my brain.

The next day, I had to decide how to invest $3500 of that year's Roth IRA money. I should have done some research. I should have put the money in index funds. (I had just begun learning about index funds, but hadn't yet become a die-hard proponent of them.) Instead, I bought $3500 of Sharper Image stock at $3.14 per share. I was gambling, plain and simple. And I lost.

Within a few months, The Sharper Image declared bankruptcy. Overnight, the value of my investment dropped from $3500 to $200 — and then to zero. It's still worth nothing today, over a decade later. It will never be worth more than that. Yet I keep those 1115 shares in my Roth IRA just to remind me of how foolish I was.

It's not just me, of course. We all make mistakes now and then. Some of them are minor, but some of them are doozies. Last year, I asked members of the Money Boss group on Facebook to share some of their biggest money mistakes. Here are a few of my favorites.

First up, Nate tells how he and his wife bought a timeshare…and wish they hadn't:

Then there's Amy, who made the same mistake I see people make again and again and again: Cashing out their retirement accounts when they switch jobs.

Adam regrets not being more motivated when he was younger. Instead of working hard, he just goofed around. (Oh boy, can I relate to this one!)

Megan wishes she had started tracking her spending at an earlier age:

Richard's biggest mistake was buying into the traditional advice that you only need to save ten or twenty percent of your income for retirement. Life many of us, he eventually realized that by saving more, he could have more:

A lot of readers mentioned they made mistakes by marrying somebody who had different financial aims than they did. But Tyler was the only one who realized his mistake was keeping his wife in the dark:

I'm sure you have made money mistakes in the past too. Maybe you're still making them — or suffering the consequences of past mistakes. Feel free to share your story in the comment section below!

Coping with Mistakes and Setbacks

As I said, even smart people make mistakes. That's part of being human. But smart money managers do what they can to minimize the effects of mistakes before they ever occur. Here are two ways you can mitigate the damage caused by foolish choices:

Even when you're prepared and educated, you're still going to make mistakes and suffer unexpected setbacks. It's important to know how to pick up the pieces after things fall apart. Here are some strategies for minimizing the damage:

Setbacks are disheartening but remember: Failure is okay. Mistakes are lessons in disguise. There's a Japanese proverb about perseverance that translates as “fall down seven times, get up eight”. Successful people fail just as often as unsuccessful people; the difference is that successful people learn from their mistakes, get back on their feet, and resolutely march in the direction of their desires.

If you've made some foolish choices or had some bad stuff happen to you — or both — don't give up. Use the mistakes to launch yourself on a new path. It's never too late to change direction and start making smarter choices. Build your future from the ashes of the past.

There are 16 reader responses to "Foolish money mistakes — and how to avoid them".